Supreme Court judges rule that Rabbinical Court is unauthorized to order woman to circumcise her son as part of divorce trial.

An extended panel of seven High Court judges on Sunday accepted a petition filed by a woman who had been forced by the rabbinical court to circumcise her son. The High Court of Justice ruled that "the rabbinical court was unauthorized to discuss the dispute over the circumcision issue, and there is room to annul any decisions made on the matter."
Ancient Ritual
The fear behind circumcision
Yair Eldan
Op-ed: How is it possible that even bleeding hearts, pacifists and anarchists, who support a radical theory of personal autonomy, perform this barbaric ceremony?
The fear behind circumcision
According to the decision, which was made by a majority of six judges against one, the rabbinical court is unauthorized to tie the circumcision issue to a divorce case. The child's father stated following the High Court ruling that he would continue fighting for "the child's wellbeing," saying that he would appeal the Family Court, "as recommended by the Supreme Court." About five months ago, in an unprecedented manner, the High Rabbinical Court rejected a petition filed by a woman against a district court in Netanya, which forced her to circumcise her son at his father's request. The judges said they were under the impression that the woman's refusal to circumcise the infant was simply a tool to improve her achievements in the divorce battle, and therefore decided not to accept it. The rabbinical court judges warned against a precedent that would turn the matter into a tool in similar battles. They wrote that an absolute majority of the Jewish people sacrificed themselves throughout the generations in order to perform the circumcision – and not just religious people and stressed that the baby's father must observe the mitzvah. "It is unthinkable that the matter of performing or failing to perform the circumcision will be taken away from Jewish scholars and be subject to the consideration of a civil court, when each one has his own opinions and worldview – this will not happen in Israel, God forbid," the judges said. The woman was ordered to pay a fine for each day in which she failed to circumcise her son.

The mother petitioned the High Court of Justice with the help of the Justice Ministry's Civilian Legal Aid department, arguing that the High Rabbinical Court had exceeded its authority by discussing the father's demand to circumcise his son.

The mother's representatives, attorneys Marcella Wolf and Avigdor Feldman, claimed that the rabbinical court is unauthorized to order the circumcision of a minor when one of his parents opposes it.

The father, on the other hand, said his son had not been circumcised after his birth as he was born prematurely, and that his physicians had recommended that the circumcision would be performed once he grew stronger. According to the father, he and the mother agreed that they would circumcise the child as soon as it was possible. He argued that the mother's objection stemmed from her attempt to make his accept her demands as part of the divorce proceedings. 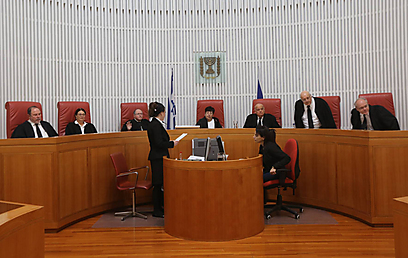 High Court rules against 'an irreversible physical act performed on the body of a child who is not part of the divorce proceedings' (Photo: Gil Yohanan)

Justice Miriam Naor, who wrote the main ruling, said that there was no justification to tie the circumcision issue to the divorce case.

She noted that both parents had the right to voice their opinion on the circumcision issue, and that "therefore, this is a dispute which could also rise between a couple which is not in the midst of divorce proceedings or a couple which is not even married but shares a child." The court concluded that the circumcision was "an irreversible physical act performed on the body of a child who is not part of the divorce proceedings," and a decision involving "questions related to basic rights such as freedom of religion or freedom from religion, as well as social and cultural considerations. "In a dispute between parents on such an issue, which is ruled by the principle of the child's wellbeing, it is undesirable to make a decision as part of the divorce proceedings between the child's parents." Judge Naor noted that the father was entitled to turn to the Family Court to discuss the issue regardless of the divorce trial.

Justice Elyakim Rubinstein, in the minority opinion, said he believed the circumcision issue could be tied to the divorce proceedings.

"I look at Israel as a Jewish and democratic state," he argued. "I believe there is room for a Jewish father or Jewish mother to include a question related to the essence of their son's Jewishness in a divorce case." Rubinstein noted that the court should look at the matter from a wider angle than the one presented by Justice Naor. "A Jewish child's essence as a Jew is one of the issues which can be tied to a divorce, otherwise a parent would not be able to tie a cardinal and fundamental issue about his or her child's life in the separation arrangements from his or her partner." Rubinstein added that the case should be returned to the rabbinical court, which would make a decision after receiving an opinion on the best interest of the child. "The fact that most Jews in Israel – both secular and religious – circumcise their sons speaks for itself," Justice Rubinstein said. "There is no need to mention the social abnormality an uncircumcised Jewish child could suffer in Israel, as well as Israel's stance against countries opposing circumcision, and its medical virtues." The child's mother told Ynet in the past that she and her husband had mutually agreed not to circumcise the baby.

"The objection to circumcise my son came after I was exposed to all the information on the issue, and studied and investigated it. I realized that it was healthier not to circumcise, regardless of the divorce proceedings… He didn't object, there was a one-year silence, and then it was raised for the first time in the rabbinical court. I began trembling, I was in total shock."

The father, on his part, claimed that "during the discussion it became clear beyond any doubt that it was the mother who had changed her mind about the circumcision because of the divorce proceedings. I wanted to circumcise the child from the beginning, and I still want to. I even have text messages from the mother, in which she asked me who would be the mohel."