In squares and at junctions across the country, people converge to share national grief after discovery of murdered boys' bodies.

Hundreds of Israelis spontaneously gathered Monday night in different locations across the country to mourn in solidarity with the families of Naftali Frenkel, Gil-Ad Shaer, and Eyal Yifrach.

Some 300 teenagers flocked to Rabin Square in Tel Aviv while dozens of youths met in Zion Square in Jerusalem. Hundreds also converged on junctions along Route 60, from Gush Etzion to Hebron, in order to pray, sing, and light candles for the deceased. 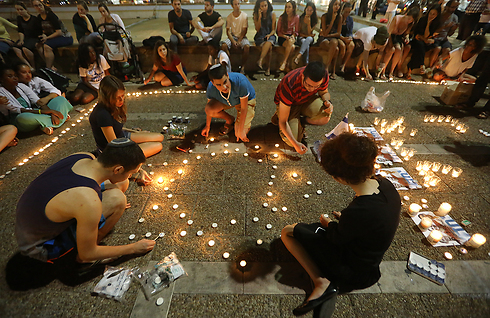 A crowd also gathered near Abu Kabir Forensic Institute, where the bodies of the three boys were transferred for identification. Candles were lit in the memories of the teens. 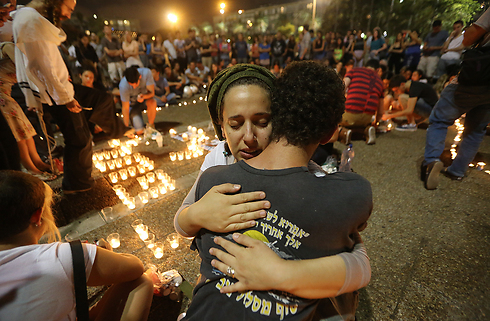 The yeshivas where the boys had studied also became gathering centers. "We cried a lot together, this is a very hard day," said Misha-El Rubin, one of the rabbis of Shavei Hevron, of the moment they heard that Eyal's body had been found. 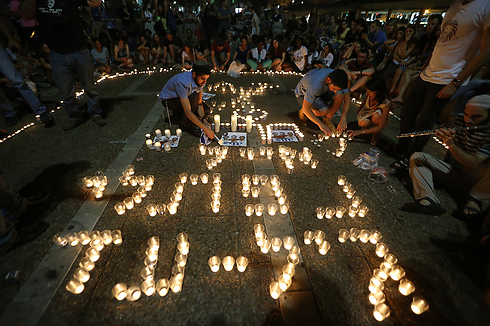 "It is clear that those who had the time to get to know Eyal felt a deep personal loss, but this is bigger than that, this is a national matter," he added. 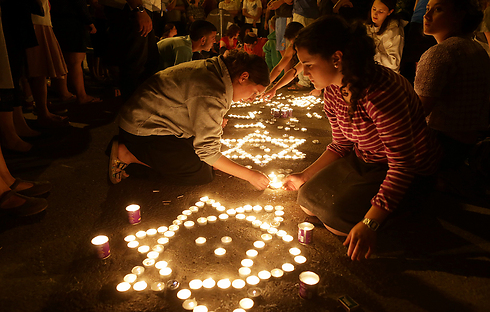 Several hundred people waving Israeli flags and expressing grief and solidarity held a vigil in New York on Monday after the bodies of three missing Israeli teenagers were found in the occupied West Bank.

The kidnapping near a settlement in the West Bank appalled Israelis, who rallied behind the youngsters' families in a display of national unity reminiscent of times of war or national crisis in a country with deep political and religious divisions.

Earlier on Monday, US President Barack Obama condemned the killings but called on all parties to exercise restraint.

Mourners gathered on a busy Manhattan street outside the Israeli Consulate and then, carrying placards bearing the names of the three Jewish seminary students, marched to the Isaiah Wall directly across from UN headquarters.

Many in the crowd said they had come because they felt powerless and wanted to express support publicly for the families.

"It's hard being so far away and feeling there is so little I can do," said Ilana Shrier, 25, a commercial real estate agent and Hebrew teacher.

Israel has vowed to punish Hamas, the Palestinian group it accuses of abducting and killing the teens – Gil-Ad Shaer and US-Israeli national Naftali Frenkel, both 16, and Eyal Yifrach, 19.

Israeli security forces on Monday located the bodies of the three Israeli teens who went missing on June 12 while hitchhiking in the Hebron area of the West Bank.

The three bodies were found around 6 pm in a shallow grave dug by their abductors in the wadi between Beit Khalil and Halhul. According to initial estimates, the boys were shot shortly after their kidnapping, in a premeditated plan by their abductors.

Omri Efraim and Noam 'Dabul' Dvir contributed to this report.