Hundreds of protesters block central entrance to Israeli capital, chanting "Death to the Arabs" and "Muhammad is dead"; 10 arrested for attacking Arab youths.

Some 400 protesters, including rightwing extremists and Beitar Jerusalem football fans, blocked the central entrance to the Israeli capital on Tuesday afternoon. The demonstrators clashed with police near the Jerusalem Chords Bridge, calling out “Death to the Arabs”, “Muhammad is dead”, and “No Arabs, no bombings.” Ten of the activists were arrested for attacking Arab youths.  The rightwing activists chanted insults to Arab members of Knesset Haneen Zoabi and Adhmad Tibi. The protesters also distributed stickers: “No more government chatter – we demand revenge.” Some of the demonstrators placed the stickers on moving vehicles, and others threw debris at those driving past. 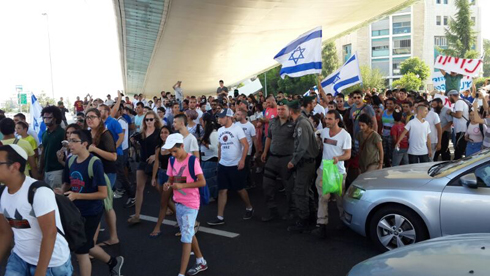 Jerusalem Chords Bridge protest (Photo: Noam Dvir)
The demonstration led to escalating traffic jams, and the limited number of police officers on the scene was struggling to maintain the peace. The protest took place as the same time as the funeral procession of Gil-Ad Shaer, Naftali Frenkel, and Eyal Yifrach whose bodies were discovered in a shallow grave dug by their abductors in a wadi between Halhul and Beit Kahil. 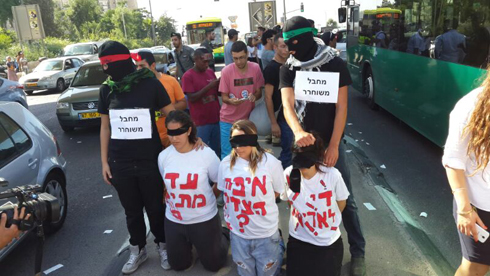 Photo: Noam Dvir
The bodies of Eyal, Gil-Ad and Naftali were found thanks to a bush that was out of place, troops who found the teens said. 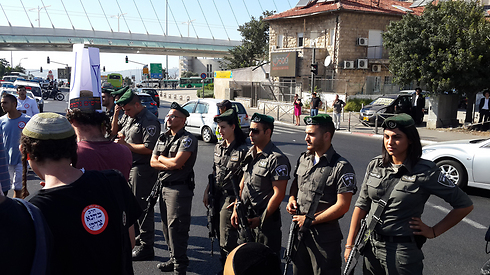 "We split into teams and started searching water holes, caves and structures. There was a big ruin there. Suddenly, one of the guys looked and saw an agricultural terrace with some bushes that didn't fit the turf. The bush was half green-half brown, and looked as if it was uprooted from the ground. It seemed odd to him. He moved the bushes and saw a pile of rocks underneath. After clearing the rocks, the bodies were found." 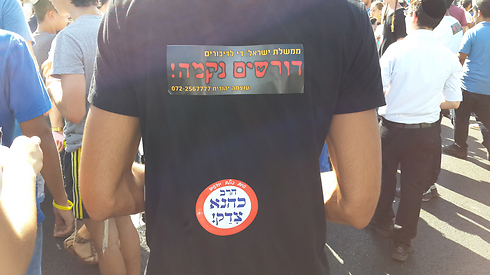 It is believed the kidnappers planned to kill the abductees and keep the bodies until they could be exchanged. As such, they never released any demands to Israel, in keeping with the modus operandi of Hamas in the West Bank.

Amar Abu-Eisha, 33, and Marwan Kawasmeh, 29, from Hebron, Palestinian terrorists who previously served time in Israeli prisons, were named by Israeli authorities as the two main suspects in the abduction. The IDF and Shin Bet have conducted a manhunt for the pair, but have yet to locate them.