Deaths of teens sparks calls for retribution and reconciliation in Israel

Israeli public shocked following deaths of three boys, leading many calls for bloodshed and revenge. However, some Israelis urge peace.

With emotions running high following the abduction and murder of three Israeli Jewish teens in the West Bank, Israelis have taken to the streets and social media to express their feelings, some more controversial than others.

A string of new Facebook pages calling for revenge for the three murdered Israeli teens have been created in wake of the discovery of the bodies of Eyal Yifrach, Gil-Ad Shaer and Naftali Frenkel on Monday, garnering tens of thousands of likes. 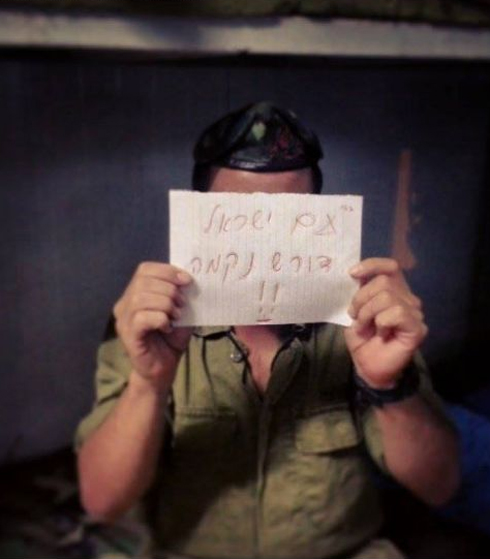 "The State of Israel demands revenge"

The international head of the Bnei Akiva religious Zionist youth movement, Rabbi Noam Perel also called for retribution on his personal Facebook account, in a post urging IDF soldiers to take the foreskins of 300 Palestinians in revenge.

“A whole nation and thousands of years of history demands vengeance,” the secretary-general of Bnei Akiva wrote, urging the government to turn the IDF into a “force of avengers”.

Perel later expressed regret over any anger the comments had caused, saying in a post on the World Bnei Akiva Facebook page that his remarks had been "misunderstood".

"Following the discovery of the bodies of the three students, Eyal, Gilad and Naftali, murdered in cold blood, I wrote a Facebook post that has been widely misunderstood," he wrote. "My words have been misrepresented due to their biblical and poetic style. I deeply and unreservedly apologise for the anger that this has caused. Particularly in times of national tragedy it is incumbent upon leaders and educators to be more precise and careful in words than I have demonstrated."

Other Facebook pages created by Israelis also called for a violent response to the murders.

“We won’t let them murder us, the history cannot repeat itself. Revenge on Arabs now!”, wrote the creators of the Facebook page titled “Revenge on Arabs”, that already has more than 3,000 followers and has accumulated 34,000 likes since it was first opened last Monday. 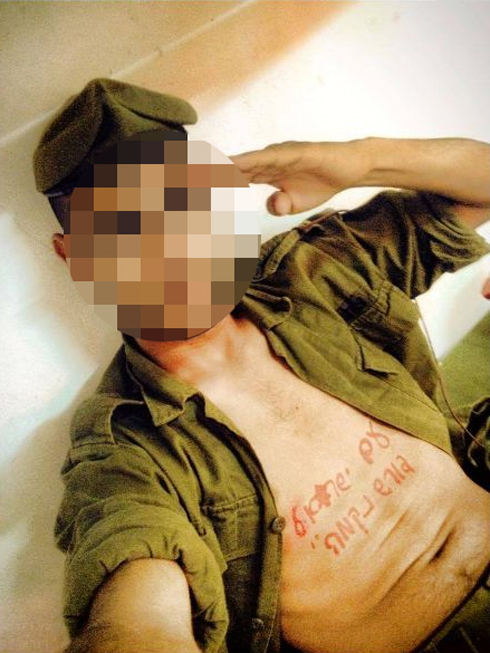 "The State of Israel demands revenge"

The vengeance-vowing page is just one of several pages that were opened in recent days on Facebook, dedicated to relieving anger following the murder of the three teens.

In one of the posts that the page moderators added, a graphically manipulated image displays singer Justin Bieber holding up a sign reading: “Revenge on Arabs! Revenge for Eyal, Naftali and Gil-Ad.” 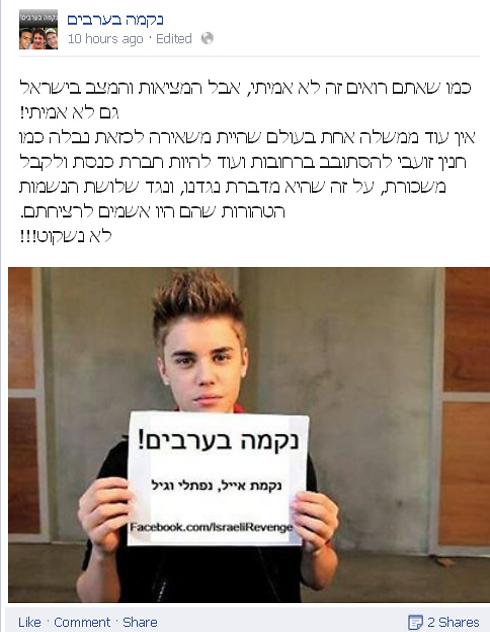 The caption alongside the picture reads: “As you can see, this is not real, but the reality and the situation in Israel is unreal as well.” 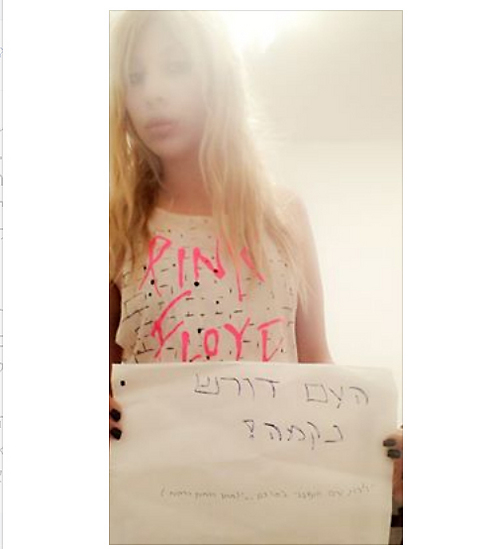 Similar to the “David the Nahlawi” affair, that surrounded an IDF soldier removed from his post in the combat Nahal brigade, who won massive support online through a Facebook campaign calling for him to be reinstated, soldiers also decided to express their opinions on these pages as part of a viral protest.

After the “Revenge on Arabs” page moderator published a post on Tuesday urging citizens and soldiers to post photos of themselves holding up signs reading “Israel demands revenge”, many soldiers rose to the challenge. “We want you to join us for this very important struggle,” the post said.

One photo published on the page displayed two soldiers of the Kfir brigade holding up a sheet of paper on which was written: “We too, fighters of the Kfir brigade in the Netzach Yehuda Batallion (made up entirely of Orthodox Jews), support the death penalty for all terrorists who have an open hand. We have come to take revenge.” 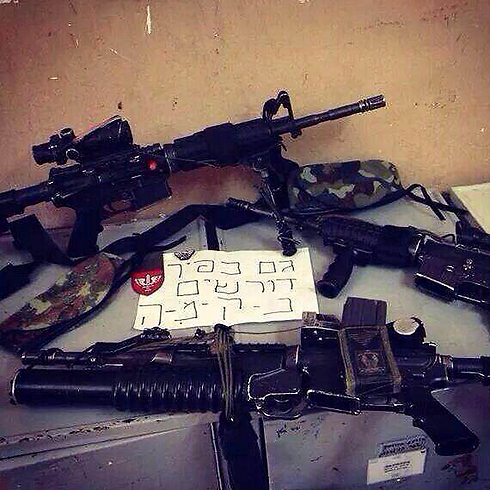 The Facebook group also includes a picture of a soldier holding a MAG machine gun with the words “Revenge! 97 (the number of the Netzah Yehuda Unit)” written on his body. Another soldier posed while saluting, with the writing “Israel demands revenge” on his body. 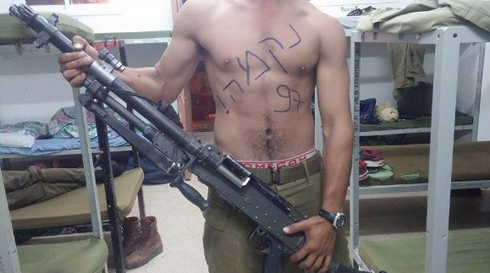 The IDF spokesman sought to clarify that such incidents in which soldiers are involved in sending racist pictures and calling to harm innocent people are inconsistent with what is expected of IDF soldiers. It was further added that any incident of the kind that comes to the knowledge of officers will be treated with great severity.

Another page, also opened on Monday and titled “The people demand revenge”, features as its main cover photo an image of the three teens with the caption “May God avenge their blood”. The page, that accumulated 2,090 likes, features various posts by people calling for revenge. 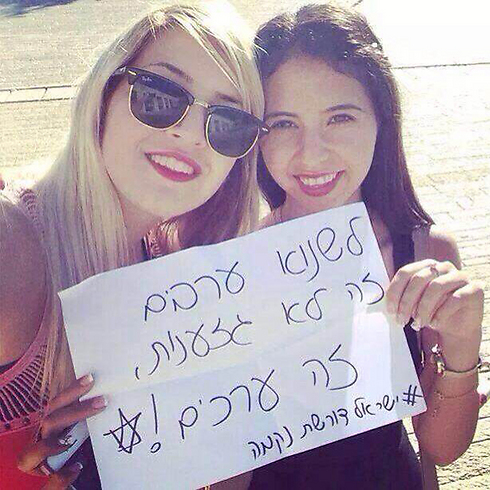 "Hating Arabs is not racism, it's a principle"

Nonetheless, the campaign calling for revenge did not go without protest, with political leaders and left-wing demonstrations calling for restraint.

Opposition leader and Labor Chairman Isaac Herzog spoke at a Wednesday evening protest in Jerusalem against the violent calls for revenge which emerged in the wake of the discovery of the missing boys' bodies. "Israel will not allow the extremists to rule the day, not on our side and not on the Palestinian side." 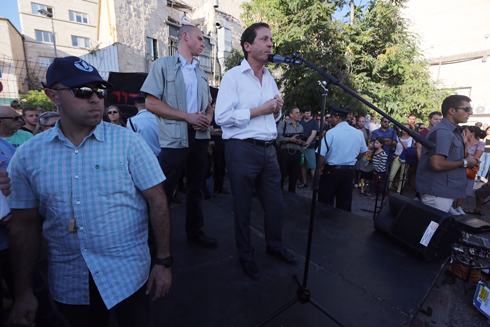 Herzog addressed the murder of a Palestinian teen earlier in the day: "If this was motivated by nationalism it is absolutely an act of terror. I trust the police and the security forces to find the murderers and bring them to justice."

Some 1,000 people demonstrated in the city center against the rightwing calls for revenge against the Arab population. "The sights we witnessed yesterday in Jerusalem were not done in our names and do not represent our ways," said Meretz MK Nitzan Horowitz. 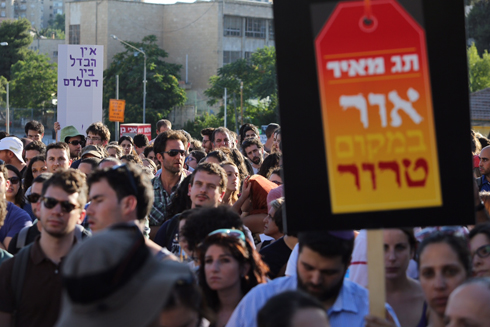 The demonstration was a response to the murder of Palestinian youth Muhammad Abu Khdeir. Members of Knesset, rabbis, public figures, and members of the city's pluralistic movements attended the protest.

Despite the efforts of the demonstration's organizers, not a single widely-recognized right-wing figure arrived to support the protest. 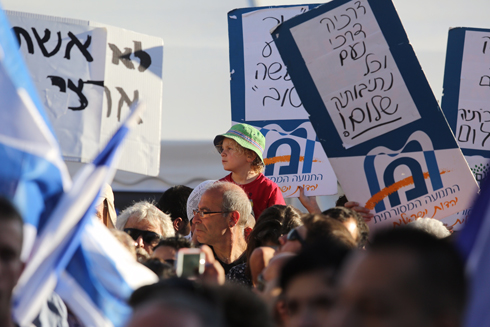 Herzog emphasized the importance of moderation in this difficult time: "Jews and Arabs will have to live side-by-side in this country forever, and we must work together to curb any attempt to harm the delicate fabric of our relations.

"The extremists on both sides are trying to drag all of us into a circle of blood, but most of the Jewish and Arab society disapproves of them and want to live in peace," said Herzog.

Former Ambassador to the United States also slammed recent calls for revenge for the murder of three Israeli teens: "As deeply as we mourn the murders of Eyal Yifrah, Naftali Fraenkel and Gilad Shaar, we, as Israelis and Jews, must condemn the racist calls for vengeance against innocent Palestinians,"

Oren said in a statement on his Facebook page

"One of the sources of Israel’s moral strength has been our refusal to resemble our enemies in their obsession with revenge and blood. I categorically condemn all acts of violence and racism which dishonor the memory of our three precious boys”.