Four IDF soldiers from a haredi unit in the Kfir Brigade were sentenced to 10 days in jail Thursday morning, after posting images on Facebook opposing Israeli military restraint and calling for Prime Minister Benjamin Netanyahu to let them "annihilate terrorists."

There have been numerous Israeli calls for revenge since the discovery of the bodies of the kidnapped teens Gil-Ad Shaer, Naftali Frenkel and Eyal Yifrach on Monday, some using racist terms to describe Arabs. Among the voices were those of IDF soldiers on active duty, who protested the military's policy of restraint. Several posted a similar image to the four that were jailed, which read, "The battalion demands revenge." 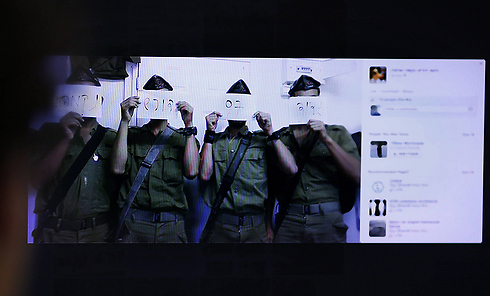 Netzah Yehuda Battalion soldiers calling for revenge (Photo: AFP)
The four soldiers jailed Thursday had posted the images via the Facebook accounts of two of them, which showed them holding a piece of paper that read, "Bibi, let us annihilate terrorists." The four were found guilty by the battalion's deputy commander of violating military discipline.

The IDF said in response that, "These soldiers were sentenced to several days in prison in light of their actions in violation of military orders. This is a serious incident that is not in line with what is expected of IDF soldiers. Each case that is brought to the commanders' attention will be treated very seriously, as was the case in question." 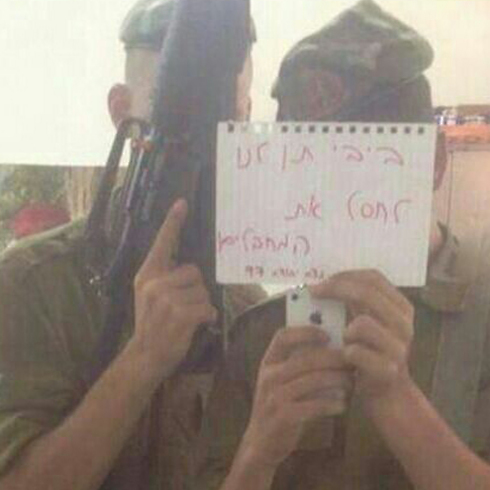 Netzah Yehuda Battalion soldiers pose with sign saying 'Bibi, let us annihilate the terrorists.'
Attorney Adi Keidar from the rightist legal aid organization Honenu (Pardoned), who represented two of the soldiers, told Ynet: "The system is trying to deal with online protests in the wrong way. The claims that the fighters have raised do not constitute an offense in anyway. These are good fighters and model soldiers. We call on the authorities to end the disciplinary proceedings against them immediately, and return them to operational duty as soon as possible. "

Honenu founder Shmuel Medad said that, "Israel sends its soldiers to the front, but does not understand their situation. The conduct seems to be that of someone who wants to look good for hostile foreign officials, some of whom are anti-Semitic and Israel-haters."