Opposition MKs urge Netanyahu not to enter Gaza and call on him to come out against calls for revenge; 'We've already seen how easily words turn into a finger on the trigger,' says Meretz leader Gal-On.

While some in the right are calling for revenge for the kidnapping and murder of Eyal Yifrach, Gil-Ad Shaer and Naftali Frenkel, hundreds of protesters gathered at HaBima Square in Tel Aviv on Thursday evening urging "No to Escalation, No to Revenge."

The protest was organized by Peace Now and opposition parties. Among the signs at the demonstration were: "A diplomatic agreement - a death blow to terror," and "Yes to Talks, No to Escalation." 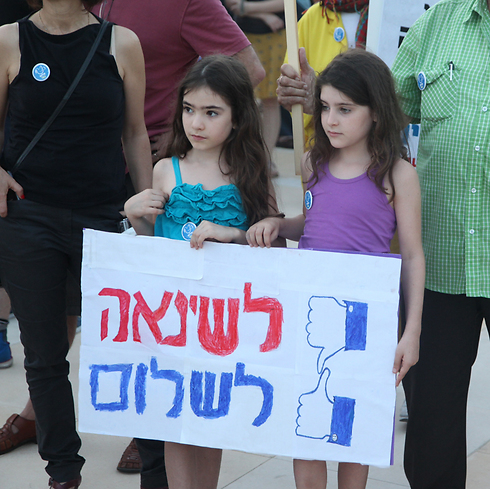 Protesters in Tel Aviv demand: No to hate, yes to peace (Photo: Motti Kimchi)
When Meretz leader Zehava Gal-On took the stage to speak, a right-wing activist called out "aren't you ashamed of yourself?" Gal-On replied: "This is the result of violence and wild incitement." She called on Prime Minister Benjamin Netanyahu not to enter Gaza. "Don't take the 'what doesn't work with strength, will work with more strength' road - it didn't work and won't work. Collective punishments, bombing and shattering Gaza won't stop the rockets and won't bring calm to the southern communities."

Gal-On also spoke of the calls for revenge that are gaining traction on social media: "They are bolstered by tail wind from the government's ministers and right-wing MKs. People like Lieberman, Bennett and Ayelet Shaked. It is time, Mr. Prime Minister, that you step off your high horse and stop being a mere observer, because we've already seen how easily words turn into a finger on the trigger." 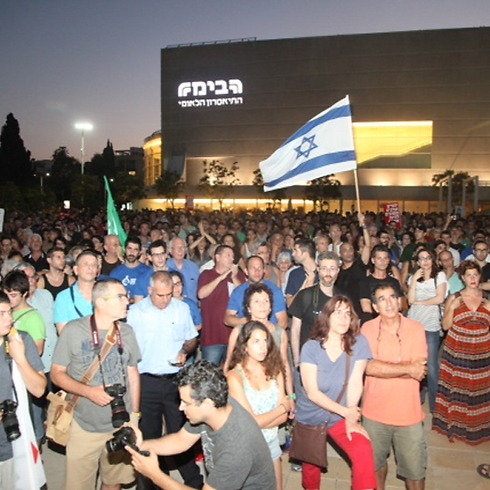 Thousands arrive at Tel Aviv's Habima Square to protest recent escalation, calls for revenge on Palestinians (Photo: Motti Kimchi)
Labor MK Eitan Cabel called to stop the hate before it is too late. "In one of the Facebook posts there is a picture of two teenage girls smiling with a sign that says 'hating Arabs is not racism, it is values.' I was shocked when I saw thousands of likes under that photo," he said.

"This hate is the opposite of what our people represent, and the opposite of the legacy of love and acceptance. We must stop. We have a prime minister that, precisely at this hour, chose not to speak. I demand Netanyahu to call a press conference and condemn this phenomenon. To commit to doing whatever it takes to completely exterminate this ugly and dangerous trend before the light onto the nations gets turned off," Cabel went on to say. 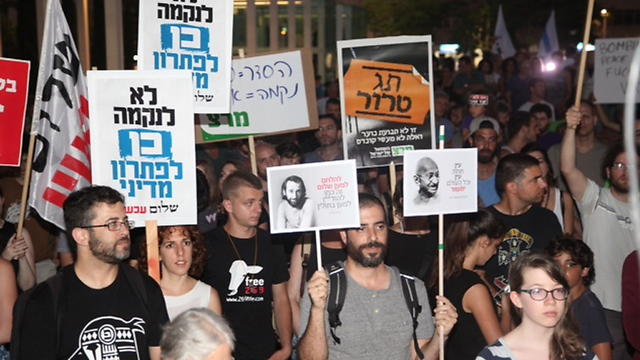 Left wing protest: No to revenge, yes to a diplomatic solution (Photo: Motti Kimchi)
On Wednesday, a thousand people protested in Jerusalem calling for "grief, not revenge." The protesters came out against a demand from the right to avenge the three slain Israeli teens. In a rally held following the murder of a Palestinian teen, Opposition Chairman Isaac Herzog (Labor) said that "Israel will not let extremists dictate our agenda, not extremists from our side and not from the Palestinian side."