Building in Sderot hit by rocket

Breaking with past policy, IDF chose not to respond overnight to ongoing rocket attacks, citing desire to calm mounting tensions.

Two rockets hit Israel early Friday morning joining a violent week on Israel's southern front. However, breaking with past policy, the IDF or air force has yet to respond to the rocket fire.

After rocket attacks on Israel, the IAF usually responds by targeting rocket launcher cells or terror infrastructure in Gaza Strip. However, in line with the message sent indirectly by Prime Minister Benjamin Netanyahu and government officials to Hamas Wednesday, according to which calm will be met with calm, the military has refrained from responding.

The two rockets fell at roughly 5:30 am Friday and came after Wednesday saw close to 50 rockets hit Israel's southern communities, roughly four of which hit homes in the southern town of Sderot. The two projectiles fell in open areas near Sderot, while Iron Dome intercepted another rocket which was aimed at the rocket-battered city. IDF forces created a smoke screen in the northern Gaza Strip in a bid to hinder rocket launchers ability to aim their missiles. 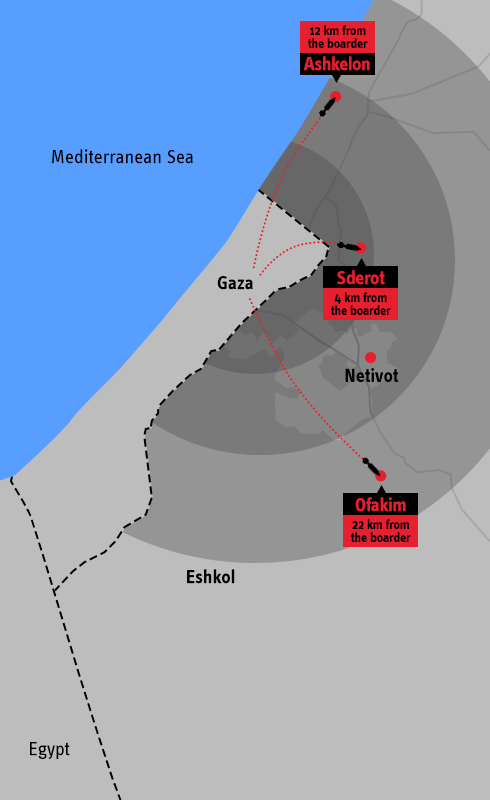 Map of Gaza rockets' range
About 125 rockets were fired from the Gaza Strip at southern Israel over the past month, 45 of which in the last 24 hours.

Government officials said on Thursday that Israel sent messages to Hamas through different channels, warning the organization that if the situation in Gaza escalates, the IDF will severely hit Hamas and launch a significant operation in the Strip.

Despite that, the message also said that just like in previous rounds of violence, Israel would respond to calm with calm.

Shortly before midnight, after a two-hour break in rocket fire, it renewed again. A Code Red siren was sounded in the Sdot Negev and Sha'ar HaNegev Regional Councils, and a rocket fell in an open area.

Before that, 15 rockets and mortar shells were fired within an hour, and one soldier was lightly wounded in Eshkol from shrapnel to his leg. In addition, two fires broke out in Sderot as a result of the rocket fire, and light damage was caused to buildings from rockets that fell in Sdot Negev.

The cabinet met to discuss the escalation in recent days - that include both rockets from Gaza and violent clashes in East Jerusalem. The cabinet discussed the risks a widespread operation in Gaza poses, among them rocket fire at Tel Aviv.

A government source said that "Israel is still in the stage of studying the situation, but it's still unclear whether the messages passed on to Hamas have been received and understood."

Prime Minister Benjamin Netanyahu said Thursday night that if "firing toward our residents in the south continues, then our bolstered forces there will act forcefully".

Due to the continuous mortar fire, Eshkol residents were instructed to enter their safe rooms and shelters. In Sdot Negev, however, there were no special instructions and activities will continue as normal.