Hamas video: It's a new dawn, all cities are close to Gaza

Former intelligence chief Yadlin: There is Israeli deterrence in Gaza. Hamas could fire hundreds of rockets at Tel Aviv and Beersheba, but it doesn't.

It has become a ritual. Every time tensions rise in the south of Israel and calls for a major IDF operation in the Gaza Strip arise, Hamas' military wing launches a psychological attack in an attempt to create panic among the Israeli public. The messages are transmitted via a short video in Hebrew (at times, broken Hebrew) and usually include images of rockets front and center. It seems that this tradition is here to stay and a new video clip was released Saturday.

In the video, released by the Izz ad-Din al-Qassam Brigades, a member of the organization is seen doing welding work on a Grad rocket inside a lathe. In the background, particularly dramatic music plays. When he finishes preparing the rocket, the caption "New Dawn" appears in red. 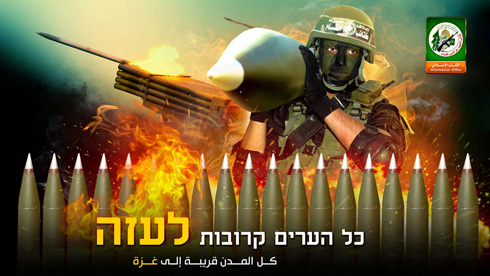 'All cities are close to Gaza'

The military wing also published on its website and on social media a photo of a Hamas member carrying a rocket on his shoulders and in the background a rocket launcher is seen with the caption "all cities are close to Gaza," reminding of Hamas' threat to add other cities to the rockets' range.

Former Military Intelligence head Maj.-Gen. (res) Amos Yadlin said Saturday morning that "it is not true that there isn't Israeli deterrence in Gaza. Hamas could fire hundreds of rockets at Tel Aviv and Beersheba, but it doesn't. So, the deterrence exists, but it's not absolute. I have no doubt we are facing another round of hostilities against Hamas and we need to make sure it's done under optimal conditions for Israel".