23 Palestinians killed and over a 100 wounded in first day of Operation Protective Edge; Hamas leader responsible for Shalit kidnapping targeted, but not killed.

Hafez Hamed, a commander in the armed wing of Islamic Jihad, al-Quds Brigades, was killed in an IAF attack in Beit Hanoun on Tuesday night, along with five members of his family.

The IDF also reportedly launched a missile at the home of Hamas military wing chief Raed al-Atar in Rafah in the southern Gaza Strip, who was among those responsible for the abduction of Gilad Shalit. However, there were no casualties in the attack.

The IDF attacked over 270 terror targets in the Gaza Strip since the beginning of Operation Protective Edge, most of them from the sea, IDF Spokesman Brig.-Gen. Moti Almoz said Tuesday evening.

The army also deployed Artillery Corps troops along the Gaza border, and some 40,000 reservists were called up for the Central and Southern Commands.

According to Palestinian reports, at least 23 people were killed and over 100 wounded so far on Tuesday.

Seven Palestinians, among them two children under the age of five, were killed and about 25 wounded in an IAF attack on Tuesday on a house in the Gaza Strip, Gaza media and the Palestinian Interior Ministry said.

Local residents said the home in Khan Yunis in the northern strip belonged to the Kawara family, at least one of which was a Hamas member, and that the casualties occurred when it came under attack for the second time on Tuesday.

After the first strike, people had gathered on its roof as "human shields", hoping their presence would deter a second strike, the residents said. Hamas has already called the attack a "crime against humanity" and dubbed it the "massacre of Khan Yunis."

An initial IDF investigation into the deaths in Khas Younis found that troops have alerted the family of the imminent strike instructed them to evacuate the building.

The homes were hit using what the IDF call the 'Knock on the roof' procedure, in which forces fire a small mortar at the target to indicate the imminent attack and signal those inside to flee before hitting it with full forces. 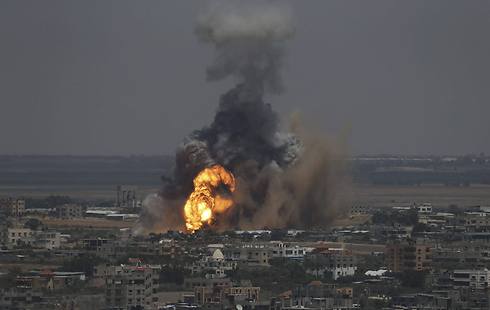 Arab sources reported that three people have been killed after IAF aircraft attacked a vehicle in the center of the Gaza Strip, earlier Tuesday as rockets were fired at Israel.

Earlier Tuesday it was reported one person died in an IAF airstrike in Gaza, Hamas-affiliated media and Gaza medical sources said. The man reportedly died in an attack on Deir al-Balach, in central Gaza, he was the first Palestinian killed since Operation Protective Edge began Monday night. 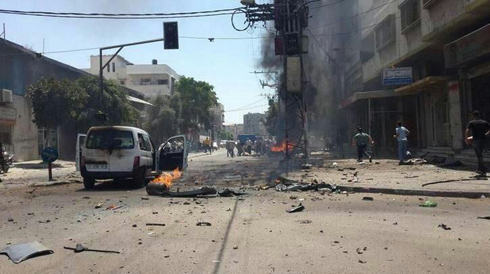 Scene of attack which left at least 3 dead

Later in the day an IAF attack on Jabaliya, a refugee camp in central Gaza Strip, saw at least three people die after the car they were traveling in was attacked. According to Arab sources, one of those killed was the commander of Hamas' elite navy unit. 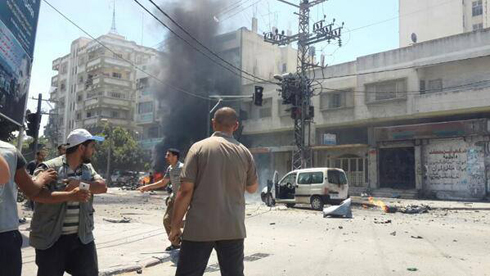 The news came as the Cabinet voted to begin calling reservists forces, and the IDF began preparing for a massive Gaza operation. Prime Minister Netanyahu told the IDF to make ready for a "long and forceful" operation. 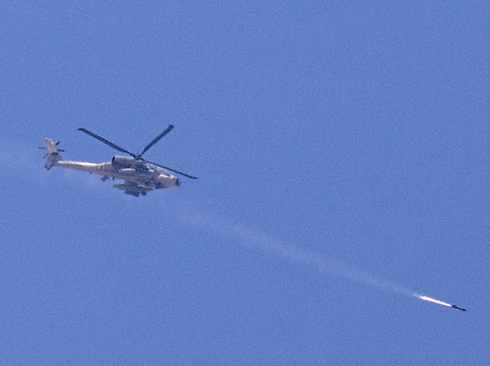 IAF aircrafts in cooperation with the Shin Bet attacked Tuesday the house of senior Hamas member in Rafah. The house was being used by the organization. There were no injuries, Palestinian sources reported. Overnight Monday, the IDF hit at least 50 terror targets, among them some four houses belonging to Hamas officials. The IAF has launched no less than 40 air attacks at Gaza since the morning hours. 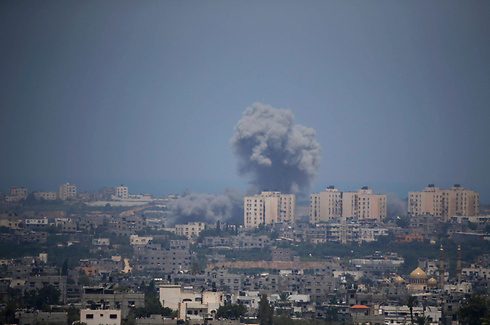 " Abbas demanded Israel immediately stop its escalation and the raids on Gaza," said a statement from his office published shortly after midnight by the official WAFA news agency.

Netanyahu ordered the military to "take off the gloves" in its confrontation with Hamas and said "Hamas chose escalation and it will pay a heavy price for it."

Senior political sources close to Prime Minister Benjamin Netanyahu said he has ordered the defense establishment to conduct a "continuous, long and forceful operation in Gaza."

According to the source, Netanyahu told the IDF to go "all the way," saying "evening a ground operation was currently on the table." According to them, such an operation was far from certain, but that the operation's goal was to increase deterrence and deal Hamas a significant blow.