Despite ongoing rocket fire at Israel from Gaza Strip, some 200 trucks of goods including food and basic products passed into Gaza from Israel's Kerem Shalom crossing with Gaza, the IDF said.

Meanwhile, the Egyptian government opened the Rafah border crossing between Egypt and Gaza Strip in order to allow the evacuation of wounded Palestinians. Cairo is allowing Egyptian citizens to leave Gaza through Rafah and head for the capital. 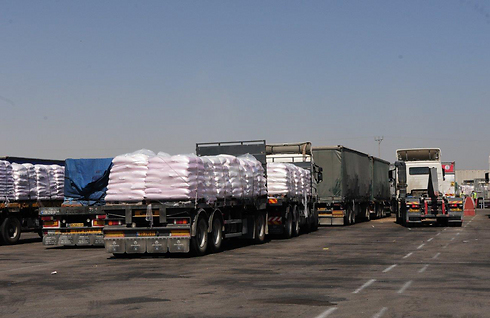 Kerem Shalom crossing (Photo: Herzl Yossef)
Despite over 300 rockets hitting Israel, Israel has allowed some 200 trucks to cross into the strip, including some 200,000 liters of fuel daily, in an attempt to prevent a humanitarian crisis in Gaza. Meanwhile, the government said that over 20 Palestinians, including eight Gazan children were treated at Haifa's Rambam Medical Center, as part of Israel's longstanding cooperation with the Palestinian Authority. Rambam Health Care Campus provides medical care to patients from Gaza and the PA annually. Currently, hospitalized Palestinians include three adults and eight children from Gaza, and three adults and two children from the West Bank.

Falah exlapined that “even in times of war we continue to receive patients and give them the care they need-children and adults.”

"On the one hand they are in Israel and see the consequences of the actions of Hamas and how people get hurt on this side of the border. On the other hand, their families in Gaza are under attack by the IDF and they fear for the lives of their loved ones," says Falah.

Rambam Health Care Campus treats hundreds of patients each year from the PA and Gaza, including 650 children and teenagers in 2013.