Hamas fired hundreds of rockets into Israel, but beyond some discomfort, they caused no casualties and little damage; meanwhile, IDF receives eighth battery for system.

Israel's "Iron Dome" defense system has emerged as a game-changer in the current round of violence with Hamas militants in the Gaza Strip, shooting down dozens of incoming rockets and being credited with preventing numerous civilian casualties.

By shooting down more than 90 percent of its targets, the system is ensuring Israel's decisive technological edge that has helped it operate virtually unhindered in Gaza.

At the same time, it's also providing a much-needed sense of security on the home front.

Gaza militants have fired hundreds of rockets into Israel, some more than 100 kilometers (60 miles) deep, covering an area of about 5 million. But beyond some jitters and discomfort, they haven't hurt Israelis much, causing no casualties and very little damage.

"The Iron Dome system and its impressive success thus far have had a strategic impact on managing the campaign. It gives us wide options," said Defense Minister Moshe Ya'alon. "Having said that, we cannot become complacent."

Israel has deployed seven batteries across the country that – coupled with a high-tech warning system – have given it its best defensive capabilities ever.

Meanwhile, the installation work on the eighth Iron Dome battery was completed on Friday in record time in light of the recent escalation in the south, the Defense Ministry said in a statement, noting that the additional battery would defend wider areas against the threat of rockets from the Gaza Strip. 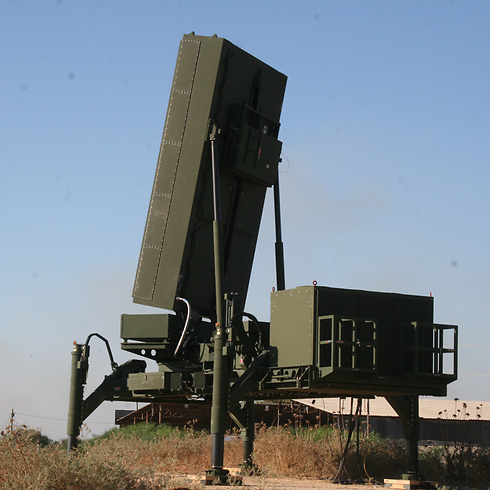 The Defense Ministry's Israel Missile Defense Organization, along with Israel’s Rafael Advanced Defence Systems has completed the preparatory work on the battery under pressure created by the sharp increase in the number of rocket attacks from the Gaza Strip towards the south.

The battery will be deployed in the next coming days in a populated territory, most likely in the northern part of the country.

Iron Dome quickly recognizes the trajectory of incoming rockets and whether they are headed for major population centers. Those are shot down, while others are allowed to fall in empty fields to spare the hefty cost of firing the sophisticated interceptors. Local reports say each launching costs about $20,000. 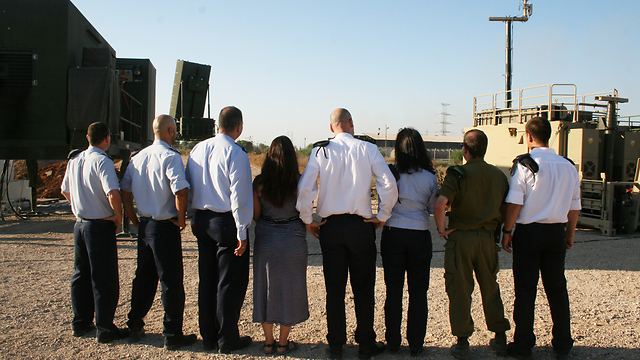 The team behind development of eighth battery (Photo: Israeli Ministry of Defense)

So far, Hamas and other Gaza militants have fired more than 420 rockets toward Israel in three days of fighting. The military says it has shot down 90 of those, including several over Tel Aviv and central Israel.

On Thursday afternoon, the system was deployed for the first time in Jerusalem. Two puffs of smoke could be seen in the sky – apparently after intercepting two incoming rockets.

Lt. Col. Levi Itach, head of the military's early warning branch, said several high-tech measures along with a disciplined public that has vigilantly followed instruction have allowed Israel to keep its casualties from rockets to a minimum.

He said the systems had improved significantly in the two years since the last major exchange of airstrikes and rocket fire between Israel and Hamas, in which six Israelis were killed and several were injured by Gaza rocket fire in that weeklong battle.

The system is still far from foolproof. On Thursday, rockets struck a home in the southern city of Beersheba and a car in Ashdod – incidents that easily could have resulted in casualties.

"If we keep up what we are doing, there is a good chance that we will be able to lower the ratio to one death for every 10,000 rockets fired," he said.

Yossi Kuperwasser, a retired military general and current director general of Israel's Ministry of Strategic Affairs, said that Gaza's Hamas rulers and other militants have acquired longer, more powerful weapons in the past two years, but Israel had not been idle either. He said improvements to Iron Dome have allowed it to hold off on a ground operation while the home front was protected.

"It gives us much more room to maneuver. ... Now we have the ability to hold our breath for some time," he said. "And I'm sure that Hamas is feeling frustrated with this situation because after launching hundreds of rockets, they haven't managed to get Israeli casualties."

Newspapers have already crowned the US-funded system as the star of the campaign. The front page of Yediot Ahronot carried the headline "Golden Dome," with a huge spread of the system in action. The paper's top military columnist, Alex Fishman, wrote that the Iron Dome has "changed the face of the battle."

Iron Dome is just the first of a planned three-part defense system that Israel hopes will be operational by the end of the year.

It has successfully tested "Magic Wand," designed to intercept projectiles with ranges between 70 kilometers (45 miles) and 300 kilometers (180 miles), and is aimed primarily at countering the large arsenal of Hezbollah rockets in Lebanon and those of President Bashar Assad's government in Syria.

Together with the Arrow system for longer-range threats from Iran, the three components will complete what Israel calls its "multilayer missile defense."

The next generation of the Arrow, now in the development stage, is set to be deployed in 2016. Called Arrow 3, it is designed to intercept missiles at very high altitudes, before they are on their downward path toward their target. Together, the two Arrow systems would provide two chances to strike down incoming missiles.

Just this week, President Barack Obama cited the systems as proof of the US commitment to Israel's security.

"Across the board, our unprecedented security cooperation is making Israel safer and American investments in Israel's cutting-edge defense systems like the Arrow interceptor system and Iron Dome are saving lives," he wrote.