Palestinians looking through the rubble of a destroyed structure in Rafah.
Photo: AFP

The Israel Air Force targeted a meeting of senior terrorists in the Gaza Strip, the IDF said Friday night, after a day of Israeli air strikes in Gaza and Gazan rockets on Israel.

The IAF also twice struck rocket launchers in the Gaza Strip on Friday, shortly after they were used to fire barrages on central Israel.

Prime Minister Benjamin Netanyahu vowed Friday evening that the IDF's Operation Protective Edge would not halt until the rocket fire on Israel from Gaza ceased and quiet was restored.

Earlier Friday, two Palestinians were killed in an IAF strike on the central Strip, bringing the death toll in the fourth day of the IDF operation to 100, Palestinian medics said. Some 670 have been wounded in the offensive so far, according to the Gaza Health Ministry.

Health Ministry spokesman Ashraf al-Qudra said two men were travelling in a municipality car in the Bureij area with a third man, who was seriously wounded in the strike. Earlier Friday, four people were killed in pre-dawn attacks, Palestinian medical officials said. The IDF said fresh naval and air strikes were launched early, but a spokeswoman gave no further details.

Israel says it has struck more than 1,100 targets in Gaza, including militant commanders' homes, which it described as command and control centres. Palestinian officials put the number of dwellings destroyed or damaged at more than 120. Residents said some of the houses did not belong to fighters.

Owners of some of the targeted homes received telephoned warnings from Israel to get out. In other cases, so-called "knock-on-the-roof" missiles, which do not carry explosive warheads, were first fired as a signal to evacuate.

An air strike on a house in Gaza City killed a man described by officials as a doctor and pharmacist. Medics and residents said an IAF aircraft bombed a three-story house in the southern town of Rafah, killing three people.

The Palestinians said IDF tanks fired shells east of Rafah, naval forces sent shells into a security compound in Gaza City and aircraft bombed positions near the borders with Egypt and Israel. 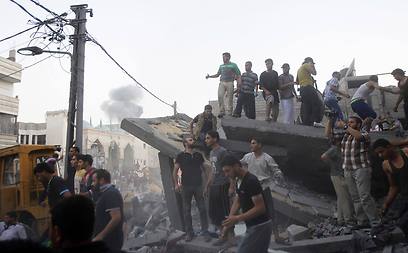 Palestinians looking through rubble of structured bombed by IDF in Rafah (Photo: AFP)
Medical officials in Gaza said at least 60 civilians, including a four-year-old girl and a boy of five killed on Thursday, were among the Palestinians who have died since the offensive began on Tuesday. Twenty-two of them were under the age of 18.

Residents said in Friday's attack in Rafah no warning was issued and the victims were asleep when their house was bombed.