Arab media lashes out at Hamas, calls it ‘guilty of massacre’

Egyptian broadcaster and Saudi newspaper blame Hamas for latest conflict with Israel, while some stick to criticizing Israel.

Like their Israeli counterparts, Arab media outlets have been extensively covering the IDF's Operation Protective Edge. They have also conducted countless interviews with analysts, delivered breaking news and published various international condemnations. Unlike the Israeli media, however, the finger of blame is of course firmly pointed at Israel, while the Palestinian people are painted solely as victims.

But during this operation it has become evident that alongside the standard criticism of Israel, Hamas, which has in recent years lost face among the Arab public, has also been taking quite a bit of fire.

An example of this can be found in the Saudi newspaper “Al Watan”, which published an editorial on Friday that slammed not only Israel, but Hamas as well.

Beginning with its criticism of Israel, the article wrote: “Israel claims that it accurately hits targets, while the cameras show that among the victims there are innocent Palestinian families who have no knowledge of the conflict, which renders the Israeli response against what it calls ‘terrorism’ as a greater type of terrorism. 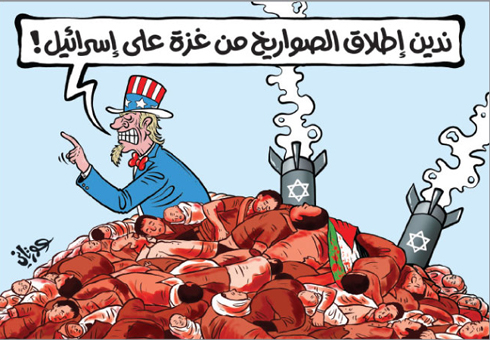 "Americans condemn rocket fire toward Israel while sitting on a pile of bodies". Cartoon from Jordanian newspaper Ad-Dustour

The criticism of Hamas appears later on: “The world does not deal with Palestinians in Gaza and international organizations do not do them justice because Hamas has a bad relationship with the world, and no matter how right the issue is, there needs to be a leadership that can make contact with the world for support.” 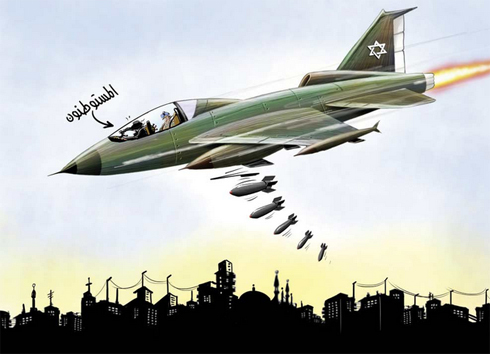 The article further explained that among other things, “Hamas’s isolation, its diplomatic impotence, its disconnection from the Authority and rebellion against anyone who is a legitimate representative of the Palestinian people makes it appear as a criminal in the eyes of the rest of the world.”

In Egypt, it was the television presenter and interviewer Amr Adeeb, known for his opposition to the Muslim Brotherhood, who took heat for his support for Hamas.

He called on Egyptian President Abdel Fattah al-Sisi to intervene for the sake of Gaza's residents, open the crossing points and provide assistance. However, considering the current atmosphere in Egypt against Hamas, which is affiliated with the commonly despised Muslim Brotherhood organization, the reactions were quick to come and Adeeb was called a Hamas member and a terrorist. 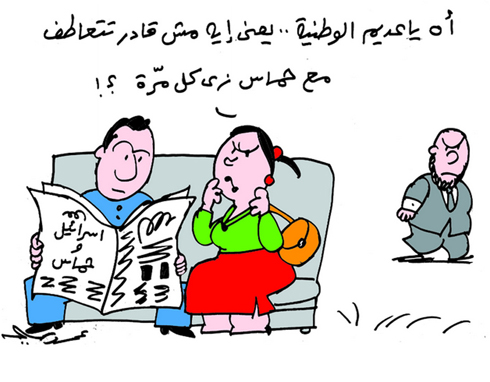 Sarcastic cartoon in Almasry Alyoum newspaper: "Why don't you sympathize with Hamas?"

Broadcaster Amani al-Hayat from ON TV, which is affiliated with the Egyptian regime, was one of those who slammed Adeeb. She claimed that Hamas was to blame for Israel’s “massacre” in the Gaza Strip and said that Hamas deliberately created the crisis in Gaza so that the Rafah crossing would be opened. 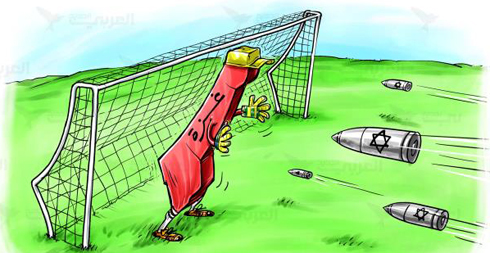 "Israel bombing Gaza at the goalpost." Cartoon from the "Alaraby" news website

Even so, there are those in Egypt who still maintain a militant policy against Israel. The Egyptian newspaper “Al-Jamahiriya”, affiliated with al-Sisi government. which, according to reports is trying to broker a ceasefire between Israel and Hamas, tried to maintain a strongly militant attitude against Israel. 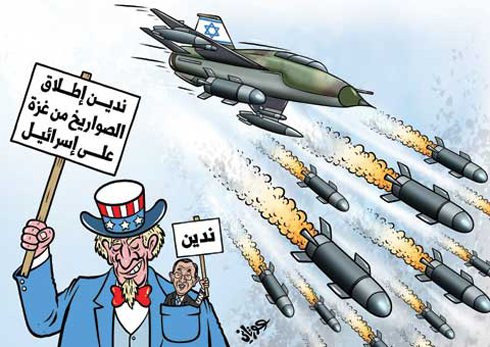 The United Nations and United States condemn Israel while it bombs Gaza. From the Saudi "Al Watan"

In one of its editorials, the paper wrote that “the murder of children, women, elders and the helpless people in Gaza with the use of deadly weapons from the sea, air and land are crimes against humanity committed by those who tire the world with talk about the Nazi Holocaust.”

The harsh article also claimed that the murder of Mohammed Abu Khdeir in Jerusalem put even the Nazis to shame. and that the “racist” Israeli government was no different to those who killed and burned his body.

At the same time, there is a widespread assumption in the Arab press that Israel was taking advantage of the situation in the Arab world and the lack of interest in the Palestinian issue to carry out its actions in Gaza.

In an article entitled “Gaza between ISIS and Netanyahu”, “Al-Hayat” newspaper wrote Friday morning that “it was expected that the new Israel foray against the Gaza Strip would benefit from the waves of violence that have spread into the area.” 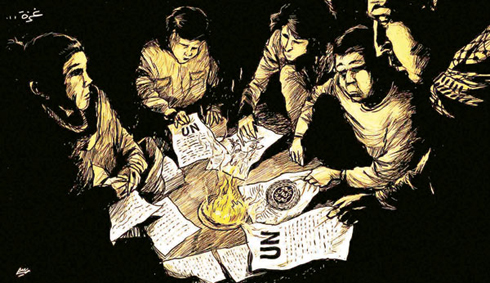 "Sitting in Gaza and burning UN documents", as featured in the Asharq Al-Awsat newspaper

There are also those who take advantage of the Gaza operation in order to turn the spotlight on issues happening in their own area, such as the Syrian regime's media and Hezbollah. They have been reporting regularly about the current situation, especially from the viewpoint of the Palestinians in general, and not Hamas.

“Palestine is alone: who will take the masks off the faces of the hypocrites?”, an opinion piece in the Syrian Al Watan newspaper wrote. The article attempted to attack the Arab world and the clerics that were affiliated with the Syrian rebels for not speaking out against the current happenings in Gaza.