Four Palestinian children were killed on Wednesday afternoon on a Gaza beach by a shell fired by an Israeli naval gunboat, Palestinian medical officials said, according to Reuters.

Asked about the incident, an Israeli military spokesman in Tel Aviv said he was checking the report.

"When the first shell hit the land, they ran away but another shell hit them all," said Abu Hassera, whose shirt was stained with blood.

"It looked as if the shells were chasing them," he told Reuters.

Ashraf al-Qidra, spokesman for the Gaza Health Ministry, said four of the youngsters were killed and a fifth youth was in critical condition. "This is a cowardly crime," he said.

The Gaza beach area has been shelled frequently since Israel began its offensive in the enclave on July 8 following a surge in Palestinian cross-border rocket strikes.

The IDF has been striking targets in Gaza City, Beit Lahia, Khan Younis on Wednesday since the early morning hours.

Palestinian emergency services reported at least eleven people were killed in IAF strikes since, bringing the death toll in the operation to 208 dead, with almost 1,500 wounded so far.

Palestinians reported at least three people were killed in a strike on a car in Khan Younis. The IDF confirmed the strike, saying terrorists were traveling in the vehicle. A man, that was probably the strike's target, was killed, along with a 10-year-old boy and an elderly woman. 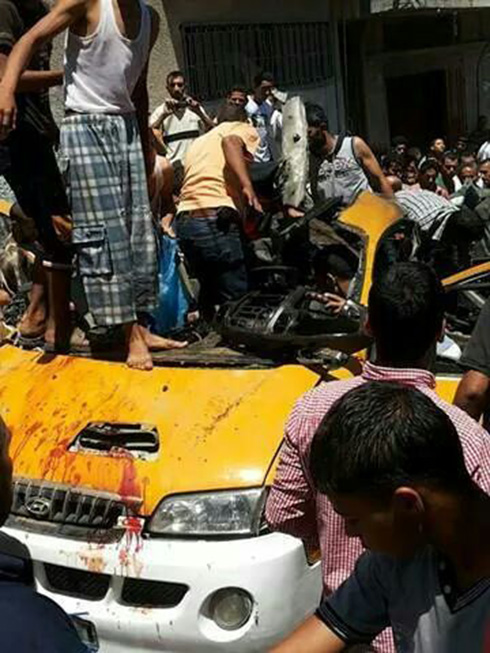 The car that was targeted in Khan Younis.

Overnight, the IAF hit 39 terror targets, among them 30 houses - including the homes of four senior Hamas officials - and eight rocket launchers.

IAF planes bombed the home of Hamas co-founder Mahmoud al-Zahar in the Tel al-Hawa neighborhood in Gaza City. The home was completely destroyed and two people were wounded in the strike. Al-Zahar, who was a key figure in Hamas' violent takeover of Gaza in 2007, was reportedly not in the house and was hiding elsewhere. 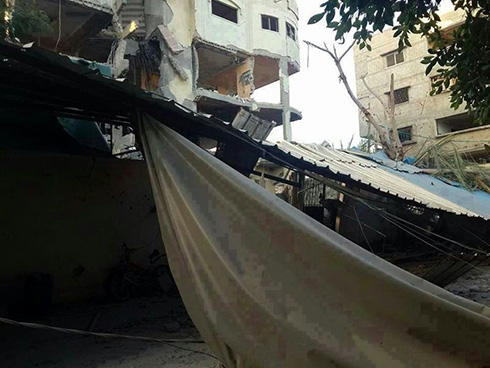 Home of Hamas co-founder Mahmoud al-Zahar after being hit in IAF strike. 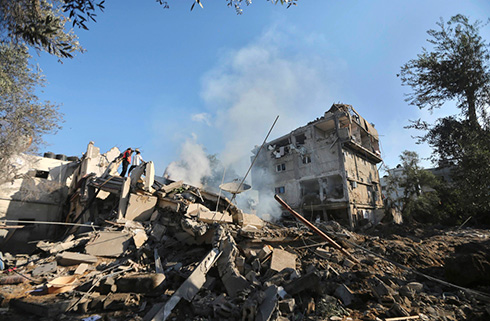 Nearly four hours have passed since the 8am ultimatum the IDF gave residents in the northern and eastern parts Gaza City to evacuate their homes ahead of a planned strike, but residents from the Shuja'iyya and Zaytoun neighborhoods have yet to heed the army's warnings.

Meanwhile, the IDF's strikes in the Gaza Strip remain fairly tame, with only 39 terror targets struck overnight - including homes of Hamas officials - and some rocket launchers in Beit Lahia struck Wednesday morning. The objective of these strikes is, among other things, to encourage the civilian population to evacuate. 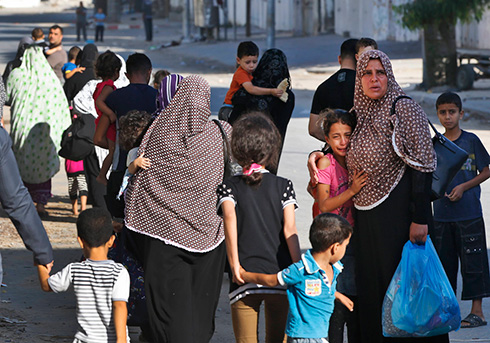 Shuja'iyya and Zaytoun are in the eastern outskirts of Gaza City. There are some 100,000 people in Beit Lahia and Beit Hanoun in the northern Gaza Strip, but only some 20,000 of the civilians living there left their homes. The rest remained.

There are three possible reasons for this: The first - the Gazans don't believe that the IAF will deliver a massive pounding to the area; the second - the residents believe the IDF will not attack civilian targets; the third - Hamas is putting extreme pressure on civilians not to evacuate, and they heed Hamas' calls out of fear. Hamas has been sending threatening messages to the population in recent hours, saying that they will take their revenge on those who evacuate. 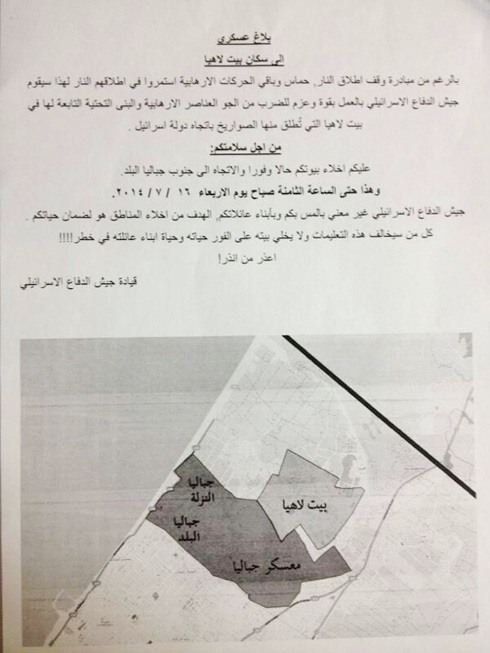 The IDF dropped leaflets over Shuja'iyya, Zaytoun and Beit Lahia and called residents warning them to leave the area on Tuesday night and Wednesday morning.

"Despite the cease fire, Hamas and other terror organizations continued firing, so the IDF intends to strike terror targets and terrorists in the area with force from the air," the leaflets said. "Rockets fired at the state of Israel are launched from these areas. For your own safety, you are asked to leave your residences immediately and travel towards Gaza City by Wednesday, 16.07.14, at 8am."

The leaflets went on to say: "The IDF has no desire to hurt you and your families. Evacuating the area is done in order to save your lives. You must not return to the area until further notice. Those who fail to comply with these instructions and evacuate immediately are risking their lives and the lives of his families."

The Hamas Interior Ministry posted a message on its website telling people not to heed the Israeli messages and dismissed them as psychological warfare.

"We urge residents to contact the Interior Ministry's free hotline if needed. The occupation has failed in its psychological warfare against our people in the past eight days, and will fail again due to the strong stand."

Two days ago, some 18,000 Palestinians evacuated their homes in the Beit Lahia area, heeding warnings from the IDF. But the strike did not take place, nor did the ground offensive that was supposed to follow.

During the night, the IAF struck a rocket launching pit close to the Wafa Rehabilitation Center in Shijaiyah, which cares for 15 disabled and elderly patients, received several calls demanding the patients evacuate, said its director, Basman Ashi.

He said an Israel shell hit near the building, causing damage to the second floor, but no injuries. Ashi said he won't evacuate because his elderly patients have nowhere to go.

Hamas also instructed the director not to evacuate the hospital, and called on people to enter the facility in order to serve as human shields that would force the IDF to call off the strike.

Four foreign volunteers - from England, the US, France and Sweden - have set up camp at the rehabilitation center to deter the military from targeting it.

English volunteer Rina Andolini, 32, said the patients range in age from 12 to over 70 and none can walk or move without assistance. She said there are also 17 Palestinian staff members. Andolini said the patients are living in a constant state of fear, intensified by the Israeli tank shelling from across the border.

When asked about the situation at the rehabilitation center, the IDF Spokesman's Office said its residents "have been asked repeatedly to leave."

"There is a rocket launching site in the area," the military said, adding that Gaza militants use the center to hide "behind civilians."