Kiev accuses pro-Russian militants of shooting down the Boeing 777 with a heavy, Soviet-era ground-to-air missile.

GRABOVO - A Malaysian airliner was brought down over eastern Ukraine on Thursday, killing all 295 people aboard and sharply raising stakes in a conflict between Kiev and pro-Moscow rebels in which Russia and the West back opposing sides. Ukraine accused "terrorists" - militants fighting to unite eastern Ukraine with Russia - of shooting down the Malaysia Airlines Boeing 777 with a heavy, Soviet-era ground-to-air missile as it flew from Amsterdam to Kuala Lumpur. Leaders of rebels in the Donetsk People's Republic denied any involvement, although around the same time their military commander said his forces had downed a much smaller Ukrainian transport plane - their third such kill this week.

Reuters journalists saw burning and charred wreckage bearing the red and blue Malaysia insignia and dozens of bodies strewn in fields near the village of Grabovo, 40 km (25 miles) from the Russian border near the rebel-held regional capital of Donetsk. 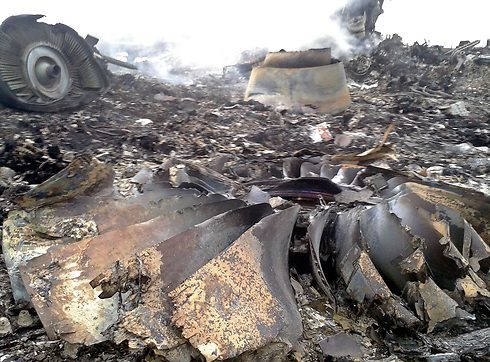 The charred remains of the plane (Photo: Reuters)
The scale of the disaster affecting scores of foreigners could prove a turning point for international pressure to resolve a crisis that has claimed hundreds of lives in Ukraine since pro-Western protests toppled the Moscow-backed president in Kiev in February and Russia annexed Crimea a month later. As word came in of what Ukraine's Western-backed president called a "terrorist attack", the Russian and US leaders, Vladimir Putin and Barack Obama, were discussing a new round of economic sanctions that Washington and its EU partners imposed on Moscow on Wednesday to try to force Putin to do more to curb the revolt against the Western-backed government in Kiev. They noted the early reports during their telephone call, the White House said, adding that Obama warned of further sanctions if Moscow did not change course in Ukraine.

Malaysia Airlines said air traffic controllers lost contact with flight MH-17 at 2:15pm GMT as it flew over eastern Ukraine towards the Russian border, bound for Asia with 280 passengers and 15 crew aboard. Flight tracking data indicated it was at its cruising altitude of 33,000 feet when it disappeared. "I was working in the field on my tractor when I heard the sound of a plane and then a bang," one local man at Grabovo told Reuters. "Then I saw the plane hit the ground and break in two. There was thick black smoke."

An emergency worker said at least 100 bodies had been found so far and that debris was spread over 15 km (9 miles). Workers were scouring the area for the black box flight recorders. 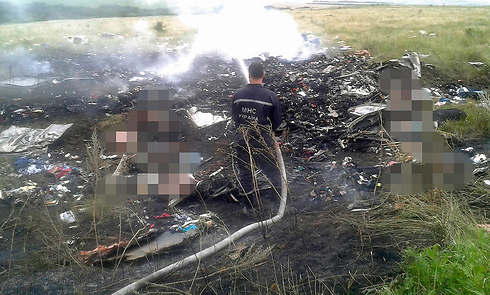 Setting out fire caused by crashed plane (Photo: Reuters)
"MH-17 is not an incident or catastrophe, it is a terrorist attack," Ukrainian President Petro Poroshenko tweeted. He has stepped up his military campaign against the rebels since a ceasefire late last month failed to produce any negotiations.

Russia, which Western powers accuse of trying to destabilize Ukraine to maintain influence over its old Soviet empire, has accused Kiev's leaders of mounting a fascist coup. It says it is holding troops in readiness to protect Russian-speakers in the east - the same rationale it used for taking over Crimea. 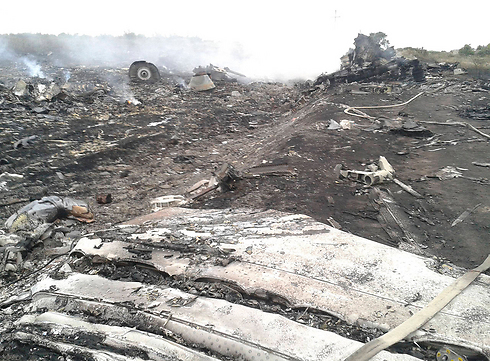 Charred remains of the Malaysia Airlines plane (Photo: Reuters)
Ukrainian Interior Ministry official Anton Gerashchenko said on Facebook: "Just now, over Torez, terrorists using a Buk anti-aircraft system kindly given to them by Putin have shot down a civilian airliner flying from Amsterdam to Kuala Lumpur." "There is no limit to the cynicism of Putin and his terrorists!" he wrote on the social media site. "Europe, USA, Canada, the civilised world, open your eyes! Help us in any way you can! This is a war of good against evil!"

A rebel leader said Ukrainian forces shot the airliner down and that rebel forces did not have weaponry capable of hitting a plane flying 10 km (six miles) up. Ukrainian officials said their military was not involved in the incident. The military commander of the rebels, a Russian named Igor Strelkov, had written on his social media page at 1:37pm GMT, half an hour before the last reported contact with MH-17, that his forces had brought down an Antonov An-26 in the same area. It is a turboprop transport plane of a type used by Ukraine's forces. There was no comment on that from the Ukrainian military. Several Ukrainian planes and helicopters have been shot down in four months of fighting in the area. Ukraine had said an An-26 was shot down on Monday and one of its Sukhoi Su-25 fighters was downed on Wednesday by an air-to-air missile - Kiev's strongest accusation yet of direct Russian involvement, since the rebels do not appear to have access to aircraft.

Moscow has denied its forces are involved in any way. 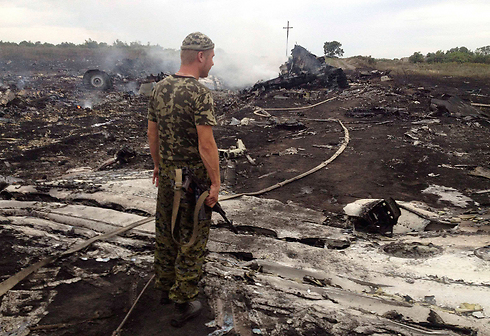 Photo: Reuters
The loss of MH-17 is the second disaster for Malaysia Airlines this year, following the mysterious loss of flight MH-370. It disappeared in March with 239 passengers and crew on board on its way from Kuala Lumpur to Beijing. In 2001, Ukraine admitted its military was probably responsible for shooting down a Russian airliner that crashed into the Black Sea, killing all 78 people on board. A senior Ukrainian official said it had most likely been downed by an accidental hit from an S-200 rocket fired during exercises. In 1983, a Soviet jet fighter shot down a South Korean airliner after it veered off course into Russian air space and failed to respond to attempts to make contact. All 269 passengers and crew were killed. In 1988, the US warship Vincennes shot down an Iranian airliner over the Gulf, killing all 290 passengers and crew, in what the United States said was an accident after crew mistook the plane for a fighter. Tehran called it a deliberate attack.