Hamas: We are not afraid of IDF ground assault in Gaza

Abbas aide: Truce talks continue; Islamic Jihad: We are prepared for all eventualities; Egypt FM: Hamas could have saved many lives by accepting our truce proposal.

Hamas issued a defiant message of support to the Palestinian public in Gaza on Thursday night, as the IDF announced the start of a ground operation in the Gaza Strip aimed at dismantling the Islamist group's military capabilities.

Israel confirmed the ground operation had begun at precisely 10:30 pm on Thursday night, marking the next stage in the 10-day operation launched with the intent of halting the ongoing heavy rocket fire on large swathes of Israel. 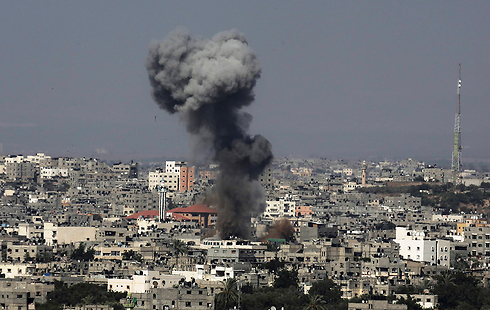 "We're with you in the field, and we aren't afraid of the ground assault." said a statement from Hamas.

The group also warned that it would not "sit with our arms crossed against Israel's stupid actions," said the group's spokesman. adding that "Israel hasn't learned the lesson from Cast Lead and Pillar of Defense." 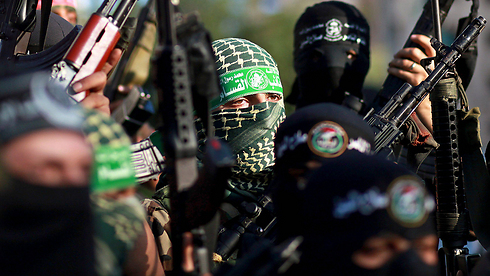 He was referring to the IDF's two previous operations aimed at quelling rocket fire on Israel from Gaza, in 2008 and 2012 respectively.

Furthermore, the spokesman said, Israel will pay a heavy price for the ground invasion. Another Hamas spokesman, Husam Badran, said that the resistance was totally prepared the IDF ground campaign, and vowed that there were signifiant surprises waiting for the enemy.

"We warn Netanyahu of the dreadful consequences of such a foolish act," Hamas official Sami Abu Zuhri told Reuters.

Islamic Jihad sounded a similar note of defiance Thursday night. "The resistance is prepared for all eventualities and the rest of the ground operation," its spokesman said.

Meanwhile, Palestinian President Mahmoud Abbas spoke with the leader of Islamic Jihad on Thrsday night about attempts to reach a ceasefire agreement.

Ziyad al-Nakhalah, the deputy head of Islamic Jihad, told Lebanese television al-Mayadeen from Cairo that the ceasefire talks in which he is participating had yet to show signs of progress.

"So far, we are still treading water and are in the initial stages. I cannot say that there are yet any signs of a serious agreement," he said. "We demand that the ceasefire is undertaken simultaneously with the lifting of the blockade (on Gaza), and we are trying to revise the Egyptian initiative."

Abbas spokesman Nabil Abu Rudeineh said Thursday night that the ceasefire efforts faced difficulties, but that the Palestinian president was not discouraged and the efforts were continuing.

The only way forward, Abu Rudeineh said, was to first stop the fire and then discuss the issues.

Abbas will meet Friday in Cairo with French Foreign Minister Laurent Fabius and then continue to Istanbul for a meeting with Turkish Prime Minister Reccep Tayip Erdogan as part of ceasefire efforts.

Egyptian Foreign Minister Sameh Shoukry strongly criticized Hamas on Thursday night, saying that the Islamist movement could have saved dozens of lives if it had agreed to the cease-fire proposed this earlier week by Cairo, which had been accepted by Israel.

"If Hamas had accepted the Egyptian proposal, it could save the lives of at least 40 Palestinians," said Sameh Shoukry, according to official news agency Mena.