Palestinian and Arab media report at least 3 killed, including 5-month-old baby, and over 40 wounded.

At least five Palestinians were killed and over 40 were wounded from IDF attacks in the Gaza Strip on Thursday night, Palestinian and Arab media reported.

Two Palestinian was reportedly dead 15 were wounded in artillery shelling in Beit Hanoun in the northern Gaza Strip, while an unspecific number were reportedly wounded in Beit Lahia.

Palestinian sources said 50 members of the same family, including children, were trapped inside a building in the Beit Lahia area in the northern Gaza Strip. Ten of them are said to be wounded. The Red Crescent said it cannot send ambulances to the area due to the heavy shelling.

Palestinian emergency sources said three people were killed from tank shelling in Rafah, including a 5-month-old baby.  Several people have also been reported wounded in an attack on a school east of Rafah.

More than 240 Palestinians were killed and more than 1850 wounded so far in the Gaza Strip since the beginning of Operation Protective Edge.

Sky News reported that journalists covering the operation were leaving their hotel rooms in Gaza because of the ground offensive.

The IDF launched a ground operation in the Gaza Strip on Thursday night after over 100 rockets were fired at Israel in the five hours since the humanitarian ceasefire ended at 3pm.

The Palestinians said earlier that six people had been killed in IAF airstrikes that resumed following the five-hour humanitarian pause asked by the UN.

The IAF attacked 30 terror targets across the Gaza Strip following the halt in fire, including a weapons manufacturing site, 10 hidden rocket launchers and 11 terror targets.

Three children from the same family were killed in an Israeli strike in the Sabra neighborhood of Gaza City on Thursday afternoon. Three other members of the family were wounded. 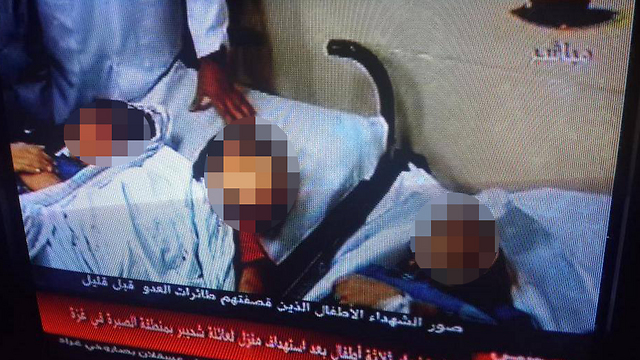 The bodies of the three children Palestinians claim were killed in IAF strike.

A four-year-old girl was killed in an IAF strike in Khan Younis.

A man was killed at a 4:35pm strike in Beit Hanoun, and four Palestinians were wounded in a strike at eastern al-Bureij refugee camp.

Before the ceasefire took effect at 10am, Israeli tank fire killed three men in their twenties in the southern city of Rafah, emergency services spokesman Ashraf al-Qudra told AFP.

The Rafah deaths came after another seven people were killed overnight.

Two men were killed in Gaza City, another two in Deir al-Balah and a fifth in northern Beit Lahiya.

One man was also killed in southern Khan Yunis and another in Rafah, Qudra said.