Police handcuffed MK Haneen Zoabi for some five minutes on Friday as she took part in protests in Haifa against the IDF's ground operation in Gaza. Police say that she was bound after attacking officers at the scene.

Zoabi denied the claims and said that police attacked her and kicked her and the commander of Hof County, Hagai Dotan ordered her released.

Hundreds of people turned up for the protest in Haifa. The participants called for attacks on Tel Aviv and blocked the main road that goes to Ben Gurion International Airport. 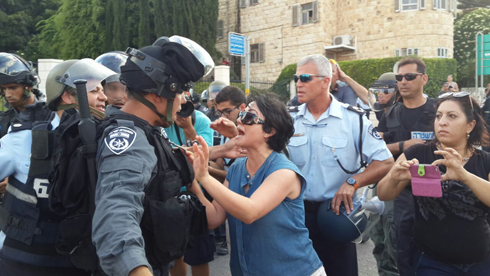 MK Zoabi faces off against riot police at a protest in Haifa. (Photo: Muhammed Shenawi)

Police arrived on the scene and clashes insued. Thirty of the protesters were arrested.

Riots also broke out in East Jerusalem Friday, namely at the Temple Mount where 12 were eventually arrested for disturbing the peace at the end of prayers. Masked youth threw rocks at police on the site and were met with crowd control measures.

Another Palestinian teen was arrested in Ras al-Amud in Jerusalem where dozens of teens threw stones and burned tires. Police arrived at the scene and dispersed the crowd.

Hundreds of people also spent Friday protesting in Haifa against the IDF's ground operation in Gaza. The protesters called for attacks on Tel Aviv and blocked the main road that goes to Ben Gurion International Airport.

Police arrived on the scene and clashes insued. Thirty of the protesters were arrested.

The riots in Israel however, proved to be just a few out of dozens of protests and violent riots to spring up in the region against Israeli actions in Gaza. Protests also broke out in Jordan, Egypt, Lebanon and Ramallah in the West Bank in support of the Palestinian people and in opposition to Israel's ground operation in Gaza. The ground incursion into Gaza began Thursday night at 10:30 local time. Government officials said that the move was simply phase two in Operation Protective Edge, now in its 11th day. In Jordan, protesters in the cities of Al Karak and Irbid demanded that the border crossings between Egypt and Gaza be opened for the evacuation of the wounded and transport of aid materials.

In Egypt, several protests were organized in Cairo, Giza and Suez by the supporters of ousted President Mohamed Morsi and the Muslim Brotherhood. They condemned Israeli aggression against the Gaza Strip and blamed the Arab regimes for incompetence in defending the Palestinian people.