Security Council meets at Jordan's behest 24 hours after IDF sends ground troops into Gaza; Palestinians threaten to go to The Hague; Ban to travel to region on Saturday.

The Palestinian United Nations ambassador is threatening to go to the UN and international courts which would likely include the International Criminal Court if the Security Council doesn't act to protect Palestinian civilians from Israeli attack and end the conflict in Gaza.
Riyad Mansour told an emergency meeting of the council Friday that Israel's "savage" aggression into Gaza "cannot be justified by any means." "It is not self-defense," he said. "It is a vengeful military aggression intentionally planned and perpetrated by the occupying power on the civilian population under its occupation." Mansour said the Israeli campaign is designed to destroy "Palestinian unity and collapse of the national consensus government."

The council met to discuss the situation in the region, at the request of Jordan and Turkey.

Meanwhile, a senior UN official said that Secretary-General Ban Ki-moon will travel to the Middle East on Saturday in a bid to end the fighting, and is alarmed at a serious escalation that includes the new ground offensive by Israel.

Israel intensified its land offensive in Gaza with artillery, tanks and gunboats late Thursday, and warned it could "significantly widen" the operation.

"Israel has legitimate security concerns, and we condemn the indiscriminate rocket fire from Gaza into Israel that ended yesterday's temporary ceasefire. But we are alarmed by Israel's heavy response," UN political affairs chief Jeffrey Feltman told the UN Security Council on Friday.

Feltman said that since the start of the IDF ground offensive, Israel has made four incursions into Gaza, conducted 90 airstrikes and fired 91 missiles, most in a three-kilometer area. He also said that the IDF has fired 357 tank shells and the Navy another 150. 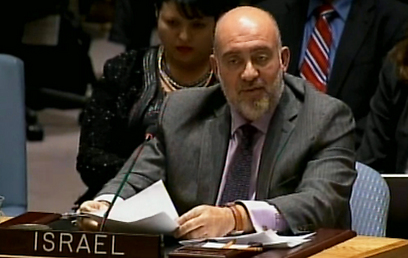 Ban will travel to the region "to express solidarity with Israelis and Palestinians and to help them, in coordination with regional and international actors, end the violence and find a way forward," Feltman said.

The UN chief will travel to the region "to express solidarity with Israelis and Palestinians and to help them, in coordination with regional and international actors, end the violence and find a way forward," Feltman said.

Like Israel's key ally the US, Ban has urged Jerusalem to do more to stop civilian casualties in Gaza.