Information from suspects' questioning helps IDF find tunnels, while troops on the ground work in tandem with Air Force.

Military aircraft and tanks launched attacks on dozens of terrorist targets in the south and north of the Gaza Strip late Tuesday night as soldiers exchanged fire with militants in the Shuja'iyya neighborhood of Gaza City and Operation Protective Edge entered its 16th day.

In addition to fighting Hamas terrorists and destroying their tunnels, the IDF troops in Gaza have another important mission: capturing wanted suspects.

Some 20 terrorists of different ranks have been arrested in the last few days and have been questioned by the Shin Bet in facilities in Israel. For now, many of them are providing the defense establishment with useful information. "They're providing the information they're meant to provide," a senior army official said.

Ynet has first pictures of the arrested Palestinians. 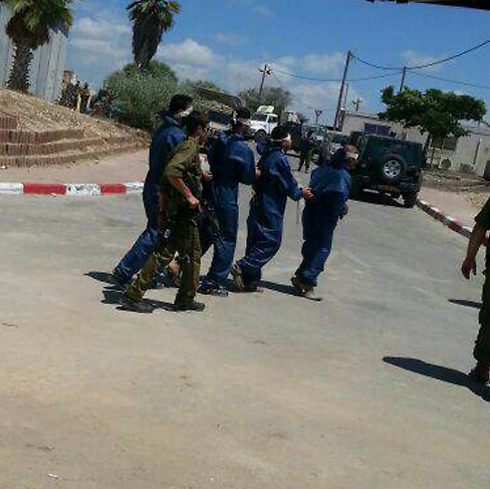 According to the Shin Bet, the IDF had intelligence about the tunnel that was found in the southern part of the Eshkol Regional Council, out of which 10 terrorists tried to infiltrate Israel, that allowed the troops to prepare with increased forces in the sector. "We're working with intelligence that is turning out to be very accurate in helping locate tunnels," another senior official said. Meanwhile out on the field, the air force and ground troops cooperate well. Early Tuesday morning, the IAF conducted a massive airstrike in the Gaza City neighborhood of Shuja'iyya. The struck targets were only 250 meters away from IDF ground forces and the hour-long strike included dozens of bombs on 100 buildings.

As dozens of fighter jets bombed the targets, most of them abandoned by civilians, the ground troops were at a safe distance. 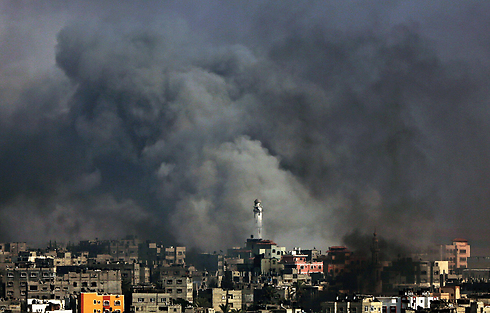 IDF bombardment of Shuja'iyya (Photo: EPA)
The Aerial-Ground Cooperation Center has been conducting hundreds of missions during Operation Protective Edge that combine ground forces, armored corps and attack helicopters and fighter jets. "We went through each APC and each soldier to make sure they were 250 meters away from the area of the strike. A minute before the strike we were still pulling the last APC that was stuck behind," a senior Air Force official said. "The heavy bombardment was meant to allow ground troops find the tunnels better with less threats to their safety," he continued, adding that "the soldiers always know the fighter jets are coming, including when the jets are striking terror cells trying to harm (the troops on the ground)."