Defense Minister Moshe Ya'alon visited an Iron Dome battery deployed in central Israel on Friday evening, telling the troops to be "ready for the possibility that we will instruct the IDF to significantly expand the ground offensive in Gaza very soon."

"At the end of this operation, Hamas will think carefully whether it was worth it to provoke us and whether it should provoke us in the future," said the defense minister, who got to watch a live interception of rockets fired at central Israel.

To the Iron Dome soldiers, the defense minister said: "It was important for me to come here. I don't know if you can see from here what the citizens of Israel feel, the enormous extent of the Iron Dome's contribution, and that of Air Defense Command as a whole. Hamas believed it would launch over 2,000 rockets at Israel and cause irreparable damage, and it turned irrelevant thanks to the Iron Dome.

"First and foremost, you at the Iron Dome batteries are saving lives. You're also preventing enormous economic damage. You allow us, the leadership, and extensive freedom of action in running the military campaign and in the decisions we make. You give calm to the Israel Homefront. The Iron Dome has reached a new high during this operation - of the results, of the extensive coverage, of the impressive capabilities. I've come here to tell you - well done. And thank you on my behalf, on the behalf of the prime minister and the government, and on behalf of the citizens of Israel." 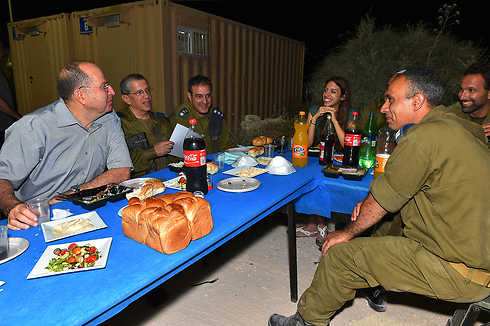 Ya'alon also shared with the Iron Dome soldiers some details of what was happening in Gaza: "We're doing what needs to be done in the Strip: Delivering a hard blow to Hamas' fighters, destroying the organization's terror infrastructure and demolishing the tunnels. Hamas is paying a heavy price and will pay an even heavier price."

'Give the IDF more time in Gaza'

Earlier, GOC Southern Command Maj.-Gen. Sami Turgeman urged the government to allow the IDF to continue its operation in the Gaza Strip.

"That is precisely what the (IDF) units are doing and every day of combat allows us to inflict more and more damage on this infrastructure."

Turgeman also discussed the decline in Hamas' powers: "Hamas terrorists' spirits are weakening, I see terrorists in a state of distress, abandoned by their commanders who left them at the front line and stayed behind – and in the face of that there are our reservist units and regular forces led by commanders who are at the forefront."

He also provided details regarding IDF's activities in the Gaza Strip: "We have been working steadfastly since the moment we entered the Gaza Strip to locate and destroy the tunnels. We were able to uncover and demolish at least half of the enemy's tunnels used for attacks and we are continuing to work with determination."

Turgeman stated that Hamas is "weakening", and spoke of their "feeling of distress". "I've witnessed a decline in all parameters, including in terms of its launches – that doesn't mean that the movement is left without capabilities, and it doesn't mean that our work is done."

According to the GOC Southern Command, the IDF is prepared both in terms of defense and offense. "We will continue to operate with the same determination against the tunnels as well as the Hamas infrastructure.

"Hamas has been building underground infrastructure for years. There's an underground Gaza – this isn't a slogan, but rather the plain truth. Our units have come across it and in every day of our combat we manage to damage this infrastructure.

"It took the movement five years to build the tunnels, some of the tunnels took four years to build, and we managed, in one week, to cause significant damage to this capability. I believe that every day of combat will allow us to deliver a fatal blow to what Hamas considers an important infrastructure."

Responding to the question as to how IDF troops in the Gaza Strip were preparing for the possibility of a ceasefire ordered by the political echelon before the military targets are reached, he said: "Our method is very simple – we started fast and since then are only increasing the pace."

Turgeman toured various units both within and surrounding the Strip, from Rafah in the south to Beit Hanoun in the north, and stated that the soldiers' fighting spirits are high, and that they understand that they are fighting for the security of the citizens of Israel. "I found determined and professional units, commanders and soldiers that continue to be committed to the mission – uncovering the tunnels and destroying them."

In addition to the tunnel-destruction mission, the various units have been operating in the field against the infrastructure of terrorist organizations, particularly of Hamas. "We are continuing in our operation to locate and destroy the tunnels, and at the same time are readying our other capabilities, if the situation calls for them," Turgeman said.