Security Cabinet votes in favor of UN humanitarian ceasefire after Hamas answers Israel's extended four-hour lull with rocket fire; Hamas: No deal if Israel does not remove forces, source: Calm in fighting means we can focus on dismantling Gaza tunnels.

Prime Minister Netanyahu has extended Saturday's ceasefire until midnight Sunday, despite the renewal of rocket fire by Hamas, which seriously wounded an Israeli.

Earlier Saturday, Israel agreed to extend a 12-hour ceasefire by four hours until midnight Saturday, even though Hamas and the Islamic Jihad refused to do so, firing rockets at Israel. Israeli tank fire killed a man in the southern Gaza Strip, a local official said.

United Nations Special Coordinator for the Middle East Robert H. Serry called Israel and Hamas to agree to extend the ceasefire by 24 hours, and this was the offer the cabinet accepted. 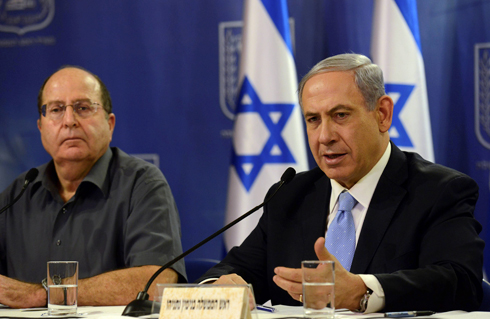 A senior political source close to the cabinet's proceedings said the IDF would respond to any attack during the break, and noted that "as fighting continues, work on destroying the tunnels slows down. The (ceasefire's) goals is to allow the pace of destruction of tunnels to increase while also securing international support."

One of the major stumbling blocks for the deal was the Israel's insistence that forces be allowed to remain in Gaza to continue to work to dismantle tunnels during the pause in fighting. The result from Saturday lull was that the IDF managed to unearth four new tunnels without suffering any casualties.

Thus, Erdan, who said he would vote against the extension, changed his mind and voted in favor instead, sources close to him said.

Hamas' spokesperson Sami Abu Zuhar said Hamas will not accept any ceasefire deal that does not include the removal of forces from Gaza: "Any humanitarian truce that doesn't include an IDF withdrawal from Gaza Strip and doesn't allow residents to return to their homes and evacuate wounded is unacceptable."

Before the Security Cabinet convened at to discuss an extended ceasefire deal, ministers voted to extend the humanitarian break in fighting until at least midnight Saturday in a telephone ballot conducted before the meeting.

"There is no deal to extend the ceasefire by four hours," Sami Abu Zuhar, Hamas' spokesperson said after Israel announced it would respect the lull for four more hours.

Hamas' leader Ismail Haniyeh said Saturday that "the resistance stands strong. There isn't a force on the planet that can extort our people. We have decided to take our freedom and dignity and we won't back down," stressed Haniyeh

Meanwhile, an Israel official said that "As far as Israel is concerned, there is no reason to prevent Gaza's people from stocking up on supplies, so long as the military can continue its work against the tunnels. Our war is not against the population," he declined to be named.

US Secretary of State John Kerry has pushed efforts to end 19 days of conflict in which over 1,000 Palestinians, many of them civilians, have been killed. He met counterparts from Europe and Qatar and Turkey - prime interlocutors with Hamas - at French-hosted talks in Paris.

Meanwhile, a Saturday morning report in Asharq Al-Awsat suggested that Hamas may be inclined to accept Kerry's week-long ceasefire proposal, out of the desire to allow the people of Gaza to rest during the end of Ramadan, or Eid al-Fitr.

However, senior officials told the newspaper that Hamas is seeking further clarification of the specifics of guarantees including in the deal. Namely, the organization reportedly wants solidify a time-frame in which Israel would lift the siege of Gaza. 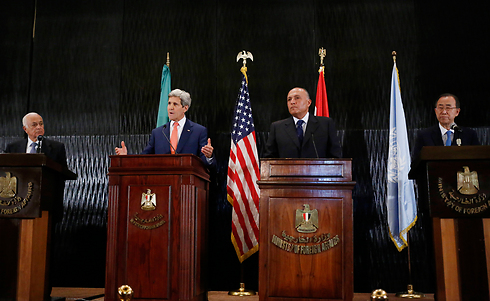 "All of us call on the parties to extend the humanitarian ceasefire that is currently underway," French Foreign Minister Laurent Fabius said after the meeting, which also included the foreign ministers of Britain, Germany and Italy.

"All of us want to obtain, as quickly as possible, a durable, negotiated ceasefire that responds both to Israeli needs in terms of security and to Palestinian needs in terms of of the social-economic development (of Gaza) and access to the territory of Gaza," Fabius said.

The ministers, along with senior EU diplomat Pierre Vimont, met on the same day that Israel began a 12-hour ceasefire during which it said it would press on searching for tunnels used by militants. The Islamist group Hamas, which rules Gaza, said all Palestinian factions would abide by the brief truce.

The United States refuses to deal with Hamas because it regards the Palestinian faction as a terrorist group.

"And we stop the loss of life by getting this ceasefire to roll over for 12 hours, 24 hours or 48 hours - and then again until we have established the level of confidence that allows the parties to sit round a table to talk about the substantive issues."

Israel on Friday rejected international proposals for an extended ceasefire, a government source said. Kerry said no formal proposals had been put forward but acknowledged there were still disagreements on the terminology to be used.

"For now the agenda is about getting the ceasefire extended without further preconditions...Once we start going into the demands of the different parties, and the underlying grievances, we run into problems," Hammond noted.

German Foreign Minister Frank-Walter Steinmeier said a ceasefire would only last if Gaza "no longer serves as weapons depot for Hamas and living conditions of the people improve".

It is worth noting that the first to announce the ceasefire was Kerry, in his Cairo speech on Friday. Later in the day Hamas also confirmed the deal. However, Israeli officials were reluctant to confirm the reports, and the Prime Minister's Office chose not to inform the Israeli public regarding their position. Only at 2:21 am Saturday did the IDF Spokesperson Unit let out a official press release confirm the ceasefire will come into effect.

After meeting Friday afternoon, the cabinet still had not made a decision on Kerry's proposal. After long hours of deliberations, the ministers went on a break and were said to have planned to resume the meeting either later Friday night or on Saturday.

Attila Somalvi and the Associated Press contributed to this report