Qatari Emir and Haniyeh in Gaza in 2012
Photo: AP

Qatar invests in the West, and funds Hamas

Qatar's investment authority may be slowly taking over the world; and the Western world is indirectly funding Hamas because of it. Isolated and almost alone in the Arab world, Hamas has one sponsor left and that is the world's richest country, on paper at least. Jonathan Schanzer, vice president of research at the Foundation for Defense of Democracies, told JNS that Qatar is "believed to be the primary financier of Hamas." And the Islamist group, which is currently at war with Israel in Gaza, is reported to have estimated annual expenses of some $1 billion. In 2012, then Qatari Emir Hamad bin Khalifa Al Thani became the first head of state to visit Gaza since Hamas seized power there in a bloody 2007 battle with Fatah. Al Thani, who was driven around Gaza by themn Hamas prime minister Ismail Haniyeh, pledged some $400 million to the strip. His son, the British-educated Tamim bin Hamad Al Thani, took over as emir following his father's abdication last year, and is known to look on Hamas just as favorably. 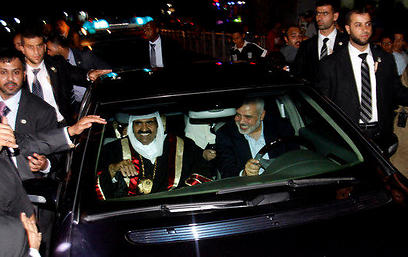 The Qatar Investment Authority (QIA) is the one of the most ambitious and fast-growing in the world. Over the years, it has moved in on many well-known companies and landmarks, including many of Britain's most iconic ones.

Last week, former president Shimon Peres slammed Qatar as "the world’s largest funder of terror," stating that it should not provide money that is used for rockets and tunnels meant to kill civilians, and if it wants to help, it should build, "but should not be allowed to destroy."

The public may be surprised to find out just how much it is indirectly funding Hamas.

According to Bloomberg, the QIA, which already owns over $100 billion worth of assets, said it’s prepared to increase investments in the UK, after claiming shares of and buying out major companies such as supermarket giant Sainsbury's, the exclusive Harrods department store and leading bank Barclays Plc, among others.

Ahmad Al-Sayed, chief executive officer of the Qatari wealth fund, told Bloomberg that the QIA has its eye on Britain as a major investment opportunity, as it has "great systems, great regulations."

He also told Bloomberg that since its purchase of Harrods in 2010, the QIA has invested approximately $413 million in the business, gaining major revenue.

Additionally, Qatar has shares in a number of oil companies, such as Total SA, as well as Volkswagen, Porsche Automobil Holding SE, and Glencore plc. Meanwhile, the Qatar Foundation for Education, Science and Community Development is the sponsor of FC Barcelona, and the QIA owns Paris Saint-Germain. 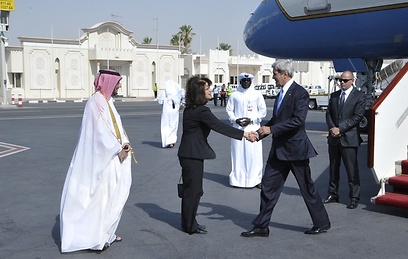 John Kerry being welcomed to Doha in June (Photo: State Department)
But here lies the dichotomy, according to Schanzer, Qatar depends on the US as an ally, and invests lots of money there, but on the other hand Doha also has strong ties to Hamas. "Just miles away from (the US airbase in Qatar), you can find the head of Hamas (Khaled Mashal), and there was even a Taliban embassy there for a while too. All of these things make for a foreign-policy anomaly," Schanzer said.

Israeli peace activist Gershon Baskin refuted all claims that Qatari money had been used to fund Hamas terrorist activity. That money, he argued, came from revenue from the smuggling tunnels.

"Let (me) correct some common lies," Baskin wrote Tuesday on Facebook. "Most of the money Hamas used for building tunnels and rockets came from the revenues from smuggling tunnels - the underground economy of Gaza which was created because Israel and Egypt cut them off from the world yielded multi-millions a month for the Hamas government in taxes and fees for using the tunnels. Since 2012 Hamas has received very little financial support from anyone."

The funds provided by Qatar, the veteran activist said, was used solely for construction.

"Qatari money went directly for fuel and for building a couple of neighborhoods and a few tower buildings in Gaza. Iranian money stopped. the so-called experts who talk about using donor funds provided for Gaza for rockets and tunnels are lying and repeating lies. Cement coming from Egypt cost 1/5 the price of Israeli cement. Fuel from Egypt costs 1.60 NIS per liter as opposed to the Israel 7.5 NIS.

"The economic blockade of Gaza is what created the revenues for Hamas, not donor funds."