In era in which public opinion is part of warfare, Israel and Hamas fighting additional war over the identity and number of causalities in Gaza, and Israel charges Hamas with turning militants into innocents in quest for world sympathy.

The latest round of fighting between Israel and Hamas extends far beyond the urban warfare playing out in the cities and towns of the Gaza Strip; the Israeli cities targeted by waves of Palestinian rockets; and the seek-and-destroy mission of locating and eradicating the elaborate and intricate network of tunnels revealed to extend deep into Israeli territory and beneath southern Israeli communities.

Beyond the shooting war, there is a war of images seeking to justify the actions of the players in the eyes of the world. To accomplish this, Hamas seeks to create the belief that most - more than 80% - of the 1,137 Palestinians who died during the first two weeks of fighting are noncombatant women and children - innocent victims of outrageous Israeli aggression. Israel, on the other hand, asserts that the process of identifying the dead is manipulated in order to predetermine the conclusion that Israel has relentlessly slaughtered innocents rather than admit the obvious use of civilian human shields and the commensurate benefits to the Hamas narrative of a high body count.

First and foremost for Israel is that the international community understand who it has targeted and accept its assertion that the casualty list contains a significantly higher percentage of adult male combatants than women and children. 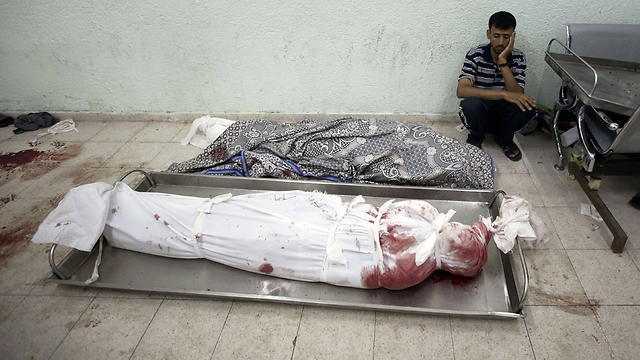 Reuven Ehrilch of the Meir Amit Intelligence and Information Center, an Israeli think tank, told The Media Line that its comparison study of the names of the Palestinians killed in Operation Protective Edge and the relationship between terror groups and uninvolved citizens revealed that out of 152 names checked, 71 were identified as terror agents and 81 were uninvolved citizens. According to Ehrlich, the Hamas-controlled interior ministry has ordered social networking done in the Gaza Strip to describe every Palestinian who died as an “innocent civilian.”

The group worked from a list compiled and supplied by the Gaza government’s Ministry of Health, a list fraught with problems and inaccuracies according to Ehrlich. “The list was done hastily and later changes were made. There were a number of false names listed; the details of the dead are only partial, making identification suspicious. There are names used more than once and some might have been killed by their own fire rather than by the Israeli army. The list doesn’t differentiate between civilians and terror operatives. All the dead are listed as “shahids” (martyrs). The list propagated by the Hamas-controlled Gaza ministries is not necessarily in synch with the one being compiled by a United Nations agency. A spokesperson from the United Nations Office for the Coordination of Humanitarian Affairs (OSHA) who spoke on condition of anonymity because she was not authorized to speak to the media, told The Media Line that as of the morning of July 29, 1,109 Palestinians, including at least 821 civilians (of whom were 239 children, and 124 women), 179 fighters and 109 with status undetermined, have been killed since the start of hostilities on July 7. 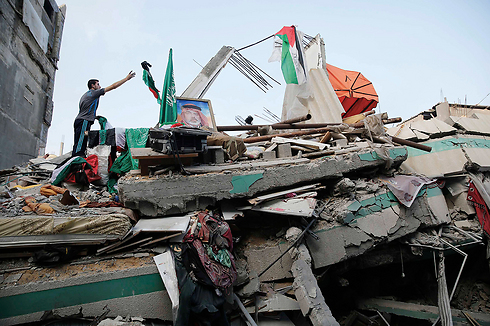 Destroyed home of Hamas leader Ismail Haniyeh
The spokesperson explained that “the Protection Cluster collects and verifies information regarding fatalities in Gaza, and these preliminary figures are used by the humanitarian community in situation reports. In terms of methodology, the UN Office of High Commissioner for Human Rights (as Protection Cluster) compiles initial reports of fatalities from the media and other sources, and works with Palestinian and Israeli human rights organizations to cross-check and verify these reports, and whether the individuals are civilians or combatants. Fatality figures are only included once they have been corroborated by more than one organization.” Israeli officials believe the problems with the list are not accidental or coincidental. Ehrlich charges that the list is intended to serve as evidence that “Israel is slaughtering civilians to create a structure of facts for Hamas’s foreign policy and to lay the foundation for legal actions Hamas intends to use against Israel ‘the day after’ Operation Protective Shield” is concluded. Ehrlich alleges that a pattern of double identification that surfaced among a number of the names checked means the individuals were simultaneously operatives of terrorist organizations and on active duty with the Palestinian security forces in the Gaza Strip. In six cases, names identified were part of the Izz ad-Din al-Qassam Brigades, the military wing of Hamas; while three were serving in the national security force of the Palestinian Ministry of Interior and three served in the police. Upon their deaths, each organization issued a separate eulogy poster for its fallen member. Two main organizations are fighting against the Israelis: Hamas, which was elected to control the Gaza Strip in 2006, through its so-called military wing known as the Al-Qassam Brigades; and the Palestinian Islamic Jihad (PIJ), through its the Al-Quds Brigades. Both are guerilla-like armies that participated in the previous rounds of fighting against Israel in 2009 and 2012. The Israeli military is just beginning to release information about those it’s killed. Through 21 days of war, Israel’s strongest blow to PIJ was the assassination of Salah Abu Hassanein, commander of its Military Media Division. Hassanein oversaw Islamic Jihad’s psychological warfare targeting the Israeli people and Gazans alike. A frequent interviewee since the Second Intifada that began in 2000, Hassanein’s face and voice were familiar to Gaza’s residents as was his message encouraging armed conflict with the Jewish state. The Israeli army also killed PIJ’s regional commanders who controlled the northern and central sectors of the Gaza Strip, as well as Shaaban Dakhdoukh, commander of the forces in Zeitoun, who worked on burying long-range rockets and helped to smuggle weapons for his forces. Mahmoud Sinwar directed military activities, including rocket fire and was involved in the creation of attack tunnels into Israeli territory and the raid in which soldier Gilad Shalit was captured. The Israeli command believes it has inflicted heavy losses on Hamas’s Al-Qassam Brigades, the full extent though not yet known because many of fighters’ bodies are believed to be buried beneath tons of rubble of destroyed tunnels they had been hiding in. Mohammad Shaaban, commander of Al-Qassam’s naval force, was targeted and killed along with 3 other people while driving his car in Gaza City. Shaaban was behind Hamas’ increasing attempts to infiltrate into Israel from the sea in order to conduct mass killings in Israeli coastal communities. In fact, such an attempt was thwarted on the day of his killing, when 5 terrorists were intercepted by the army when they emerged onto the beach at Kibbutz Zikim where they were spotted by soldiers and killed. Also dead in a targeted assassination is Osama Al-Hayyah, who commanded Al-Qassam’s forces in Shaja'iah, the site of one of the earliest and fiercest battles of the Israeli operation. Al-Hayyah is the eldest son of Dr. Khalil Al-Hayya, a Hamas member of the Palestinian Legislative Council and a founding member of Hamas. Not all attempts at targeted killings have succeeded. One example is Ayman Siam, head of Hamas’ rocket unit, who was injured but escaped death.