Tunnels and rockets, but no top brass: Why Hamas' leadership is still alive

Feature: While past operations saw quick targeting of group's top military and political leadership in Gaza, the current op has been almost completely devoid of high-profile targeted killings; why can't the IDF take out Hamas' top commanders?

During the opening days of Operation Pillar of Defense, the IDF's last operation in Gaza, in 2012, the IDF took out Hamas' top military commander Ahmed Jabari – however, Israel is 23 days into Operation Protective Edge and most of Hamas' commanders are safe and sound.

On Tuesday, Finance Minister Yair Lapid told Ynet that the moment Hamas' top commanders leave their bunkers "Israel will take them out". However, it seems that despite the complex and massive intelligence efforts by the Shin Bet to find these leaders, they still remain safe from Israel's fire. 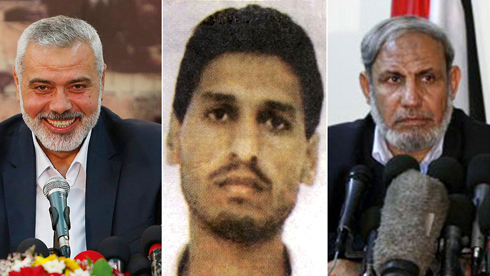 The IDF and Shin Bet have managed to find and destroy the homes of numerous field commanders from both Hamas and Palestinian Islamic Jihad, as well as their company and battalion commanders.

However, the majority of the Hamas' military wing's top brass has managed to elude Israeli forces. Some are hiding in bunkers, while other find shelter among Gaza's civilian population in mosques and hospitals. Even the top and middle echelon of the terror groups' political leadership has managed to keep out of harm's way.

This stands in stark contrast to the way things played out in Operation Pillar of Defense, which began with the killing of Ahmed Jabari, the second-in-command of Hamas' military wing. His targeted killing was followed by the deaths of a number of senior commanders in the group's military wing, including that of almost all of Hamas' regional commanders. 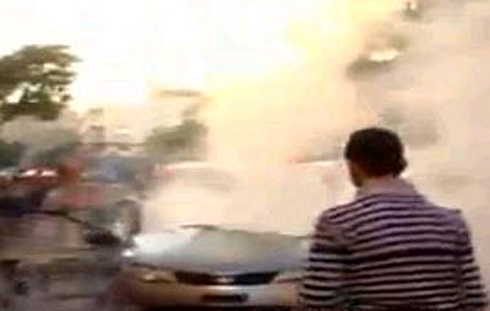 Targeted killing of Ahmed Jabari in 2012
Even in the operation before that, Operation Cast Lead, Nizar Rayan – who was the group's liaison between its military and political command – and Siad Siam – who was the interior minister – were killed by the IDF during the early stages of the operation.

No shock, no awe

The main difference between those two past operations and the current one are that, unlike Protective Edge, its predecessors began with a quick and destructive opening blow by Israel that achieved the operation's central goal – hitting Hamas with shock and awe while dealing a massive blow to strategic targets in their terror infrastructure.

On the other hand, Protective Edge was easily foreseen by Hamas' political and military leadership, giving them ample time to take to underground shelters – as early as two days before the operation began according to some assessments.
IDF destory home of Hamas leader Haniyeh on Tuesday (Video: Reuters)    (צילום: רויטרס)
X

"The targeted killings – those people vital to Hamas' functioning – are more valuable than any death toll," now Defense Minister Moshe Ya'alon said during the previous operation, when he served as the intelligence minister. Nowadays, even if Israel knows in which tunnel or subterranean bunker this or that commander can be found, they have no ability to take them out from the air without causing numerous civilian casualties.

Hamas has built well-fortified bunkers for itself, some of which are deep within the ground and internally reinforced with concrete. It seems Hamas has also prepared a communication network which has yet to be breached by Israel, and allows them to control what happens on the ground from well beneath it.

Moreover, the aerial hunt conducted by the IAF has yet to yield results in the form of senior Hamas officials or commanders because Hamas has almost complete compartmentalized its operations, preventing the IDF from picking up information from loose-tongued low-level operatives, while senior commanders seem to be maintaining radio silence. Unlike previous conflicts, Hamas' military commanders are making a special effort not to leave their bunkers and underground command centers. Thus, for example, a tape surfaced Tuesday in which Mohammed Deif, head of the Izz ad-Din al-Qassam Brigades and therefore probably the IDF's top target, can be heard from his underground bunker saying that rocket fire will stop only when Israel lifts its blockade on Gaza. Moreover, despite the destruction of numerous homes of Hamas' middle management commanders, some of which also served as front-line command centers, the group is maintaining order and ranks in its operations, sometimes by using curriers running from command center to command center, carrying notes with orders to field commanders instructing them to attack soldiers or fire rockets. Also, unlike in previous operation, Hamas prepared organized fighting plans and protocols for its six regional commands throughout the Strip, thus rendering the need for direct orders almost completely obsolete, and saving top commanders numerous risks which could expose them to Israel's wrath. Any communications that need to take place between group members are done almost completely through secured landlines, and not mobile phones which are easily tapped by the IDF. Earlier this week, IDF forces from the elite Maglan Unit who raided a Hamas commander's house found, in addition to munitions and bulletproof vests, a number of discarded cell phones, indicating that Hamas' forces have grown more disciplined, and this seems to be true for ground forces as much as higher ranking officials. At the beginning of the week, Hamas claimed the reason for the IDF's failure to kill its commanders was that the terror group had "cracked" the Shin Bet system for finding the whereabouts of Hamas men. According to the group, the Shin Bet used to call relatives of Hamas officials and leaders from a Palestinian number, inform them that their terrorist loved ones had died in an IDF attack, and then track the subsequent phone calls they would make to find the operative the IDF was searching for. Using location technology, the Shin Bet would then identify the location of the calls, in the hopes of either reaching the official himself or their immediate circle, and launching a targeted attack.

In the meantime, from Mahmoud al-Zahar to Ismail Haniyeh, Hamas' top leaders are nowhere to be found. They are probably safe and sound deep in the heart of Gaza's underground system of tunnels.

Legend has it that they are both in the group's main command center, built directly under Gaza's al Shifa hospital, as was the case in of Operation Pillar of Defense, and we can only assume holds true today as well.

An IDF officer in charge of some of the attacks said that the rocket launching sites attacked by Israel are sometime also homes of senior commanders.

However, in the meantime, over three weeks into the operation, no serious damage has been caused to Hamas' top commanders.