IDF: Cement used by Hamas for tunnels could build 100 kindergartens

GOC Southern Command Maj. Gen. Turgeman says 'we are only a few days away from destroying all terror tunnels.'

"With the amount of cement Hamas used to build these tunnels, it could have built two hospitals, 20 clinics, 20 schools, and 100 kindergartens," said GOC Southern Command Maj. Gen. Sami Turgeman on Wednesday.

On the 23rd day of Operation Protective Edge, Turgeman said he believed "we are only a few days away from destroying all the terror tunnels." 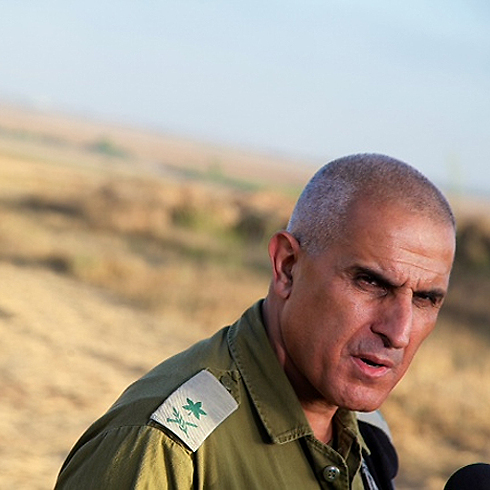 GOC Southern Command Maj. Gen. Sami Turgeman (Photo: AFP)
The GOC Southern Command said "the fighting continues, we have killed dozens of Hamas' elite soldiers and arrested dozens of Hamas fighters. Every day that passes we are closer to achieving our goal of destroying the tunnels." Turgeman noted that "it is important to remember that this is a significant operational and engineering challenge. Hamas has been working on these tunnels for four years and in two weeks we have managed to demolish all of its tunnels." According to Turgeman, the operation "has a defined mission, to hit Hamas hard, and destroy the tunnel infrastructure. In every place we identify tunnel infrastructure, we act. No forces are left in the Strip without need. There are no tunnels into our territory. Yesterday we expanded the operations in the center and southern Strip." GOC Southern Command said soldiers needed to maintain high standards of awareness after Hamas terrorists infiltrated into Israel and killed five soldiers on Monday. "The aim of the terrorists to attack the towns and people in the area was not achieved. Still, I expect better results from our forces from every encounter with terrorists."