Netanyahu: IDF will complete tunnel destruction, with or without a truce

Despite resolute words, prime minister lowers expectations, saying 'there's no 100% guarantee' all tunnels will be destroyed.

Prime Minister Benjamin Netanyahu stressed on Thursday that he would not accept any ceasefire proposal that does not allow the IDF to complete the destruction of terror tunnels.

"As of now, we have neutralized dozens of terrorist tunnels and we are determined to complete this mission, with or without a ceasefire," Netanyahu said at Thursday's government meeting, during which ten rockets were fired at Sderot.

"Therefore I will not agree to any proposal that does not allow the IDF to complete this work which is important for the security of Israel's citizens." 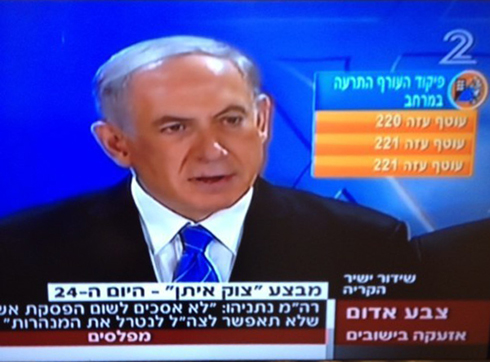 Code Red siren blares 6 times during Netanyahu's comments.
"The IDF is continuing to act with full force across the Gaza Strip. IDF soldiers are completing the neutralization of the terrorist tunnels. These tunnels would have enabled Hamas to abduct and murder civilians and IDF soldiers via simultaneous attacks from many tunnels that penetrate our territory. We are now dismantling this ability," he said.

"Hamas has taken harsh blows from the IDF and ISA. We have struck hard at thousands of terrorist targets: Command centers, rocket arsenals, production facilities, launch areas and hundreds of terrorists have been killed," he continued.

The IDF estimated on Wednesday that accomplishing that task, already into its fourth week, would take several more days. 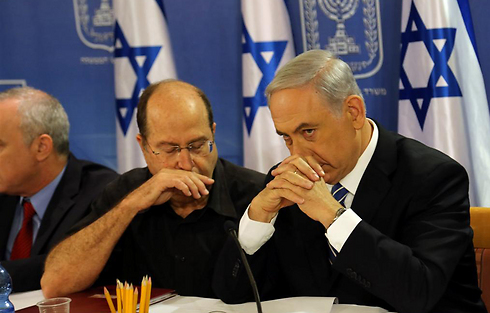 Defense Minister Moshe Ya'alon and Prime Minister Benjamin Netanyahu at the weekly cabinet meeting (Photo: Tzvika Tishler)
Despite his resolute words, Netanyahu also made sure to lower expectations: "I said at the start of the campaign: There is no guarantee of 100% success, just as Iron Dome does not provide a complete answer, but the IDF actions have impressive results in the field and these actions are continuing at full strength even now."

Leaving open the option of widening a ground campaign in the Hamas Islamist-dominated Gaza Strip, the IDF called up an additional 16,000 reservists. A military source said they would relieve a similar number of reserve soldiers being stood down.

The prime minister also passed criticism at some of the government ministers.

"There is a minority among the public which, precisely at these times, chooses to take a more extreme position on this or that side. I say to you: Do not harm the special unity that we have. Mind your words and be careful with your deeds. And, more than anything, government ministers must serve as personal examples for the public at large. At this time, the nation expects all of us, especially government ministers, to unite behind the goal," he said.

"We know Hamas and the other terror organizations are hiding the large number of their dead terrorists," he said, noting one should not believe statements from Hamas claiming the contrary. "The reality and the facts on the ground are that Hamas is paying a very heavy price."

IDF Chief of Staff Benny Gantz said that while the army's fighting in difficult areas, "the troops are handling the missions they're given excellently and continue with determination."