White House spokesperson slams Israel for shelling of UN schoo, hints IDF failing to 'live up to their high standards.'

The White House says there is little doubt Israeli artillery hit a United Nations school in Gaza and is describing the shelling as "totally unacceptable and totally indefensible."

White House spokesman Josh Earnest cited statements from the UN blaming Israel for the shelling, as well as the Israeli government's acknowledgement that it was firing in the area of the school.

At least 16 people were killed and some 100 wounded when an artillery struck a UN school at dawn on Wednesday in Gaza's biggest refugee camp, the UN said. 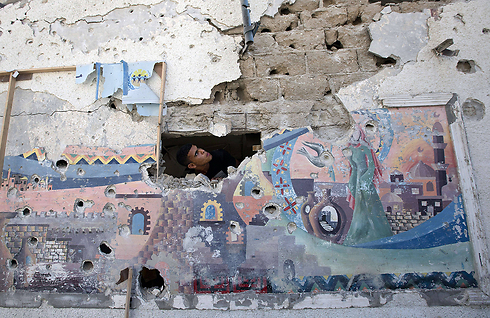 Earnest says that while the US supports a full investigation into the matter, "it does not appear there's a lot of doubt about whose artillery was involved."

In its initial statements after the shelling, the White House condemned the attack but specifically did not assign responsibility.

While the U.S. says it supports Israel's right to defend itself against Hamas, officials have repeatedly called on Israel to do more to stem civilian casualties. More than 1,300 Palestinians, mostly civilians, and more than 50 Israelis, almost all of them soldiers, have been killed since July 8.

The White House continues to call for an immediate humanitarian cease-fire but there appeared to be little sign that one was imminent.

Prime Minister Benjamin Netanyahu said Thursday that Israel will destroy the Hamas tunnel network in the Gaza Strip "with or without a cease-fire," as the military called up another 16,000 reservists to pursue its campaign in the densely-populated territory.

Speaking in Costa Rica earlier on Wednesday, Secretary-General Ban Ki-moon condemned the attack as outrageous and unjustifiable. "It demands accountability and justice," he said. "Nothing is more shameful than attacking sleeping children."

President Barack Obama huddled with US lawmakers Thursday to discuss the numerous foreign policy crises facing his administration, including tensions with Russia and the war between Israel and Hamas.

The meeting came amid rampant criticism of Obama's foreign policy from Republicans in Congress. Some of those who have criticized Obama were among the 14 lawmakers who attended Thursday's meeting, including Senate Minority Leader Mitch McConnell, who said shortly before the discussion that the president would leave the world "a more dangerous place" for his predecessor.

Sen. Dick Durbin, a top Democrat, said Obama spoke about a number of issues: the crisis in Ukraine, the clashes in Gaza, the ongoing civil war in Syria, and the situations in Afghanistan and Iraq.

Durbin said Obama faced no pushback from lawmakers on the administration's efforts to seek a cease-fire in Gaza. The president has been taking an increasingly tough line with Israel over the mounting civilian casualties at the same time lawmakers from both parties press him to avoid pressuring Israel to halt its military operations.

Durbin said the president and lawmakers agreed that no country should be expected to tolerate thousands of rocket attacks.

"Israel has to defend itself," he said. The senator added that Obama reported no progress on reaching a cease-fire between Israel and Hamas.