As IDF soldiers who fell in Gaza are interred on Mt. Herzl, children from Israel's south enjoyed a day away from the endless rockets only 300 yards away.

Last Tuesday, with just 300 yards separating them from preparations for military funerals at Mt. Herzl, the staff of the Fellowship Village concluded its own preparations for the site's opening.

That afternoon, as IDF soldiers who fell in Gaza were interred in the upper part of the mountain, Israeli children from the south, brought to the capital for a day’s brief respite from the endless rockets, screamed in transient happiness in the swimming pool of the colorful compound, nestled in the Jerusalem Forest. 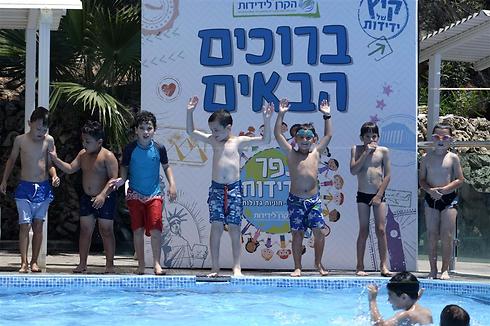 As the children disembarked at the village, four loud booms could be heard, creating an air of immediate tension among the young ones all too used to explosions. In an adjacent field they were performing a sound check for a large drum system, but to the sensitive ears of the children of the south, it could mean only one thing.

During that day, 800 children passed through the various stations established in the village - each station representing a different country. In the “London” Hall, which had been turned into a sophisticated recording studio, the children recorded a song together. In the “New York" compound, deep in the forest, they learned animation - and how to jump frenetically on the inflatable installations. In the Greek compound, which has been transformed into an Olympic stadium, they attempted the long jump and walked on balancing beams. For southern resident Sigal, who arrived at the village with her children and husband, it was a welcome respite. Physically speaking, she says, the family has become closer than ever, and her children don’t leave her side. "They don’t go to the bathroom alone. They barely agree to sit in front of the computer by themselves", she says. They all sleep together in the same bed, and now they are all together in the pool. “One night”, she says, “there was a siren that none of us heard. The next morning our oldest son heard about the fallen rocket from one of his friends. He made us feel as if we had betrayed his trust; as if we had fallen asleep on watch and not waken up. Since then he’s had difficulty sleeping. He’s also begun to stutter a bit. He tells us that he’ll stay awake at night in order to get us out bed if there’s a need.” The boys of the basketball and soccer camp from Kiryat Gat are playing as if the situation hasn’t affected them. But when his tough campers aren’t listening, counselor Aviad Elmakias says they only appear apathetic. “When the sirens sound they sprint impressively to the protected space.”

Sara Netanyahu, wife of Prime Minister Benjamin Netanyahu, was the guest of honor during the inaugural day of activities at the Fellowship Village. One of the accompanying mothers, who didn’t know about the VIP guest, had tears in her eyes.

“It moves me that she came to speak with the children," she says. "These are such difficult days for us. Every embrace and every show of attention is so important.” 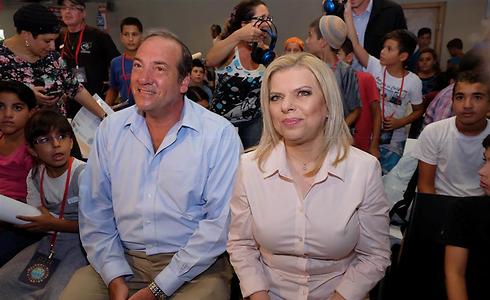 Sara Netanyahu and Rabbi Yechiel Eckstein (Photo: Oren Nachshon)
Mrs. Netanyahu and Rabbi Eckstein speak for an hour with a group of children who came from Sderot. As the children sweetly describe what they’re going through, the prime minister's wife listens to everyone, and Rabbi Eckstein, who is trying to compensate the children for the lost summer, promises them that they will have fun. Naomi and Hallel are 9-year-old girls from Nitzan, a community between Ashdod and Ashkelon, which is also home to evacuees from Gush Katif, the Gaza settlement bloc Israel removed in 2005. The two look like old friends, despite having only recently met. When Naomi moved to Nitzan from nearby Ashkelon, Hallel received her warmly. A few days ago they were walking in the street when they heard a siren. “We saw my house on the horizon and started to run," recalls Naomi. "The siren was very long-lasting. We reached the door, but it was locked. I shouted to my brother Avraham to open the door, but he didn’t hear me. Three interception missiles were already in the sky and I yelled to Hallel to lie down on the ground with her hands over her head. The siren went on and on, but there was no boom. Then we ran to the back door of the house. By the time we finally reached a safe place, it was all over.” Perhaps because the observer knows where they come from and what they’re going through (or perhaps because it’s the truth), the hundreds of children in the colorful village behaved slightly different from their peers - a little quieter, a little less boisterous. Late in the afternoon, the busloads of children return to the south. On the road opposite, IDF command vehicles head up the mountain, making their way to the military cemetery.