Palestinians immediately accused Israel of breaking the ceasefire by bombing a house in Gaza City, however the IDF claimed that the attack took place before the ceasefire came into effect. 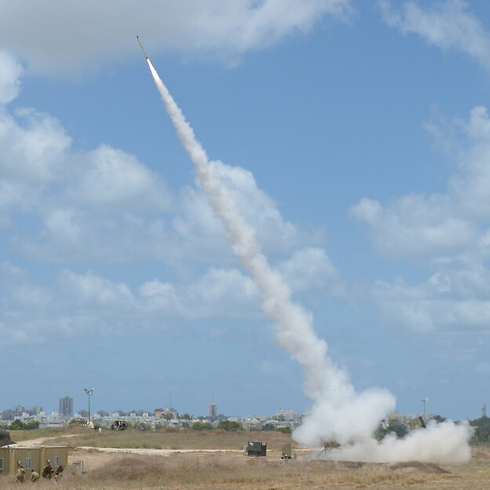 One rocket was intercepted over Ashdod while another two were felled over Ashkelon; no injuries or damage were reported.

At roughly 9:30 am, seven rockets slammed into communities in the Eshkol Regional Council.

Hamas fired 119 rockets and mortar rounds on Israel over the course of Sunday, the IDF said. Eight of intruding missiles were intercepted by the Iron Dome.

IDF strikes on Gaza meanwhile continued early Monday, killing 11 people, including an Islamic Jihad commander, raising the death toll since the July 8 beginning of the confrontation to over 1,820 according to Palestinian medical sources.

Palestinian sources claimed Israel had broken the ceasefire. Gaza Health Ministry spokesman Ashraf Al-Qidra claimed an eight-year-old girl was killed and 30 people wounded in an IDF strike on the Shati refugee camp in the northern Strip.

According to the report, the strike took place after the humanitarian truce had gone into effect, however the IDF claimed that the attack took place before the ceasefire came into effect.

Later Palestinians reported that the IDF attacked the Nuseirat refugee camp in the central Gaza Strip. There are two wounded people at the scene. 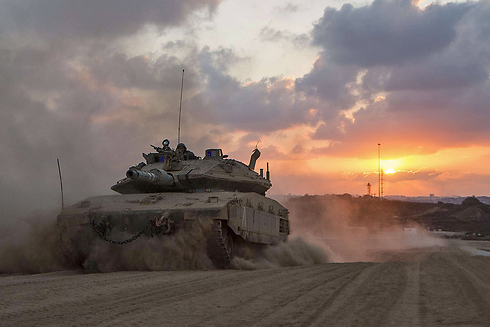 According to the Shin Bet, Mansour had been in charge of intelligence matters for the Islamic Jihad in the Gaza Strip and during the current operation, had been responsible for directing steep-trajectory rocket fire towards Israel. 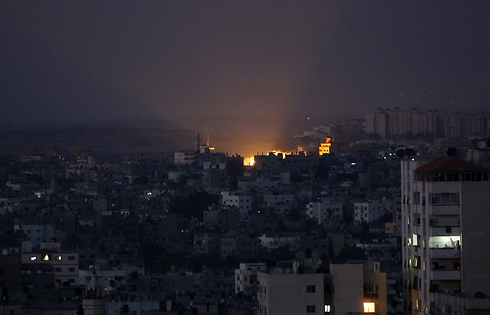 The IDF called on residents from Abasan al-Kabira and Abasan al-Saghira in northern Gaza to return to their homes, and according to the IDF, reinforcement work on the border fence with Gaza is already underway.

The IDF will complete its mission of destroying the remaining tunnel shafts in upcoming days, and forces hold the entire Gaza perimeter, along the border. The IDF has instructed the forces remaining in Palestinian territory to remain on high alert, as Hamas might use the hours before the ceasefire to attempt an attack or kidnapping of forces. 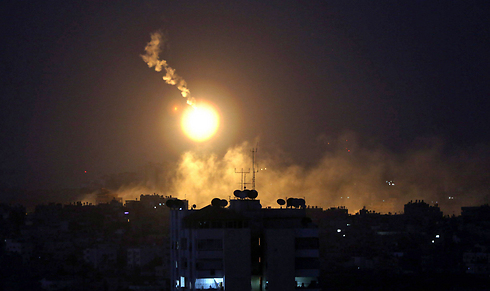 Overnight attacks in Gaza (Photo: EPA)
The IDF said that it had on Sunday targeted three Islamic Jihad militants on a motorbike "in vicinity of an UNRWA school in Rafah." UN Secretary General Ban Ki-moon called the attack on the school sheltering some 3,000 Palestinians who had fled their homes due to the fighting "a moral outrage and a criminal act". US State Department spokeswoman Jen Psaki said Washington was "appalled" by the attack and called for a "full and prompt" investigation. "Israel must do more to meet its own standards and avoid civilian casualties," she said.

French President Francois Hollande said the bombing of the school was "unacceptable", backing calls by Ban "to ask that those responsible for this violation of international law answer for their actions", without saying who he considered responsible.

In an early Monday statement, Prime Minister Benjamin Netanyahu said "Israel does not aim its fire at civilians and is sorry for any attack that unintentionally hits civilians," without directly addressing the attack on the school.

Since July 8 Gaza militants have fired over 2,560 rockets and mortar shells that struck Israel, a military spokeswoman said Monday, with another 557 rockets intercepted by the Iron Dome defense system.

Two Israeli civilians and a Thai farm worker were killed by mortars and rockets fired at Israel by Gaza militants in the past four weeks, with 64 soldiers killed in clashes and shellings in and around Gaza.

In his Monday statement, Netanyahu said the Gaza operation "will continue until its goals are reached: a return of quiet and security for Israeli citizens for a long period, while significantly harming terror infrastructure."

"After completing our actions against the terror tunnels aimed at a mass attack against Israeli civilians, the IDF will deploy for further activity according to our security needs, until our goals are achieved," he said, echoing a Saturday remark seen as being the harbinger of a unilateral Israeli withdrawal. On Sunday, the army confirmed it had begun withdrawing some troops from Gaza. "We are removing some (forces)," Lieutenant Colonel Peter Lerner told AFP, saying troops were "extremely close" to completing a mission to destroy a network of tunnels. "We are redeploying within the Gaza Strip, taking out other positions," he said, indicating that the military was "changing gear". Witnesses had on Saturday reported seeing troops leave Beit Lahiya and Al-Atatra in the north as well as from villages east of Khan Yunis in the south. On Sunday, AFP correspondents reported around 100 tanks gathering in the border area outside Gaza where they had not been before, having just pulled out, while others were seen driving away from the border.

AFP, Elior Levy and Roi Kais contributed to this report