Terror in Jerusalem: One killed, six hurt when terrorist goes on rampage in industrial digger

A pedestrian was killed and six other people were wounded Monday afternoon when a terrorist went on the rampage in an industrial digger in central Jerusalem.

VIDEOS: Terror returns to the streets of Jerusalem

The terrorist hit the man as he walked on the street, as well as a bus and a car before being shot dead by an officer from the Israel Prison Service who was in the area. Images from the scene showed an overturned bus, and the the terrorist dead in the cabin of the digger. 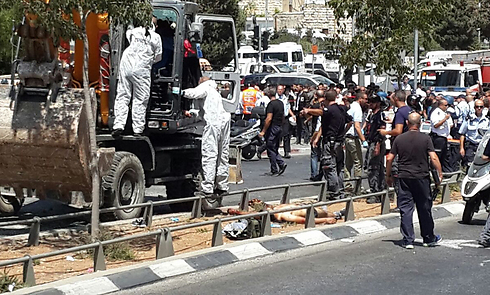 Security officials at the site of the attack (Photo: Tazpit News Agency)

Magen David Adom rescue service said that they received a report at around 1:35 pm that a tractor had apparently hit the pedestrian and then an empty bus. Its emergency personnel had treated a man in his 20s and the 45-year-old bus driver at the scene, the service said.

X
LIVE FROM THE SCENE OF THE ATTACK

The terrorist was named as Mohammed Naif Ja'abis. Local media said he was from the East Jerusalem village of Jabel Mukaber. Israel Police spokesman Mickey Rosenfeld confirmed that the terrorist was an Arab man in his 20s from East Jerusalem. Officials said the assailant was known to the police from a previous security incident.

Ja'abis left the construction site in the digger and after travelling some 50 meters hit the bus, said a member of the Israel Police. Three people were lightly hurt when the bus was attacked. He attacked the pedestrian several dozen meters from the bus.

His family denied the claims, and said he had no interest in politics, "this was traffic accident which sealed his fate," a relative told Ynet.

The wounded were taken to Hadassah University Hospital, Mount Scopus.

Jerusalem Mayor Nir Barkat praised the security forces for their speedy response, saying the terrorist had not gone more than 100 meters before he was stopped. But he also called for citizens to behave responsibly in such tense times.

"No one should take the law into their own hands, and anyone who does so should be prosecuted to the fullest extent of the law," the Jerusalem mayor said. 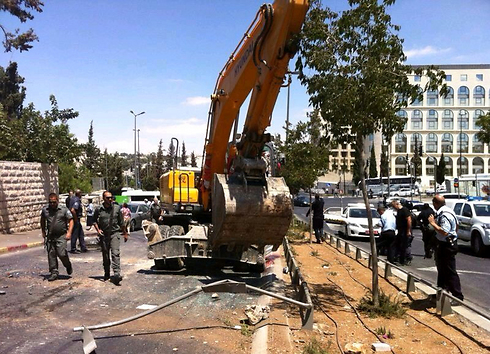 Scene of terror attack in Jerusalem

Motti, an eye witness, said, "I went outside and suddenly heard a large boom, and saw a bus upside down, and then heard two or three gunshots and someone jumping on the driver, so we understood they had killed him. We thought someone had blown something up, so we left the area. There was chaos."

Interior Security Minister Yitzhak Aharonovich said he did not rule out the possibility that additional such attacks would take place. Praising the police for their alertness, Aharonovich said "The police identified him and the threat and responded quickly - the result is clear."

Nonetheless, the minister sought to downplay the attack, calling it "insignificant." 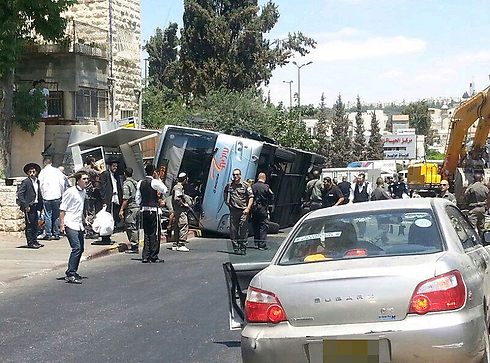 The attack comes amid already spiraling tensions in the capital city. Clashes at the Temple Mount in the Old City erupted earlier in the day, when masked Arab youths threw stones and fireworks at police forces at the Mughrabi Bridge when the compound opened for visitors.

Last week Hamas Spokesman Fauzi Barhum called for exactly such attacks: "Do you not have cars, motorcycles, knives, clubs, diggers and trucks? If you do and do not hit Jews or settlers, and do not kill dozen of Zionists - then you are not Palestinian."

The attack is the latest in a series of incidents involving vehicles. In summer 2008, tractors were used to carry out two separate terror attacks in Jerusalem in the space of three weeks.

In 2009, a tractor plowed into a police car on Menachem Begin Boulevard in Jerusalem. The driver was apparently also trying to hit a nearby bus, but missed. Two police officers were in the car when it was hit and both sustained mild injuries. Other police officers nearby shot the terrorist.

In October 2013, a Palestinian was shot dead after he rammed a tractor through the main gate of an army base located north of Jerusalem.