Maj. Gen. Pariente says man wearing black clothes shot soldier from close range, in what seems to be second terror attack in Jerusalem in a day.

A soldier sustained serious injuries after being shot Monday near the Mount Scopus tunnels in Jerusalem, by what police assume was a Palestinian terrorist. The incident took place three hours after a man was killed and six hurt when terrorist went on rampage in industrial digger in the city.

Police Maj. Gen. Yossi Pariente said in the wake of the incident that "we are looking into this as a likely terror attack." 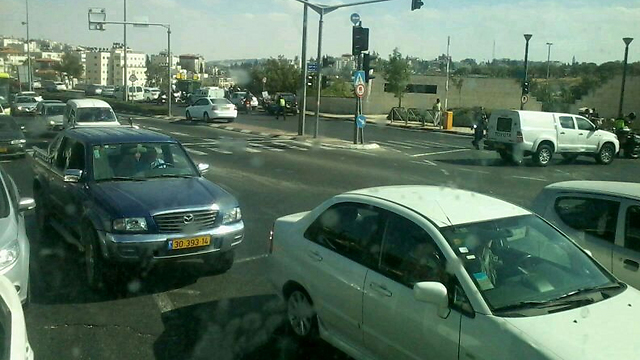 The first report of the incident came at 4:10 pm and large police and MDA forces deployed to the scene of the shooting. The spokesperson for Hadassah Medical Center said that a young man arrived at the emergency room, that his injuries were severe and that he was transferred to the operating room.

MDA paramedics said the wounded man was an Israeli in his 20's.

An eyewitness to the event said, "We heard gun fire and a motorcycle driver wearing black escaped from the area."

Pariente added that "forces arrived on the scene and saw a soldier being shot from close range by a man wearing black clothes. He fired a number of rounds and ran towards a motorcycle or Vespa that waited for him nearby. In general - he escaped towards Wadi Joz."

Pariente noted that "a security guard on location ran at the motorcycle but it escaped. We are trying to locate the motorcycle. Border Guard and elite forces are scanning the area."

Reports of a security incident at the Hebrew University's Mount Scopus campus are false, the university said in a statement. "The campus is safe and secure", they said.