Israel to UN: 'Stand with Israel and against terror before it's too late'

Israeli ambassador to the UN Ron Prosor spoke before the General Assembly in New York on Wednesday, telling the represented nations that they could either join Israel in fighting the threat of terrorism or face the same threat on their own doorstep in the near future.
UN Secretary General Ban Ki-Moon (Video: Reuters)    (צילום: רויטרס)
X

The UN chief did not specifically criticize any one side of the conflict, but did say that, "The massive death and destruction in Gaza have shocked and shamed the world. This ceasefire has come at a price that is almost too much to bear." 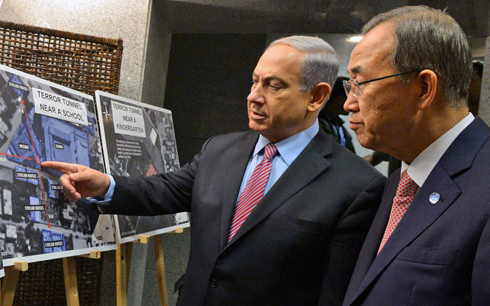 Ban particularly expressed his disappointment that UN structures had come under fire, though in several cases it has yet to been conclusively decided who was responsible for the attacks.

"Perhaps nothing symbolized more the horror that was unleashed on the people of Gaza than the repeated shelling of UN facilities harboring civilians who had been explicitly told to seek a safe haven there," said Ban. "These attacks were outrageous, unacceptable, and unjustifiable.

The overall tone of Ban's words expressed his desire to reach a permanent diplomatic solution in the region to end the fighting what has been renewed every few years in Gaza over the last decade.

"The senseless cycle of suffering in Gaza and the West Bank, as well as in Israel must end," said Ban. "They must go back to negotiating table. We must not repeat this way periodically."

"We must spare no effort to turn the current calm into a durable cease-fire that addresses the underlying issues of the conflict: Ending rocket fire from Gaza, weapons smuggling, opening the (Gaza) crossings, lifting the blockade and bringing Gaza back under one Palestinian government that accepts and adheres to the PLO commitments," he said.

Those commitments include the right of the state of Israel to exist which Hamas has refused to recognize.

UN human rights chief Navi Pillay told the assembly that "any attacks in violation of these principles, on civilians, homes, schools and hospitals, must be condemned, and may amount to war crimes."

She told the assembly by videoconference that the casualty toll in this conflict - nearly 1,900 Palestinians, the vast majority civilians, and 64 Israeli soldiers and three civilians - has superseded Israeli military operations in 2008-2009.

Pillay stressed that there has been no accountability for the conflicts in 2008-2009 and in 2012, but she said the Commission of Inquiry established last month by the UN Human Rights Council "will help to establish clarity regarding acts committed by all parties, thus beginning to address accountability issues related to the current hostilities in Gaza, as well as to the West Ban including East Jerusalem."

Its report will be presented in March 2015 and "should be carefully considered and followed with appropriate action," she said.

A senior source from within the Foreign Ministry told Ynet Wednesday that Israel should refuse to cooperate with any international investigations into alleged Israeli war crimes during Operation Protective Edge, on the grounds that the UN inquiry committee is comprised of biased nations that will vote against Israel no matter what the findings.

In 2009 the Israeli government refused to cooperate with the Goldstone inquiries and the source in the Foreign Ministry told Ynet that the purpose of doing so is to reduce political damage to Israel as much as possible.

Ynetnews and Reuters contributed to this report