In-depth: Terror tunnels and the trap they pose

Although history of war is replete with the use of tunnels, from ancient times to Vietnam, Gaza's complex system of 'terror tunnels' symbolized the present Gaza war, and could hold key to future fighting.

“One hundred Israeli schoolchildren killed in Hamas attack” - Israelis say this would have been just one of many similar headlines announcing mass killings and untold loss of civilian life had Operation Protective Edge not been launched.

Protective Edge is the army’s designation for the ground invasion of the Gaza Strip launched July 8, the goal of which was to silence the seemingly endless barrages of Palestinian rockets aimed at Israeli cities and towns; and to detect and destroy the vast network of underground tunnels dug beneath Gaza and into Israel by the Islamist Hamas organization.

The Tunnel Trap   (The Media Line)

As details of the tunnel system are made public, Israelis are at once fascinated and infuriated to learn specifics of the intricate Trojan-horse-like network lurking beneath their own communities filled with Hamas fighters waiting to strike; an engineering feat so lethal that the national patter is obsessed with unsubstantiated tales of nefarious battle plans for the execution of “an Israeli 9/11.” 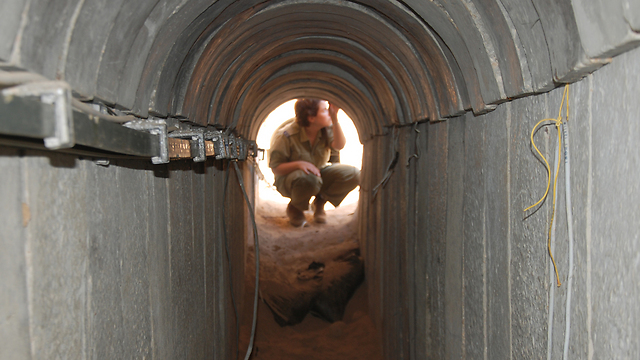 Frequently heard are comments like, “Surely the hi-tech nation should have the ability to detect tunnels!” while others ask how such an elaborate feat of engineering and construction could have proceeded right under the noses of the military and a security-savvy populous experienced in counter-terrorism? Nothing short of shocking, Protective Edge has revealed that the tunnels not only transverse the Gaza Strip, but a number of them continue beneath the border and exit inside Israeli territory and even within the perimeters of some communities.

In October 2013, Israeli army (IDF) intelligence located entrances to one such tunnel just a couple of hundred meters from the entrance to Kibbutz Ein Hashlosha, a collective community in southern Israel near the border with Gaza. Standing at ground level, one sees the tunnel split in the middle, its branches extending deep into the earth, with one entrance/exit almost a mile away – through Israeli territory and into the Gaza Strip – and the other a mere 600 meters (2000 feet) to the right: sitting on Israeli land. 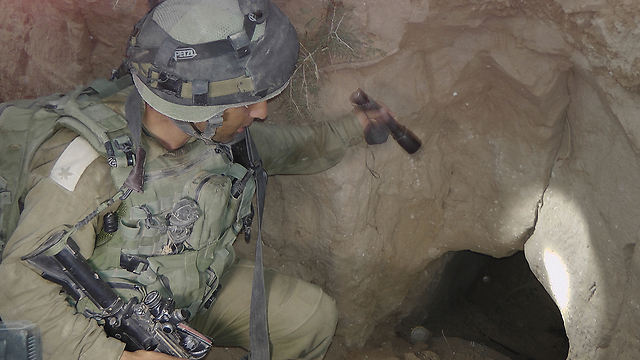 Moving closer, it required maneuvering through a steep downward 46-foot trek assisted by the steadying hand of an IDF officer to navigate the distance from the surface to the underground passageway itself.

Crawling through the deceptively small opening and out of the desert’s summer heat and humidity into the coolness of a subterranean concrete-lined structure, it was surprising to find myself standing erect and able to see far enough to sense distance – and lots of it.

Though visibility is limited by the dearth of ambient light and helped only slightly by the lighting unit attached to our camera, the vast dimension of the expanse was perceptible; the elaborate nature of the structure striking. From the sophisticated construction to the array of cables, conduits finished ceilings, communication lines and pulley systems, it made perfect sense to learn that each tunnel was estimated to have required several years and millions of dollars to build – mostly by hand with a jackhammer and shovels. 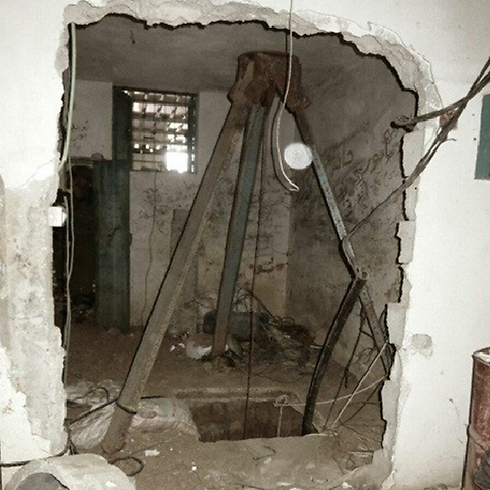 Lest there be any doubt about the tunnels’ purpose, also discovered in many tunnels were a variety of weapons, army uniforms, motorcycles and chloroform and handcuffs: A macabre “kidnapping kit.”

According to Maj. Arieh Shalicar, dozens, if not hundreds, of these tunnels, lead “from mosque-to-mosque; mosque-to-house; house-to-hospital; kindergarten-to-house: all within a mere 50 to 200 meters (150 to 650 feet). It is estimated that gunmen are able to live inside a tunnel for weeks at a time, apparently sustained by the quantities of dates and water left behind.

“Basically, a Hamas terrorist can enter one of these tunnels in civilian clothes without arms and pop up somewhere else fully clothed in an Israeli army uniform brandishing a Kalashnikov, ready to attack someone,” according to Shalicar. 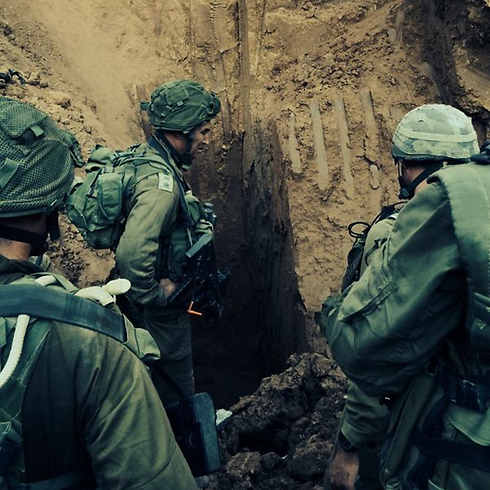 During Operation Protective Edge there were several pitched battles resulting in high numbers of casualties when terrorists staged surprise raids on Israeli troops from inside tunnels.

Tunnels not only transverse the Gaza Strip, but many – including 14 of the 32 destroyed during Protective Edge – continue beneath the border and exit inside Israeli territory and even within the perimeters of Israeli communities.

Beneath the collective sigh of relief at the network’s discovery and destruction remains more telling questions as well: Questions that will no doubt form the core of the national debate long after the tanks return to base.

“Who knew what when?” is only the first to be directed to the Netanyahu administration. Consider as well the apparently un-detected noise and dirt that accompanied construction that utilized scores of tons of cement – perhaps the most often-cited example of substances usually banned for delivery into the Gaza Strip since Israel initiated its blockade in 2007. 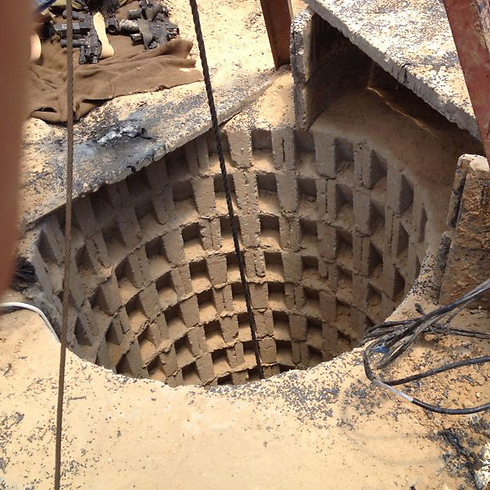 The passage of goods and people in and out of the territories is overseen by COGAT – the Coordinator of Government Activities in the Territories – which answers to the defense ministry. Its spokesman, Guy Inbar, told The Media Line that permission to bring building material into Gaza was denied following the discovery of tunnels last October. Later, those items were allowed to enter only in conjunction with requests for specific programs of the United Nations; American or European organizations.

A Gaza tunnel first figured prominently in a security scenario when terror mastermind Mahmoud Al-Mahbrouh avoided capture by Israel’s security services by escaping to Egypt through one in September 1989.

By the mid-1990’s, tunnels were first dug for small children to crawl through in order to smuggle cigarettes. Tunnels quickly became more prolific, a virtual economy growing up in the Gaza Strip in order to sidestep the Israel blockade. In addition to ammunition and other military hardware, almost anything could be obtained through the tunnels.

But in the past five to six years, tunnels became more sophisticated and complex, designed specifically to serve as staging platforms for terror-related activities.

During the past year, four tunnels crossing from Gaza into Israel were located and “de-commissioned” – at which point the army created a task force to deal with the increasingly dangerous situation.

It was at the start of the Second Intifada – the period of unbridled violence between 2000 and 2006 that was typified by bus and suicide bombings – that tunnels came into regular use as ways of getting past Israeli border fences and reaching army positions.

More than a decade later, the burning question the defense ministry is still struggling with is how to find the solution to detecting tunnels. According to the daily newspaper Haaretz, by 2001 more than 100 proposals had already been submitted to the ministry’s Administration for the Development of Weapons and Technological Infrastructure.

As yet, no reliable technology has been developed that can both cover a wide area and see a man-sized tunnel to a depth of more than a few meters underground, according to Dr. Eado Hecht, a defense analyst for the Begin-Sadat Center in Jerusalem.

The tunnels dug by Hamas are usually about 20 meters (66 feet) underground – so, even if you know the approximate location, they are almost impossible to detect and out of range of existing tunnel-location technology. Therefore, Israel’s options are to either rely on its excellent intelligence or conduct house-to-house searches.

Hecht explains that destroying a tunnel is a lengthy and complex operation. Just blowing up the entrance or some of the airshafts leaves most of the tunnel intact, so Hamas sappers will be able to quickly dig by-pass sections and continue to use the tunnel. Therefore, the entire length of the tunnel and its branches must be located, mapped and then completely destroyed.

Amir Rappaport, editor-in-chief of Israel Defense magazine told The Media Line that, “The Israeli Defense Forces have put a lot of effort into finding solutions; so far they have a combination of a few imperfect solutions based on a lot of intelligence and other aspects to find tunnels.” Rappaport said they are between one to two years away from the most promising answer which entails sensors in the ground.

Although the history of war is replete with the use of tunnels from ancient times to Vietnam, this is the first time an army is seeking a technological solution to this sort of threat. And when it’s found, says Rappaport, it will come with major commercial potential, for example in the United States, where it would be ideal for dealing with the issue of immigration along the Mexican border.

For the moment, Israelis are focused on just how many tunnels the army located and destroyed during Operation Protective Edge; how many remain undiscovered; and of course, how to prevent them from being reactivated.

It is that uncertainty that prompts some, such as Israel’s Tourism Minister Dr. Uzi Landau, a member of the Israel's Yisrael Beiteinu party and former Minister of Internal Security, to advocate for settling for nothing less than the destruction of the Islamist organization.

Landau told The Media Line that, “We have to totally dismantle the infrastructure (of Hamas), meaning both tunnels and terrorists. Hamas is not isolated – it is very much in touch with Hezbollah in Lebanon, al-Qaeda in Syria, Boko Haram in Nigeria, and Shabaab in Kenya.”

Stressing the urgency of acting quickly, not allowing Hamas time to retool, Landau points to the Islamist powerhouse Islamic State of Iraq and Greater Syria and admonishes, “If ISIS is fighting for a caliphate state (a state governed by strictest adherence to Islamic law), then Gaza will be a member of this country.”

If the ceasefire holds, retrospectives and investigations will consume the Israeli and Palestinian publics, much of the focus falling on the tunnels. In Ramallah and Gaza City, people will be asking whether 90% of the casualties (more than 1,800 died), those that came after Hamas rejected the first ceasefire offer, was a price worth paying. They will note, too, that Hamas would presumably still be in control of their tunnels had it opted for the time out.

In Jerusalem and in the south, Israelis, most of whom doubt the last has been heard from the tunnels or the rockets, are already waxing critical of the government for failing to allow the army to complete its mission when so much was spent – including an enormous cost that is still-to-be-realized in terms of image and world prestige.

Without a doubt, a good many political futures remained trapped in the tunnels.