The director-general of Sapir Academic College was wounded Friday around noon from mortar fire at the entrance to a community in the Sha'ar HaNegev Regional Council. Dr. Nachmi Paz, a 71-year-old resident of Kfar Aza, was evacuated to Soroka Medical Center in Be'er Sheva. He was transferred to the trauma ward in light-to-moderate condition. 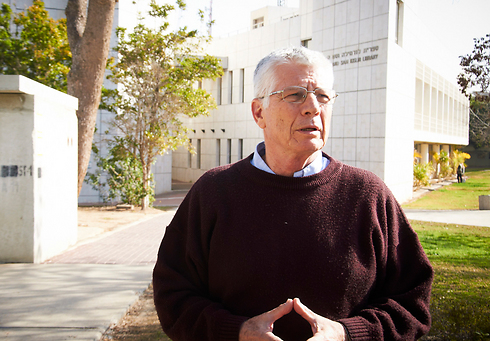 Dr. Nachmi Paz
A 20-year-old soldier was also wounded by the mortar fire in Sha'ar HeNegev – one of 35 rockets and mortars fired on Israel after a 72-hour ceasefire expired at 8 am. 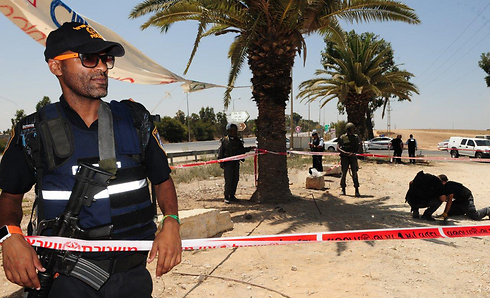 Scene of mortar fire from Gaza (Photo: Herzl Yosef)
Verda Goldstein, Paz's neighbor, said they returned to the town following the recommendations of the prime minister, IDF chief of staff, and GOC Southern Command, but the rocket fire had not ended. "What return to normalcy?" asked Goldstein. "Yesterday we returned to Kfar Aza with our families, the women and children. It was quiet and it was good. We felt everything would be alright." Goldstein noted the Homefront Command directives which had changed – and changed again since. "Before the weekend Homefront Command rushed to remove any shred of doubt. Go back to your lives, as if we achieved world peace. But we didn't." She stressed that "we once again have to be 15 seconds from a shelter. The children's trauma has only gotten worse. In the blink of an eye we were back into the emergency mentality."

Following the ceasefire, Sapir Academic College decided to begin its summer semester on Sunday. But given Hamas' decision not to extend the temporary truce, the college will reassess the situation on Saturday night.

Over the years, the college's campus sustained numerous rocket hits. Six years ago, 47-year-old Roni Yechieh, was killed by a Qassam at the college. "In the last week, Nachmi remained in Kfar Aza. We worked as usual at the college and everyone went home at the end of the day, especially the last two days, during the ceasefire," said Prof. Omri Yadlin, the president of Sapir College. He added: "Nachmi was a 'veteran soldier' – he stayed to live in the area where he was born."

Prof. Ze'ev Tzhor, a history professor who founded the Sapir Collage and was David Ben Gurion's personal secretary and is a close friend of Paz, said the Sapir College administrator stayed in Kfar Aza the entire month.

"One or two nights he slept with the kids near Ashkelon, but most of the days and nights he spent in his house. I don't know if he was scared, he had many options – his children and friends invited him – but he and his wife Shoshana were firm in their decision to stay."

Tzhor noted that "over the years his wife experienced her share of mortars – her car was damaged in the past – but they were not deterred."

Noam 'Dabul' Dvir and Shachar Hay contributed to this report.