The news came after US military aircraft conducted an airstrike on Friday against Islamic State artillery used against Kurdish forces defending the city of Arbil, Iraq, near US personnel, a Pentagon spokesman said.

White House spokesman Josh Earnest said initial US support will be on military strikes to protect American personnel working in Iraq, and to address the urgent humanitarian situation on Sinjar mountain.

But the United States also has a third goal "related to our belief and commitment to supporting integrated Iraqi security forces and Kurdish security forces as they unite the country to repel the threat" posed by Islamic State fighters, he said, reiterating that any US support will not be "prolonged" and will not involve sending U.S. troops to the country.

He said the Islamic rebels had been using the artillery to shell Kurdish forces defending Arbil where US personnel are located. "The decision to strike was made by the US Central Command commander under authorization granted him by the commander in chief," he said. Kirby said the strike occurred at 6:45 a.m. EDT, or 1:45 p.m. in Arbil (1045 GMT). 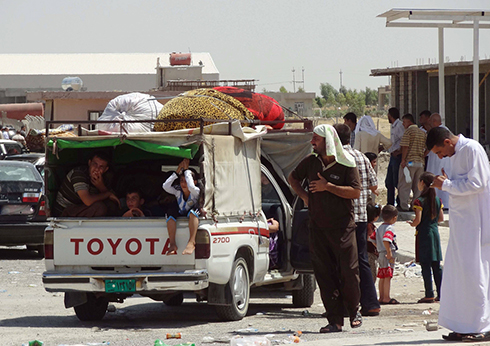 Kurds escape Erbil (Photo: AFP)
On Thursday US President Barack Obama authorized air strikes on Iraq to protect Christians and avert "a potential act of genocide" of tens of thousands of members of the ancient Yazidi sect who have taken refuge on a desert mountaintop from Islamic State forces. The United States has also begun dropping relief supplies to the refugees. Sunni fighters from the Islamic State, an al-Qaeda offshoot bent on establishing a caliphate and eradicating unbelievers, have swept through northern Iraq since June.

US troops pulled out of Iraq in 2011 after having ousted ruler Saddam Hussein eight years earlier. Obama insisted the United States would not commit ground troops.

"America is coming to help," the president said in a somber speech from the White House Thurdsay.

The Yazidis, who follow an ancient religion with ties to Zoroastrianism, fled their homes after the Islamic State group issued an ultimatum to convert to Islam, pay a religious fine, flee their homes or face death.

"Earlier this week, one Iraqi in the area cried to the world, 'There is no one coming to help.' Well, today, America is coming to help," Obama said. "We're also consulting with other countries - and the United Nations - who have called for action to address this humanitarian crisis."

The announcement reflected the deepest American engagement in Iraq since US troops withdrew in late 2011 after nearly a decade of war. Obama, who made his remarks in a steady and somber tone, has staked much of his legacy as president on ending what he once called the "dumb war" in Iraq.

Mindful of the public's aversion to another lengthy war, Obama acknowledged that the prospect of a new round of US military action would be a cause for concern among many Americans. He vowed anew not to put American combat troops back on the ground in Iraq and said there was no US military solution to the crisis.

"As commander in chief, I will not allow the United States to be dragged into fighting another war in Iraq," Obama said.

Even so, he outlined a rationale for airstrikes if the Islamic State militants advance on American troops in the northern city of Arbil and the US consulate there in the Kurdish region of Iraq.

The troops were sent to Iraq earlier this year as part of the White House response to the extremist group's swift movement across the border with Syria and into Iraq.

"When the lives of American citizens are at risk, we will take action," Obama said. "That's my responsibility as commander in chief."

He said he had also authorized the use of targeted military strikes if necessary to help the Iraqi security forces protect civilians.