Combating the rockets with art

South's children draw what makes them feel good to deal with the trauma of a summer under rocket threat.

"I don't like the booms or the Code Red, it interrupts me when I'm playing," 6.5-year-old Sagi Arussi explains with a serious expression on his face as he clutches to his drawing of a boy who eats and sleeps next to a tree. When he's asked why he chose to draw that, he says: "I want the noise to stop, to have a vacation and for us to be able to play outside, go places or sit at home to eat peacefully, the things I love."

Sagi, who will be starting the second grade at the end of the summer vacation, said that lately "there were good days and not good days. Part of the time I slept in the safe room or bomb shelter, one week I was at the Kinneret because I couldn't sleep at night anymore with the booms. But in the end I got used to it and we went home." 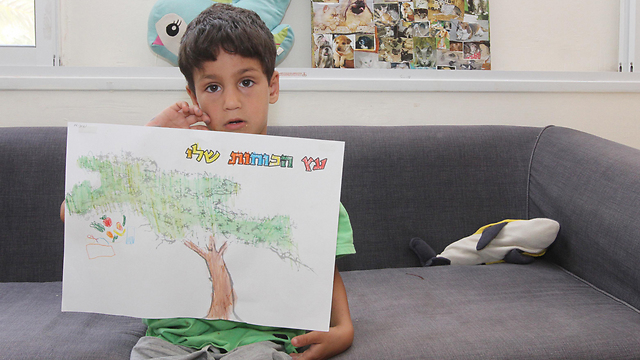 Sagi Arussi (Photo: Ido Erez)
At the Eshkol Regional Council, where rockets continue falling even after the ceasefire, the children of the Beit Dror community center in kibbutz Re'im are waiting for the summer vacation to start in earnest. Adi Gabay, the head of education in the kibbutz, told us about the day-to-day routine of war. "During a part of the operation we were with only 10 children out of 40 in the young group and it's not so nice to see the kindergartens closed." 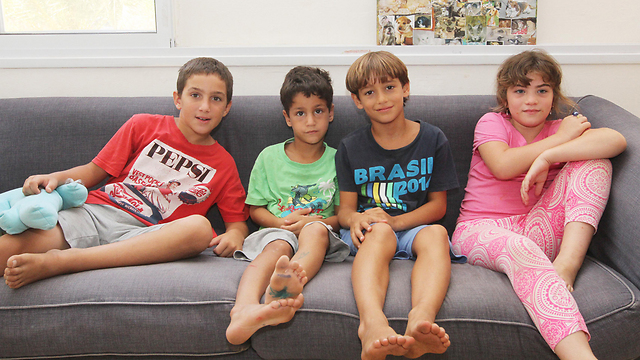 The kids of Beit Dror in Re'im (Photo: Ido Erez)
In the past few days, residents who left because of the incessant rocket fire started returning to their homes, "after they were gone the entire time because not all homes here have safe rooms." To help the kibbutz's children, the community center's staff have asked the kids to draw 'My Tree of Strength' - each child colored the tree and next to it drew the things he or she loves, and that help him or her deal and be strong - a complicated matter in a kibbutz placed in the line of fire and is under rocket and terror tunnel threat.

Emmas Kpostianski, who says she's "almost eight and almost starting the third grade," showcased her tree with pride. Next to the tree she wrote "To sing, to dance and to draw." 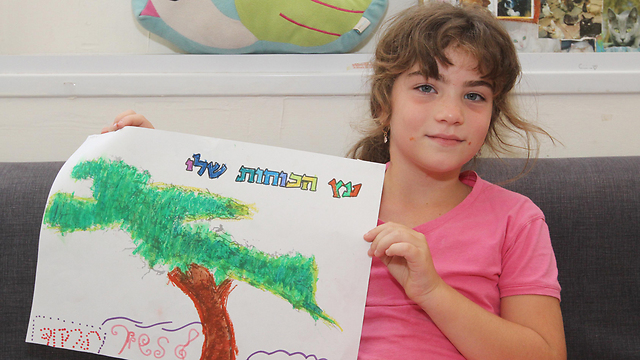 She explains that "this is what I love. My mom is an artist and I want to be one too, and besides I sing and listen to music. It calms me down and helps me get through the booms."

"I want everything to go back to normal already and I want to be at music school," Emma adds. When asked how her summer break is going, she says, "so-so. I was here and there, went and came back, but mostly stayed here. I was a bit stressed because of the noises. We couldn't go outside, and friends and family couldn't come over." She goes on to explain that "it's a little bit difficult to differentiate our booms and their Code Red, so it's confusing. It's scary not to make it - if you're in the shower or in the bathroom and you don't have 15 seconds."

Hanni Daniel, one of the kibbutz residents who teaches the children, explains that the activities and drawing of the trees are meant to help the kids talk about what makes them feel good. 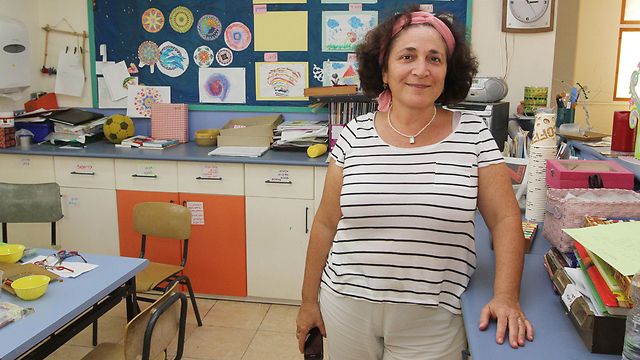 "The years under threat caused an accumulative damage with some of the children - (that are manifested) in their sensitivity, in their fears and in some forms of regression. And there are still kids who went out to play while the booms were heard. Most of the time, you hear how important home and family are to them," she said.

Liam Or Nasser, nine-years-old, drew a soccer ball near his tree because "this is how I forget about the situation. I want it to be over already because it's been going on for over a month and I'm sick of hearing how it fell here or there." 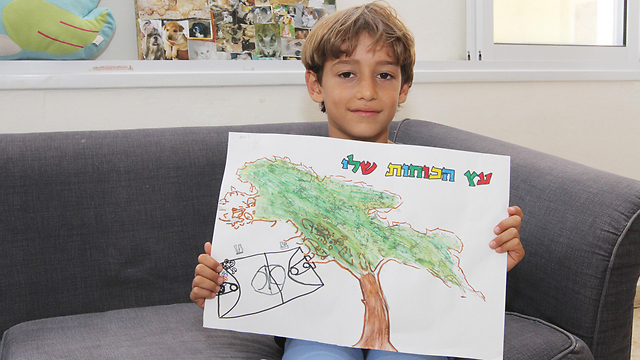 Liam Or Nasser (Photo: Ido Erez)
On his summer vacation, he says: "We went to a lot of places and we were here as well. We wanted to go back when the booms calm down but they continued for a long time." "Booms are not fun but I'm starting to get used to it. One time, our house really shook and then we couldn't take it anymore and we went far away," he continues. "Another time we were playing outside, a lot of kids, and there was Code Red so we ran to the bomb shelter and it was scary. The problem is you're not ready for this and it can happen all the time." The head of education, Adi Gabay, talked about the differences between children and adults. "Adults' greatest fear is the tunnels, this is a constant anxiety that you can't deal with as an adult, let alone when you're a child. That's why we are trying to screen the information that gets to the children, and whoever asks we explain that the soldiers are protecting us and there are some kids who explain that this is a tunnel that just comes out of the kibbutz," she said. The children, Gabay said, are mostly afraid of the "booms," most of which originate in IDF activities in the area. "These are inhuman decibels, a nightmare. Children were very frightened, some even walked around with earplugs." For some, their regression manifested in the fear of going to sleep, in unquiet sleep and in panic whenever loud noises were heard. Nine-year-old Amit Gabay told of his unusual routine during the summer vacation: "Most of the time I was here, and some of the time I was visiting grandma and grandpa in Na'ale (in the West Bank). There were many soldiers here and that calmed me down. But the vacation sucked because we had to run to the bomb-shelter or safe room all the time." 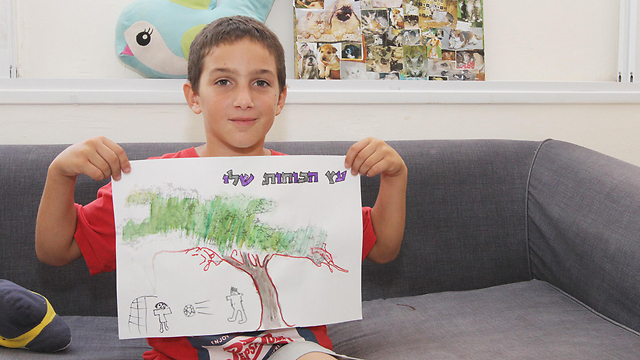 Amit, like the other kids, doesn't think of something innocent when he hears the Code Red siren.

"There were a lot of Code Reds too, and a lot of booms and I hate it because you have to stop playing." Next to his tree he drew a soccer game because: "It's the most fun to run outside, but it's not always possible. I hope there will be peace because wars are not fun. I want to live normally."

'A slap full of love'

And more on drawings - over the days of fighting, members of the Jerusalem art collective "HaMabul" held a comics workshop for the kids of the south who had to give up their summer holiday for long stays in safe rooms.

One of the drawings that was noteworthy both because of its originality and because of its level of accuracy was by 11-years-old Ohad from Sderot, who left the members of "HaMabul" in shock. 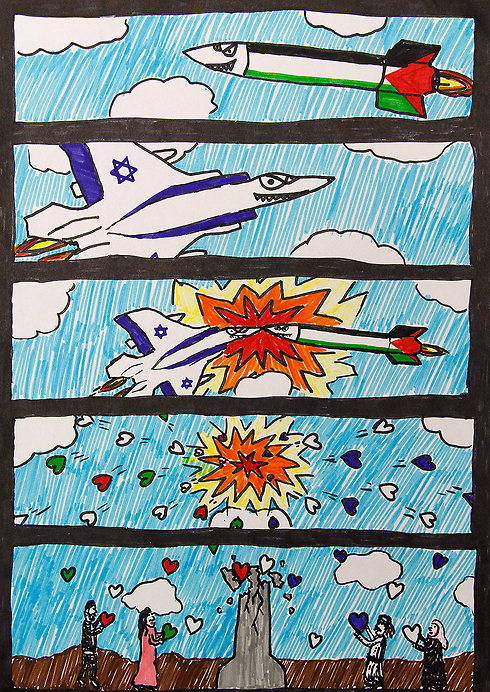 Eeleven-year-old Ohad from Sderot's drawing (Photo: HaMabul collective)
"We got a slap full of love," Matan Pinkas, one of the members of the collective, said.

"At first we were worried that the moment we gave the children a place of self expression, a lot of poison, fear and hatred would come up, but Ohad's drawing assured us this won't be the case. We realized the children see reality just as well as we do, and even in a purer manner. Ohad gave us his drawing as a gift and before we left, told us that 'I'm sure the kids in Gaza could also be my friends and we could draw together.'"

Itay Blumental contributed to this report.