New satellite pictures revealed Tuesday the widespread destruction in Gaza following IDF Operation Protective Edge. Turkish news agency Anadolu released the pictures from the GOKTURK-2 satellite, captured at the beginning of the year and again on August 10 – after a month of fighting in the coastal territory. According to the UN, at least 11,855 housing units were destroyed or severely damaged in Gaza, with 425,000 Palestinians internally displaced by the latest round of hostilities. Palestinians claimed that 134 factories were destroyed in the operation, directly resulting in $47 million of damages and leaving 30,000 people out of work; the unemployment rate in the Gaza Strip was reportedly up to 55 percent.
Before and after in Gaza
X

Before and after in Gaza

According to the latest estimates, some 16,700 homes were destroyed or significantly damaged, leaving as many as 100,000 people without shelter. Palestinians in Gaza expressed concern over the start of the new school year, claiming that 25 schools were destroyed and 230 require repair. 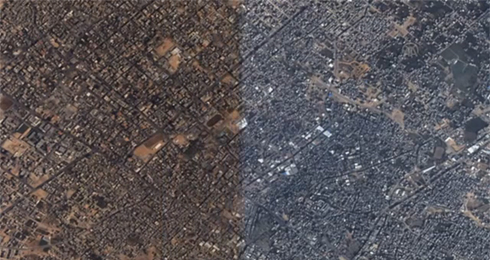 Before and after photo of Gaza
"In order for us to say how many houses, how many schools and how many communities have been destroyed we have got to get engineers in place, but until there's proper security we can't send engineers out into the field," he told the MailOnline. He stressed: "People leaving our schools are going to see their homes, and then they're coming back, that suggests that their homes are uninhabitable." The UN refugee agency's spokesman expressed grave concern about the immediate future of the Strip's residents. "There are probably bodies under the rubble. People, if they can get back to their homes, will probably find their water systems and sewage systems destroyed."

" I don't know how we are going to start the school year," he emphasized.

Attila Somfalvi and Elior Levy contributed to this report.