Gaza war has "delayed" the next Israeli aggression
Photo: AFP

Nasrallah: No red lines in Hezbollah's security war with Israel

"There are no red lines in Hezbollah's security war with Israel," the leader of the Lebanon-based organization Hassan Nasrallah said in a special interview published Thursday by the Lebanese newspaper Al-Akhbar. In the interview, Nasrallah discussed a variety of topics, including the Second Lebanon War, the head of Hezbollah's military wing Imad Mughniyeh, and his personal daily life which he says is led "outside the bunker".

"The Israelis promote a certain idea, assisted by Arab media, which says that I live in a bunker, sheltered from people. (Apparently) I don't see or talk to anyone and I’m even secluded from my brothers. But I do not live in a bunker," Nasrallah told the Al-Akhbar daily, when questioned if he knows how Dahieh, a predominately Shia Muslim suburb south of Beirut, has changed since 2006. 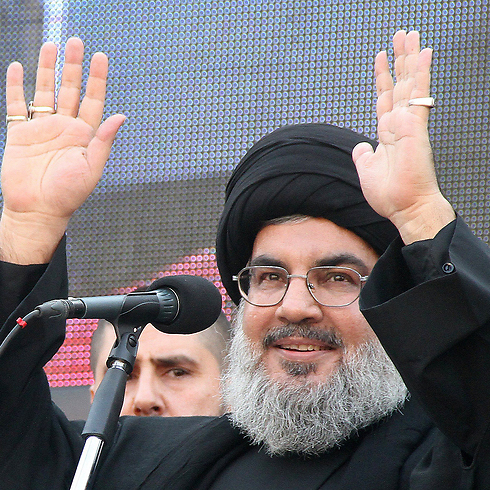 Hezbollah 's leader, Hassan Nasrallah. "I do not live in a bunker" (Photo: AFP)

"Security measures mean secrecy of movement. However, this does not totally prevent me from moving around and looking and seeing what is happening," he added, although stating at the same time that he had not driven a car "since 1986."

In the interview, Nasrallah also claimed that Israel had killed the Syrian general Mohammad Suleiman due to his role in the Second Lebanon War. Suleiman was gunned down in 2008 while he was at the beach near the Syrian city of Tartous.

According to WikiLeaks documents, Suleiman had served as a contact between the Syrian regime and Hezbollah and was responsible for the procurement of weapons. Syria, the documents claim, was in no hurry to accuse Israel, even though it knew that the country was responsible for his assassination, against the backdrop of peace talks that were held between the two sides at the time. Commenting on Operation Protective Edge, Nasrallah said that the Gaza war has "delayed" the next Israeli aggression against Lebanon, the Daily Star cited him as saying in the interview. He added, however, that he "cannot say much because it is not clear under what conditions or data can Israel wage a war, if it wants to." “The resistance (Hamas) in Gaza is entitled to achieve a real victory,” the Daily Star further quoted Nasrallah as saying in the Al-Akhbar interview. “Since the war has been imposed on it, it’s the resistance’s chance to lift the (Gaza) siege,” he added. “That’s why the resistance is looking for a real achievement solution: lifting the siege.”

Commenting on additional security issues, Nasrallah stated that "what we have prepared for Israel has not been affected at all by any of what we are doing in Syria,” NOW Lebanon quoted him as telling Al-Akhbar. "That has not affected our plans and our weapons for confronting the Zionists,” he added.

Nasrallah stressed during the interview that Israel “is an illegal entity and is a longstanding threat to the region,” the Daily Star reported.

“We cannot live with this threat,” he said. “This is why the ultimate goal for this (region) is to eliminate (Israel).”

The Hezbollah leader made similar marks in July, when he stated that "the Palestinians in the Gaza Strip have "won in terms of resistance" against Israel. Nasrallah called Israel a "terrorist state," comparing Operation Protective Edge to the 2008 Operation Cast Lead in Gaza and the 2006 Second Lebanon war. "Both in 2006 and in 2008, the goal was to mislead, and bring to a breaking point and surrender." Despite that, he said, "in 2006 and 2008 the results were different."

"We can understand what the people of Gaza are feeling because we've been through it too," he added.

Drawing another comparison, between the kidnapping and murder of Israeli teens Naftali Frenkel, Gil-Ad Shaer and Eyal Yifrach and the kidnapping of IDF soldiers Ehud Goldwasser and Eldad Regev, Nasrallah said that "much like 2006, Israel thought it had a golden opportunity to start a war against Gaza."