British Jews have responded furiously to criticism of Israel over the conflict in Gaza, calling it one-sided and pulling funding for a theatre that cancelled the UK Jewish Film Festival due to its sponsorship by the Israeli government.

Leading British Jewish businessman and philanthropist Sir Trevor Chinn is ending his "four-figure" funding for the Tricycle Theatre in Kilburn, London, after it refused to host the festival, the Jewish News reported. The report says that other Jewish donors have made the same decision. “We are as a community under pressure from the boycott movement. We can’t accept boycotts and whenever one comes along we have to fight it," the report quoted Sir Trevor as saying. 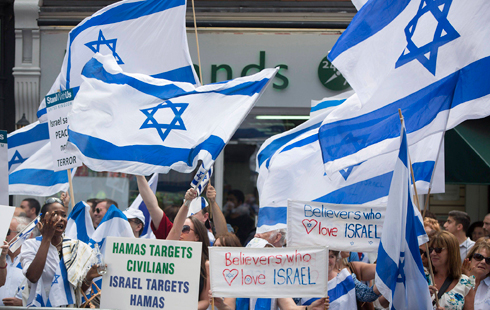 Pro-Israel demonstration in London (Photo: Reuters)
Sir Trevor is a devout supporter of Israel and leading member of the British Jewish community. He is a president of the Joint Israel Appeal and Vice President of the Jewish Leadership Council, British Jewry's umbrella organization. He received his knighthood for his charity work. According to the report, Sir Trevor met with the theatre's artistic director Indhu Rubasingham two weeks ago, after Tricycle announced its decision, and made it “absolutely clear” that the theatre would lose Jewish funding over the decision.

“The Tricycle is going to lose a lot of audience members and a lot of financial support,” Sir Trevor was quoted as saying. He also said that other “substantial supporters” had said that they would also cut their funding.

“It’s a tragedy because this is a theatre that needs and, in the ordinary course, deserves support,” he said.

Businesswoman and philanthropist Celia Atkin has also decided to end her sponsorship of the theatre, the report said. 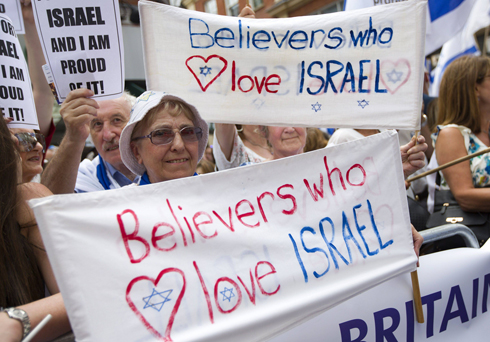 Rally in London in support of Israel (Photo: AFP)
British Culture Secretary Sajid Javid wrote to festival chair Stephen Margolis that the Tricycle Theatre's boycott was "misguided", the Jewish Chronicle reported. According to the Chronicle, philanthropist Allan Morgenthau has resigned from the Tricycle's development committee and pulled the donations from the Diana and Allan Morgenthau Charitable Trust. The report quoted Morgenthau as saying that, "I was totally and utterly surprised by what the Tricycle did. It's a terribly misplaced decision. I don't think there was malice intended but the Tricycle must be judged by its deed. He said, however, that "If they change their mind, the Jewish community will forgive them. It's very, very sad." 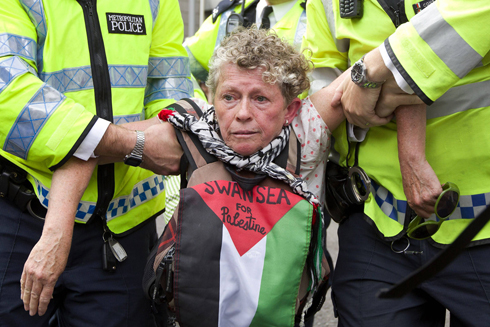 Police holding a pro-Palestinian demonstrator outside the Israeli embassy in London (Photo: AFP)
Meanwhile, Jewish members of the British Association of Social Workers have responded furiously to a statement by the union condemning Israel for the Gaza conflict.

"The British Association of Social Workers joins with our IFSW colleagues in being appalled by Israel’s attacks on Gaza and its ongoing illegal occupation of Palestinian land," said the statement released last week.

"While we condemn all indiscriminate attacks on civilians, the scale of the actions of the Israeli government forces, especially the shelling of UNWRA schools and the killing of children while they sleep, in supposedly safe places, is grossly disproportionate. We are appalled by the many violations of human rights that are taking place in Gaza, leading to ever-rising numbers of deaths and serious injuries, particularly among the civilian population. We condemn Israel’s attacks on people’s homes, hospitals and even on children while they play on the beach.

"We call for an end to Israel’s aggression, a lifting of the blockade of Gaza and the end of Israel’s occupation of Palestinian territories."

The statement, which makes no mention of rocket fire on the Israeli civilian population by Gaza's terrorist groups, was accompanied by an image of destruction in Gaza. 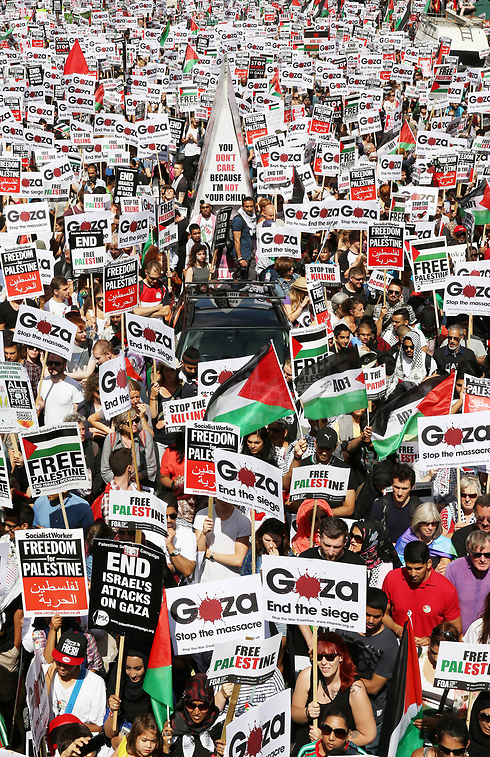 “I’m horrified. The BASW has dishonored its own code of ethics,” London social worker Karin Ward told the Jewish News.

She called the union's statement “distressing, manipulative, inflammatory, one-sided and disturbing.” BASW should be held accountable, she said. “I feel like I’m in hiding,” said Ward, whose teenage son is serving in the IDF. “It really is a careless misuse of power.”