In pictures: A black and white tour of old Tel Aviv

Blogger Shai Rajoan, 25, has made it his mission to preserve Israeli metropolis in pictures and has a lot to say about the way we treat our own history. 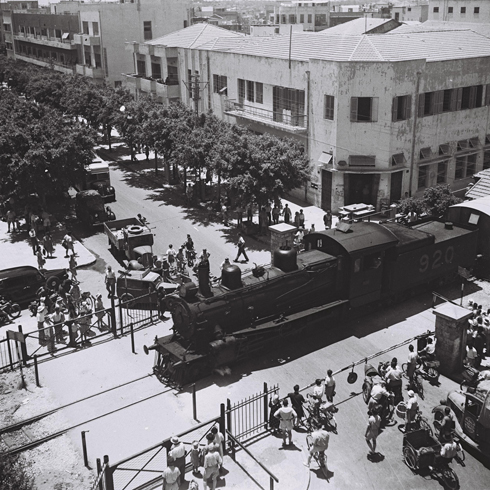 The train arriving from Jaffa on its way to Jerusalem. The picture shows the train crossing Allenby Street and entering Yehuda Halevi Street. On the right hand side stands the first post office (after the Telegraph House), which was built by city architect Yehuda Magidovitch (Photo: Zoltan Kluger, GPO) 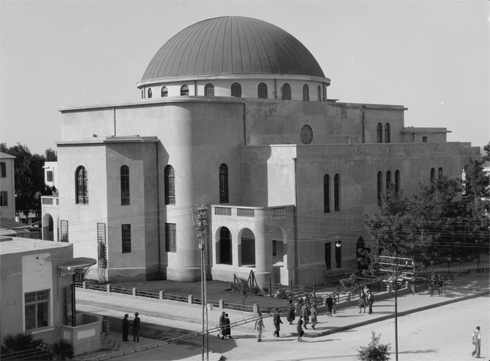 The Great Synagogue on 110 Allenby Street, corner of 23 Ahad Ha'am Street, immediately after its construction was completed (Photo: The G. Eric and Edith Matson Photograph Collection, Library of Congress) 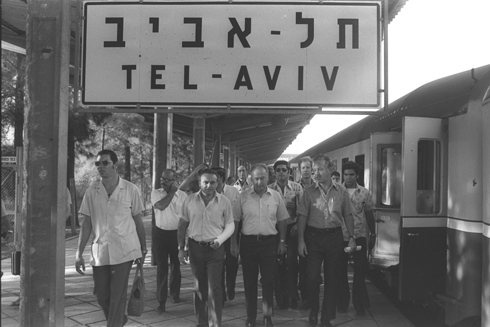 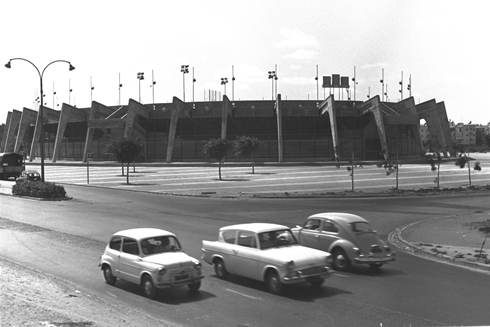 Yad Eliyahu Sports Arena, a year after its construction. At first, the arena was built as an open field without a roof, as part of a sports complex which also included the Galit swimming pool. The field, which was inaugurated on September 17, 1963, offered 5,000 seats on concrete balconies. In the end the 1960s, it underwent a complete renovation and was basically rebuilt according to the design of architect Zev Porat and engineer Asher Milstein, with 5,000 additional seats. The structure was also covered with a metal roof, which turned it into the first indoor basketball court in Israel (Photo: Fritz Cohen, GPO) 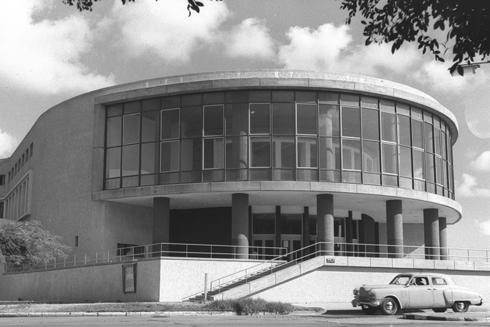 Habima Theater in its second version. Architects Dov Karmi and Zvi Meltzer added the balconies hanging between its pillars and the staircase leading to the raised entrance (Photo: Moshe Frieden, GPO) 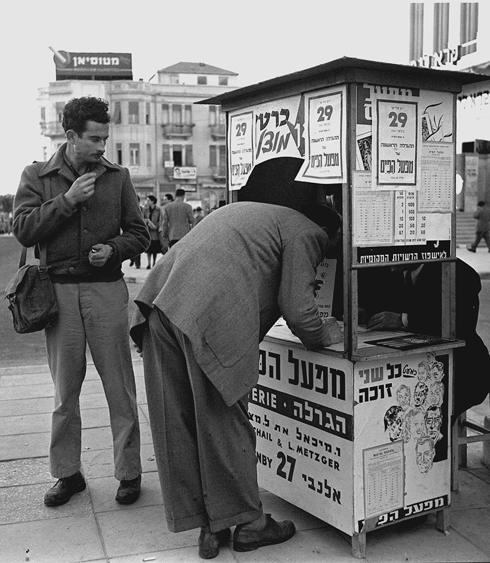 At the Mifal Hapayis station on November 2 Square, ahead of its very first lottery. The first raffle was held on January 29, 1952 (Photo: David Eldan, GPO) 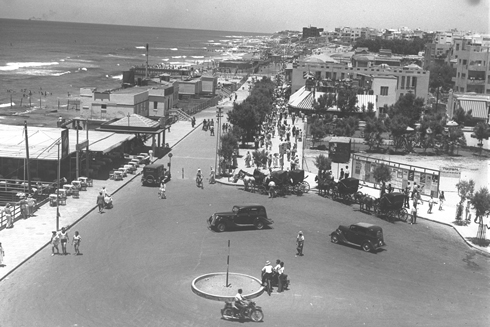 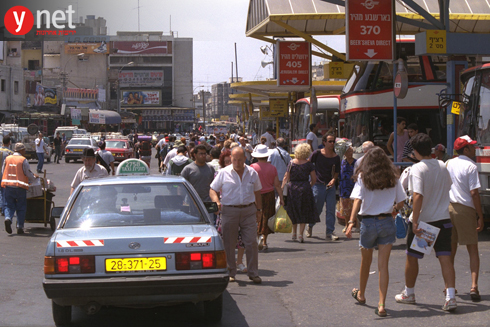 The old central bus station. "Cinema Central" can be seen on the left, and on the right is the double-decker bus which used to travel to Jerusalem (Photo: Ziv Koren, GPO) 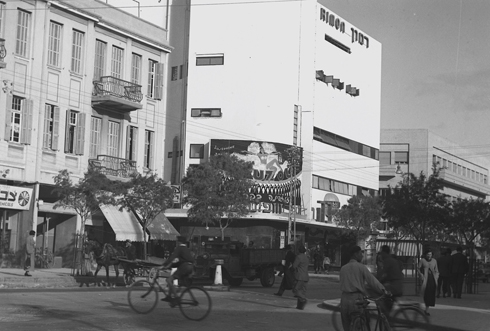 Rimon Cinema (which will later be called Allenby Cinema and the Allenby 58 Club). A poster outside the cinema promotes the performance of Josephine Baker, An American-born French singer and dancer who became famous for her struggle against the Nazi regime (Photo: GPO) 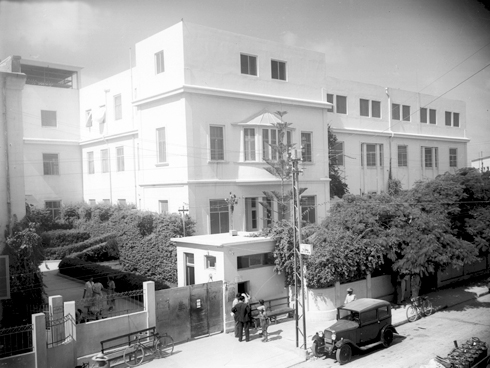 The Hadassah Hospital or, in its last official name, the Israel Rokach Municipal-Governmental Hospital. The medical institution operated in Tel Aviv from 1918 to 1992. It changed its geographical location several times throughout the years, but in most of 74 years it could be found on 8 Balfour Street (Photo: Zoltan Kluger, GPO) 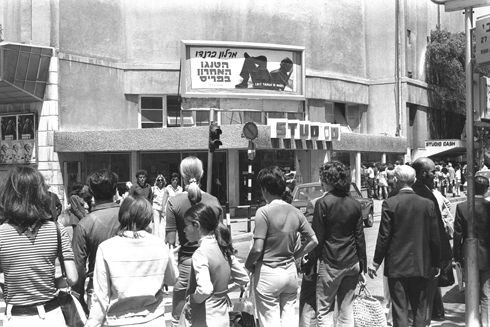 Studio Cinema, part of the historic Mugrabi Cinema. The poster outside the cinema promotes the 1972 romantic-erotic drama "Last Tango in Paris," which was directed by Bernardo Bertolucci and starred Marlon Brando and Maria Schneider. The film's blatant nudity and sex scenes led to international controversy and it was subject to various levels of censorship in many countries (Photo: Moshe Milner, GPO) 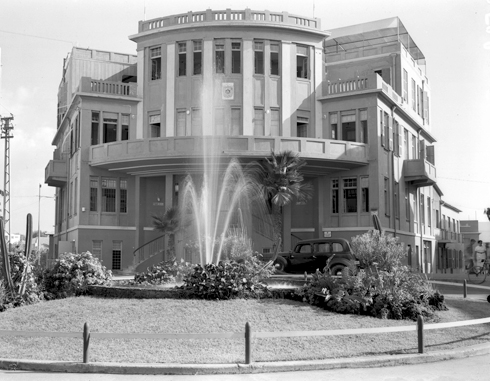 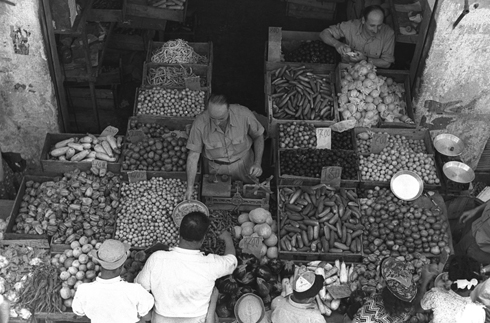 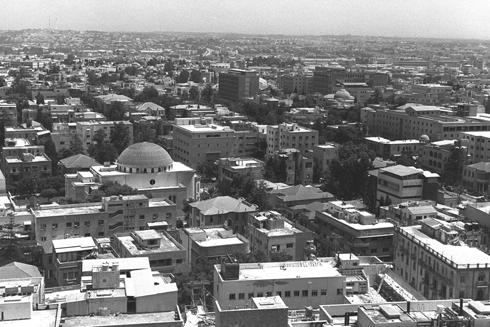 Partial view of Tel Aviv from Shalom Meir Tower, during its construction. The Great Synagogue can be seen in the center, the Ohel Moed Synagogue on the right and the dome of the Ginosar Hotel (Photo: Moshe Frieden, GPO). 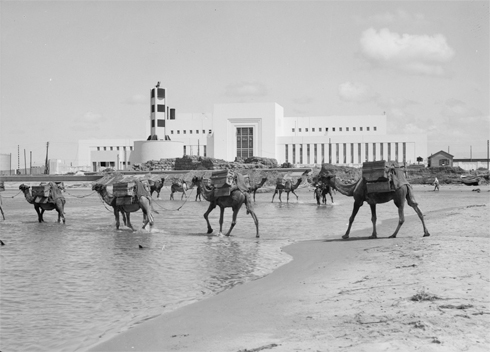 Camelcades carrying sand mixed with seashells in Tel Kudadi. The goal was to build the Reading Power Station in the background. The Yarkon River estuary can be seen in the front (Photo: Eric Matson, Library of Congress) 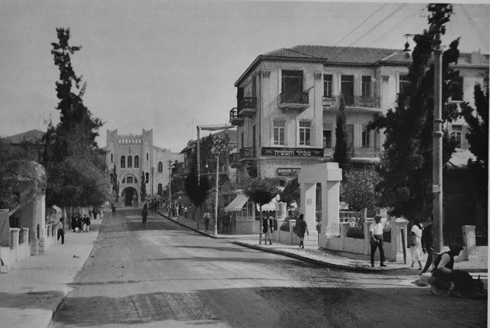 Herzl Street. Shlush House is seen on the right. The triumphal arches built ahead of Baron de Rothschild's visit can be seen on the right and left. The Herzliya Hebrew Gymnasium is seen in the background. 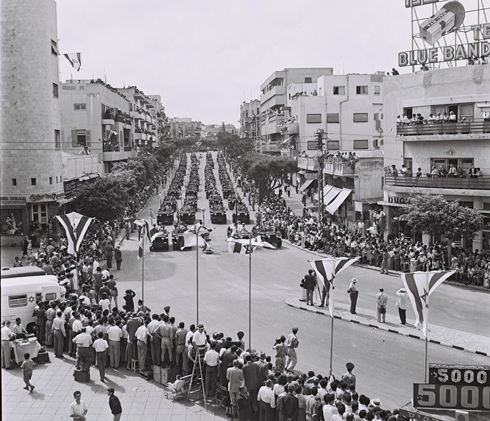 Saturday morning – what a beautiful day, 1947 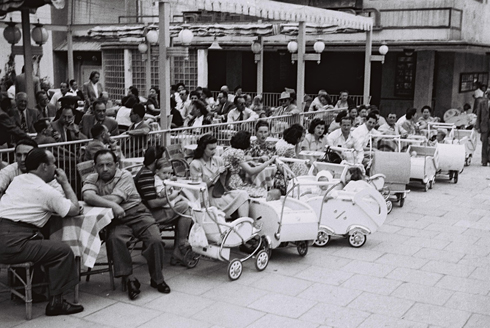 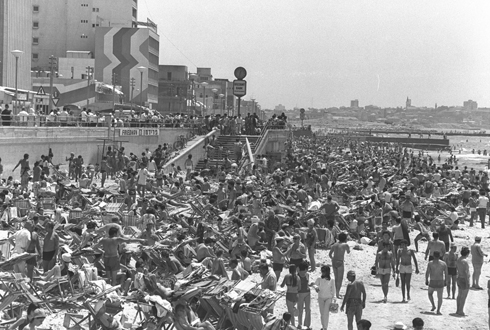 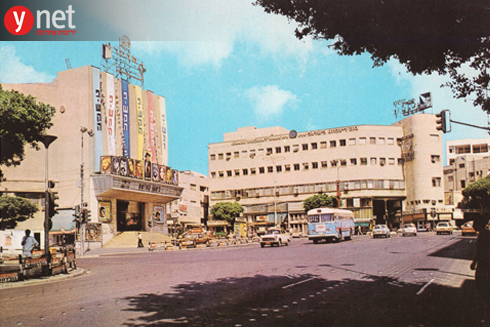 A look at November 2 Square. Mugrabi Cinema can be seen on the right and Landau House in the center, as well as an ad for Dubek cigarettes. 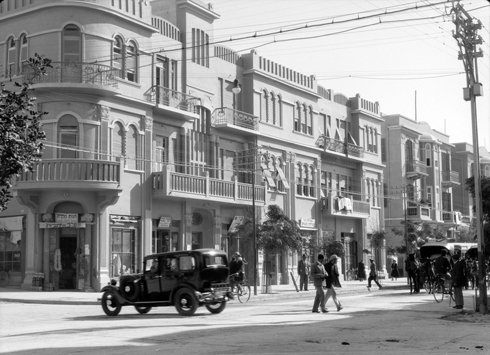 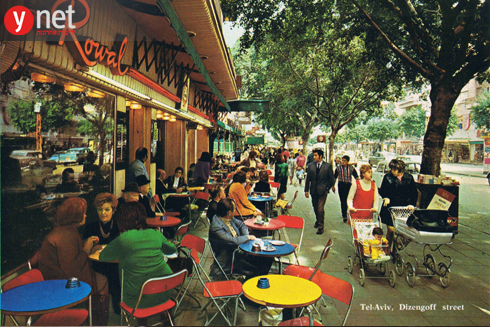 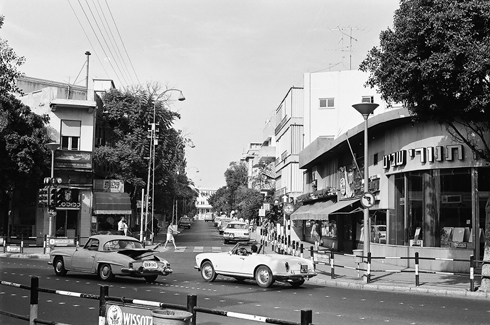 A glance at antiquity. From Allenby Street to Bialik Street, Shavit Ovens on the right and the most famous pastry shop, Kapulsky, on the left (photo courtesy of photographer Shlomo Menashe) 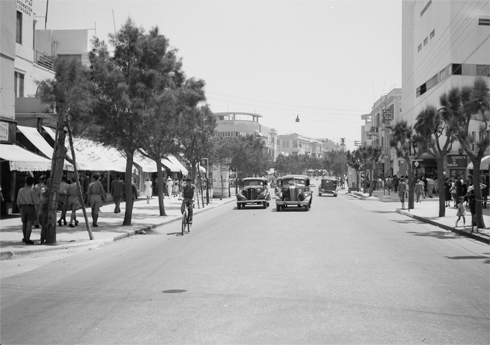 A second glance. Allenby Street. Star of David Square is seen in the background as well as Rimon Cinema on the right, which later turned into Allenby Cinema and the Allenby 58 Club (Photo: Eric Matson, Library of Congress / American Colony) 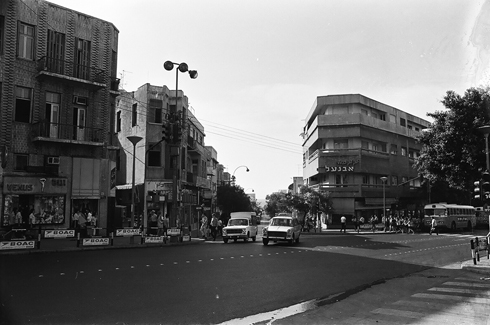 Just another weekday. The corner of Allenby and Hess Streets (photo courtesy of photographer Shlomo Menashe) 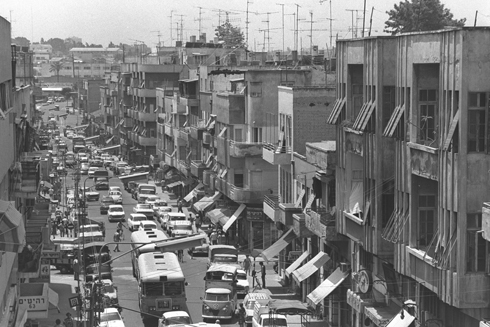 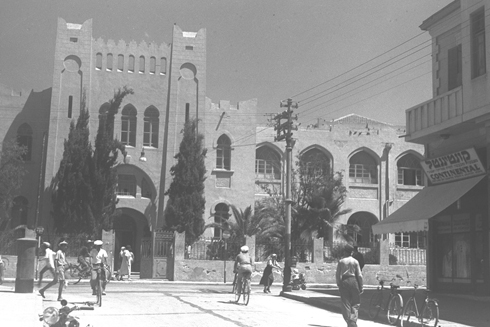 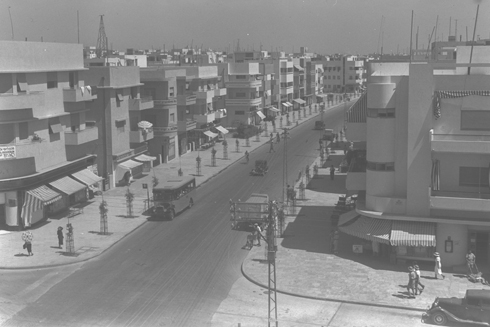 Sharing this beauty with everyone

"I was born in the city of Tel Aviv. I grew up in Jaffa, my father comes from Hatikva Neighborhood, and we have a long family history in the city," says 25-year-old Shai Rajoan, the person behind a Facebook page called White City – Tel Aviv, which shares photos from the Israeli metropolis' rich past, in black and white and in color.

The pictures are taken from Rajoan's private collection as well as from other people's collections and from the Government Press Office, which has been cooperating with him and contributing to the page's popularity. 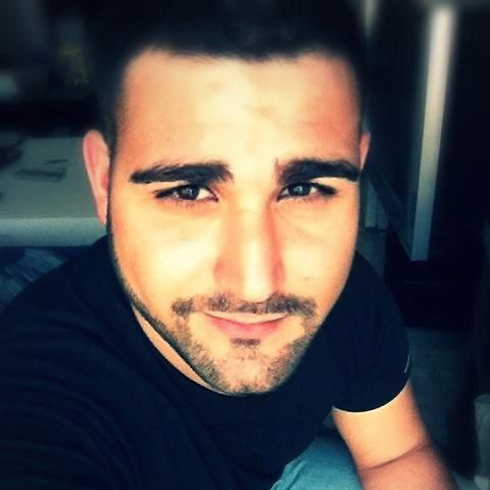 "I have always been drawn to the city's beauty, and from an early age I began buying postcards of the city," he says. "Later on, I also purchased books, pictures and collections from people who were looking to get rid of them."

Shai started the page without any intentions of making a profit. "I wanted to share the beauty of this city with the entire public through the pictures and aesthetics of Tel Aviv, which reflect the origin and culture of its residents," he tells Ynet.

"My only goal is to continue exploring the city and all its aspects. I would like to see the city develop, alongside a preservation process which is taking place in many cities around the world." And why would a 25-year-old man rummage through archives containing photos which are three times his age? Rajoan has a ready, clear answer: "One can be a collector and love nostalgia at any age. You get connected and drawn into the issue all the way, and it pulls you into a world you don't feel like leaving. And it really doesn't matter how old you are."

'The sea has been destroyed'

Rajoan has a lot of criticism against the lack of preservation of buildings in the city, and against the Tel Aviv Municipality's decisions. "It's more important for the municipality to build towers in the city than to preserve the past," he claims.

"The Shalom Meir Tower, for example, is being preserved, but one cannot ignore the fact that quite a few beautiful buildings have been destroyed in the center of the White City." He presents the shoreline as an example. "The sea has been destroyed. There is almost no promenade as there used to be in the past. It's all granolith. In the past, the promenade was much wider and wrapped by trees. "The Tel Aviv sea was opened in the 1920s. what is left of it? Look at what is happening at the Dolphinarium. I thought they were going to destroy the place and leave the promenade, but instead they approved the construction of additional towers. "The residents want to see the sea. You can't just block and block. When the sea is blocked, the winds break the trees, because the air doesn't come in but gets locked between the towers, but that's a different story. There's a reason why in the past they only approved the construction of two or three floors and that's it." Today Rajoan lives in the Florentin neighborhood, an area which is also lacking preservation. "Southern Tel Aviv has become a filthy area," he says. "We live between rats and cockroaches and there is a sewer overflow. Not a single building here has been preserved, and the area is filled with Bauhaus structures… It's unfortunate that in our city buildings are being destroyed rather than renovated." Rajoan wants Tel Aviv's residents to look at the city's sooty buildings properly. For example, Allenby Street's beautiful buildings, most of which are rickety. "I am aware of the fact that the costs are high, but in the entire world the policy is to preserve rather than destroy and build a modern building which fails to show the city's real character," he explains.

Is there anything optimistic you do see in the city?

"The city is developing towards modernism. That can be seen, for example, on Habima Square between Habima Theater and the Charles Bronfman Auditorium. The city is beautiful and adorned, but every corner has been wrapped with concrete.

I hope that the Dizengoff Square is lowered to the ground again and that the southern part of the city returns to its glory days.

"It's important for me that people will love, connect and study the first Hebrew city. It's important to preserve history and not to forget where we came from. We built here a city from sand and sand, and we must honor these achievements."

פרסום ראשון: 09.01.14, 00:19
commentsend to friendshareshare
See all talkbacks Close all talkbacks
new comment
Next
Previous
Warning:
This will delete your current comment
cancelOk