Tribal leaders and clerics from Iraq's Sunni heartland offered their conditional backing on Friday for a new government that hopes to contain sectarian bloodshed and an offensive by Islamic State militants that threatens tear the country apart. One of the most influential tribal leaders said he was willing to work with Shi'ite prime minister-designate Haider al-Abadi provided a new administration respected the rights of the Sunni Muslim minority that dominated Iraq under Saddam Hussein. Ali Hatem Suleiman left open a possibility that Sunnis would take up arms against the Islamic State fighters in the same way as he and others joined US and Shi'ite-led government forces to thwart an al Qaeda insurgency in Iraq between 2006 and 2009. 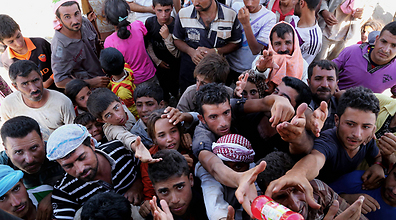 Ethnic Yazidi faced potential genocide as they were trapped by ISIS forces in Iraq. (Photo: AP)
Abadi faces the daunting task of pacifying the vast desert province of Anbar. It forms much of the border with Syria, where the Islamist fighters also control swathes of territory. Sunni alienation under outgoing Shi'ite premier Nuri al-Maliki goaded some in Anbar to join an Islamic State revolt that is now drawing the United States and European allies back into varying degrees of military involvement in Iraq to contain what they see as a jihadist threat that goes well beyond its borders.

Iraq has been plunged into its worst violence since the peak of a sectarian civil war in 2006-2007, with Sunni fighters led by the Islamic State overrunning large parts of the west and north, forcing hundreds of thousands to flee for their lives and threatening ethnic Kurds in their autonomous province. Winning over Sunnis will be vital to any efforts to contain the violence marked by daily kidnappings, execution-style killings and bombings. Taha Mohammed al-Hamdoon, spokesman for the tribal and clerical leaders, told Reuters that Sunni representatives in Anbar and other provinces had drawn up a list of demands. This would be delivered through Sunni politicians to Abadi, a member of the same Shi'ite Islamist party but with a less confrontational reputation than Maliki, who announced on Thursday he would stand down. Hamdoon called for the government and Shi'ite militia forces to suspend hostilities in Anbar to allow space for talks. "It is not possible for any negotiations to be held under barrel bombs and indiscriminate bombing," Hamdoon said in a telephone interview with Reuters. "Let the bombing stop and withdraw and curtail the (Shi'ite) militias until there is a solution for the wise men in these areas."

Sistani told the country's feuding politicians to live up to their "historic responsibility" by cooperating with Abadi as he tries to form a new government and overcome divisions among the Shi'ite, Sunni and Kurdish communities that deepened under Maliki. Abadi himself, in comments online, urged his countrymen to unite and cautioned that the road ahead would be tough. Sistani, a reclusive octogenarian whose authority few Iraqi politicians would dare openly challenge, also had pointed comments for the military, which offered no serious resistance when the Islamic State staged its lightning offensive in June. "We stress the necessity that the Iraqi flag is the banner they hoist over their troops and units, and avoid using any pictures or other symbols," Sistani said, in a call for the armed forces to set aside sectarian differences. Maliki was blamed for blurring lines between the army and Shi'ite militias. Maliki ended eight years in power that began under US occupation and endorsed Abadi in a televised late-night speech during which he stood next to his successor. The appointment of Abadi has drawn widespread support within Iraq but also from the United States and regional Shi'ite power Iran - two countries which have been at odds for decades. "The regional and international welcome is a rare positive opportunity ... to solve all (Iraq's) problems, especially political and security ones," Sistani said in comments which were relayed by his spokesman after weekly Friday prayers in the Shi'ite holy city of Kerbala, south of Baghdad.

Arms for the Kurds

After its capture of the northern metropolis of Mosul in June, a swift push by the Islamic State to the borders of Iraqi Kurdistan alarmed Baghdad and last week drew the first US air strikes on Iraq since the withdrawal of American troops in 2011.

The United States has asked European countries to supply arms and ammunition to the Kurdish forces, US and European officials have said. In Brussels, European Union foreign ministers decided that individual member states were free to send weapons to the Kurds, provided they had the consent of Iraqi national authorities. Meeting in emergency session, the EU said it would also look at how to prevent the Islamic State, which has overrun some oilfields in Syria and Iraq, benefiting from oil sales. Several European governments, including France, Britain, Germany, the Czech Republic and the Netherlands, have said they will send arms to the Kurds or are considering doing so. Sweden and Austria were among those which will not, but the 28-nation bloc avoided a repetition of last year's internal dispute over arming the Syrian rebels. Canada is sending two military transport planes to deliver weapons to the Kurds. "Canada will not stand idly by while the Islamic State continues its murder of innocent civilians and religious minorities," Prime Minister Stephen Harper said.

In Geneva, the United Nations said around 80,000 people had fled to the relative safety of Dohuk province on the Turkish and Syrian borders, part of the 1.2 million Iraqis who have been displaced inside the country this year.

Dan McNorton of the UNHCR refugee agency said their plight was severe. "People are exhausted, people are very thirsty, these are searing temperatures," he told a news briefing, adding that children and old people were among those forced to walk for days without food, water or shelter. Several thousand remained on the barren tops of the Mount Sinjar range, where members of the Yazidi religious minority fled the militants, who consider them "devil worshippers". On Thursday, President Barack Obama said the Islamists' siege of Mount Sinjar had been broken and he did not expect the United States to stage an evacuation or continue humanitarian air drops. However, McNorton said help was still needed. "That situation remains very dramatic for those people, regardless of how many people are on the mountain. It is of critical importance to ensure that they get the assistance and support that they need from the international community," he said. The Islamic State has also seized large parts of Syria as it tries to build a caliphate across borders drawn by European imperialists a century ago. The leader of the Shi'ite Lebanese group Hezbollah said the Sunni militants could widen their threat to include Jordan and Saudi Arabia, Kuwait and other Gulf states, as well as region's varied communities. "This danger does not recognize Shi'ites, Sunnis, Muslims, Christians or Druze or Yazidis or Arabs or Kurds. This monster is growing and getting bigger," said Sayyed Hassan Nasrallah, whose group has been helping President Bashar al-Assad fight the Sunni Islamist-dominated insurgency in Syria.