Conference to be held in Egypt prior to international conference on Sept 22, condition rehabilitation with 'some sort of demilitarization' of Gaza, finance minister tells Ynetnews.

In an exclusive interview with Ynetnews, the finance minister presented his diplomatic initiative for the disarmament of Gaza and the transfer of control of the Strip to the Palestinian Authority.

Lapid envisions a regional conference hosted by Egypt that would include other moderate actors in the area like Saudi Arabia, Jordan, the Gulf states and representatives from the Quartet (US, UN, EU and Russia), as well as Israel and the Palestinian Authority. "Finance Minister Lapid said that Operation Protective Edge cannot, and will not, end without a diplomatic front. Without a diplomatic process any attempt to find a solution will simply begin the countdown to the next outbreak of violence. Only a diplomatic process can make stability possible and create the foundation for a future solution," a statement from Lapid's office said.

The regional conference would also focus on rehabilitating the Gazan economy and creating economic ties between Israel, the Palestinian Authority and the Arab world. This part of the conference would include participants from Norway, the United Nations, the United States, the Quartet, World Bank, Canada, Japan, Russia, Jordan, Saudi Arabia and Tunisia. 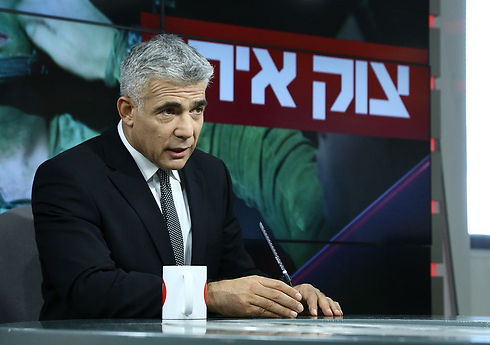 Finance Minister Yair Lapid talking to Ynet (Photo: Ofer Amram)
The four aims of the conference are: Speaking on the ongoing ceasefire negotiations in Cairo, Lapid stressed that Israel's delegation is compiled of military and other security officials to ensure any deal would guarantee the security of Israel, particularly southern residents in the direct line of fire. "We need this to be some sort of an arrangement that ensure(s) that there won't be another circle of violence within six months, otherwise there's no reason for us to get to any kind of settlement," he told Ynetnews. The finance minister discussed how the tables have turned, and instead of collecting tax money from citizens, the Finance Ministry is giving money to the citizens of the south - in the form of compensation and aid to those affected by the fighting in Gaza. He also invited both the citizens of Israel and tourists from abroad to visit the Holy Land. "I strongly recommend the people of Israel, first and foremost, to do some internal tourism. Instead of going to Turkey and support(ing) the Turkish economy and the Turkish tourism industry, to go to Israel. We have a beautiful country (and) it's a great season to tour around with the children," he said. To tourists from around the world Lapid said that while "there is a problematic situation that will be solved soon, it's a beautiful, historic land and you can't live and die without visiting Israel at least once."