Netanyahu's bureau says the president and the prime minister have ideological differences, but that's not the root of it. Nor is it truly personal.

Two weeks ago, Hillary Clinton gave a comprehensive interview to Mideast expert and Bloomberg and Atlantic columnist Jeffrey Goldberg, in which she expressed 100 percent (or close to 100 percent) support for the IDF operation in Gaza and the Israeli government's positions on the Palestinian Authority.

Any skilled reader could understand from the interview that 1. Clinton will be facing presidential elections in two years; 2. She is currently in dire need of Jewish donors; 3. She wants to distance herself from Barack Obama and his foreign policies. Several days after the interview was published, I received a request from one of the more famous personalities of the American Jewish establishment, a supporter of the Republican Party. He wanted me to convince Israelis that Clinton is a liar and not really a supporter of Israel. I had to smile. It is not every day that one encounters such a staunch Zionist, loyal to Israel to the very last drop of blood, so irate about the pro-Israel comments of an American public figure. Wondrous are the ways of the Jews. The problem is the American Jewish activist is never alone. The Israeli prime minister's bureau is always at his side, shoulder to shoulder. Political considerations have always been a part of relations between Israel and the United States, and are certainly felt in Israeli elections. In general, however, the voters ignore any outside intervention and vote as they see fit, and in some circumstances, this has even backfired. 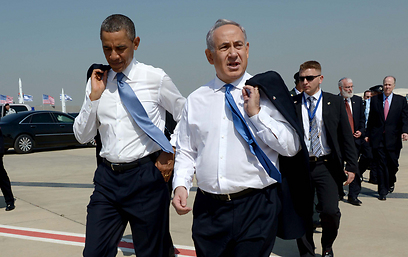 Netanyahu welcomes Obama to Israel, March 2013 (Photo: GPO)
The first, rather crude intervention actually came from the Americans. In an old State Department document appears a telegram from James McDonald, the US envoy (and later ambassador) to the nascent Israel, who called for the newborn state to be granted an American loan on the grounds that David Ben-Gurion was on the eve of an election against his rival Menachem Begin, a suspected Soviet sympathizer. It was a demonstration of the American ambassador's ignorance of Israeli politics, but the loan was approved, and Israel saved from starvation.

Yitzhak Rabin tried to help Richard Nixon get reelected in 1972; Bill Clinton tried to help Peres in the 1996 elections; Benjamin Netanyahu has tried to help a host of Republican candidates, including Mitt Romney, Obama's rival in 2012. The warm reception Romney received during his visit to Israel on the eve of the presidential elections was a source of amusement in the United States.

In another two and a half months, US Congress will hold its midterm elections, and all seats in the House of Representatives and one-third of those in the Senate will be up for grabs. The Democrats could well lose their majority in the Senate, thereby handing complete control of Congress to the Republicans. If this should happen, Obama will be a lame duck president – the Republicans would dismiss his every bill, every budgetary decision. Within the space of one day he would become a has-been. The Congressional elections are now the most important thing in the American political system. Each and every world event, from Gaza to Mosul, Kiev to Cairo, is measured by its potential impact on the November ballot. From Obama's perspective, this is a life and death struggle. It is for his rivals as well.

The White House views Netanyahu as a foot soldier in the service of the extreme-right branch of the Republican Party. They long ago came to the conclusion that Sheldon Adelson - the casino magnate who blew $100 million on his efforts to oust Obama - does not work for Netanyahu, but rather Netanyahu works for Adelson. 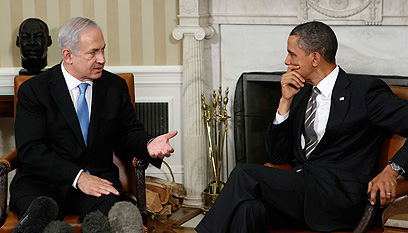 Netanyahu and Obama meeting at the White House (Photo: Reuters)

It almost doesn't matter what Netanyahu says or does, for what he is responsible and for what others are, everything emanating from Jerusalem is seen as an attempt to sabotage the chances of Democratic electoral candidates.

Netanyahu's Republican friends have a packed agenda on domestic issues, from curtailing immigrant rights to issuing gambling licenses and banning gay marriage. Israel has no interest in any of these issues, nor is it welcome to do so.

The Prime Minister's Bureau in Jerusalem explains that Obama and Netanyahu have ideological differences. Even if there's a grain of truth in that, that is not the problem. Nor is it personal. The problem is that Netanyahu has become a domestic political enemy of the president and his party. This is a misstep of historical proportions, as it places Israel outside of the American consensus for the first time since the 1950s. This is also a problem in practical terms. Supposing the Democrats hold on to Senate control - the White House will remember where the Israeli government had positioned itself in this battle. Supposing the Democrats cede control of the Senate – the president would lose his grip on domestic issues, and focus on foreign affairs, as many of his predecessors have done. Thus Israel would meet Obama again, this time as wounded president. After all, it has happened to us in the past, with a certain Jimmy Carter.