Weapons found in the West Bank.

Palestinian President Mahmoud Abbas replied to Shin Bet claims Monday, that Hamas was responsible for attempts to incite a third intifada in the West Bank and topple the Palestinians Authority government, saying that he was following the reports with great concern.

Abbas warned that the developing information posed a serious threat to the future of the Palestinian Unity government. In his statement, the Palestinian leader repeatedly stressed the name Hamas to more severly highlight the organization behind the foiled attempt some are calling a coup.

The Shin Bet revealed earlier that the investigation of 93 Hamas activists arrested across the West Bank in recent months revealed that they participated in planning a series of mass attacks on Israeli targets – with a focus on violence in the Temple Mount compound – in order to instigate a third intifada.

The plan called for using the intifada as cover to seize rule in Ramallah, which would have been led by the "Mohammed Deif of the West Bank" who currently operates out of Turkey. More than 70 indictments were served in recent days at military tribunals in the West Bank, and they expose the largest coordination effort Hamas has attempted in the area since Operation Defensive Shield more than a decade ago. Under the framework of the planned operation, terror cells were created in 46 Palestinian towns and villages – in Jenin, Nablus, East Jerusalem, Ramallah, and Hebron. 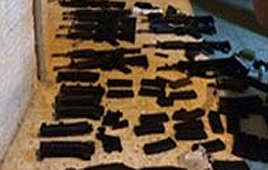 Weapons discovered in the house of a Hamas operative in the West Bank.
The infrastructure for the operation was exposed in May, along with the identity of its leader, Hamas operations officer Saleh al-Arouri, who remains in Turkey, according to the Shin Bet.

Ynet was told that in recent months there was an active movement of Hamas activists arriving to Hebron from abroad. These operatives were known to security forces to be loyal to al-Arouri.

The operatives were assisted by Jordanian couriers, who transferred $600,000 – $50,000 in each border run. The funds were moved through Turkey and Jordan and were intended to purchase vehicles and safe-houses.

The Shin Bet confiscated the cash, as well as 24 M-16 rifles (not of Israeli manufacture), six handguns, and seven missile launchers, magazines, and loads of ammunition.

Money that was transferred to the West Bank.
Al-Arouri was released from Israeli prison several years ago; he was one of the Hamas officials involved in the negotiations for the release of captured IDF soldier Gilad Shalit. In recent years sources in the security establishment have named him as the source shaping terror operations against Israelis in the West Bank. At the head of the military infrastructure in the West Bank stood Riyad Nasser, who was arrested several months ago – but whose interrogation only started in the summer after terminated his hunger strike. Palestinian engineering and chemistry students were recruited for the operation. One of the most notable detainees holds a doctorate in computer science – he was recuited in Malaysia and trained in encryption and cyber-attacks. "The discovery of the infrastructure attests to the great danger posed by Hamas' headquarters abroad given its strategic plan to collapse the Palestinian Authority," said the Shin Bet.

"Khaled Mashal was aware of this and the Turkish government knew about the operations emanating from its territory. The PA's security forces received updates about the investigation. Hamas' plan was the same as its seizure of the Strip in 2007. Al-Arouri is the Mohammed Deif of the West Bank."


פרסום ראשון: 08.18.14, 18:05
commentsend to friendshareshare
See all talkbacks Close all talkbacks
new comment
Next
Previous
Warning:
This will delete your current comment
cancelOk