A photograph has emerged of UK Consul General to Jerusalem Alastair McPhail wearing a keffiyeh scarf that bears the image of a Palestinian flag superimposed over a map of the whole of Israel, West Bank and Gaza, with the words "Free Palestine" emblazoned next to it.

The image appears on the Islamic Relief Palestine website, under the headline "British Consulate visits Islamic Relief in Gaza", and was taken during a visit McPhail paid earlier this year to Gaza City for the opening of a new lab at Al-Azhar University, a project apparently co-sponsored by the British government.

The design of the scarf appears to advocate the destruction of Israel and the creation of a Palestinian state in its stead.

Right-wing website Breitbart reported Monday that it had contacted the British Foreign Office about the issue, but the FO refused to refer directly to the image. The query, Breitbart said, "was met with a pro-forma response about the two-state solution, largely ignoring our line of questioning about the appropriateness of the scarf." 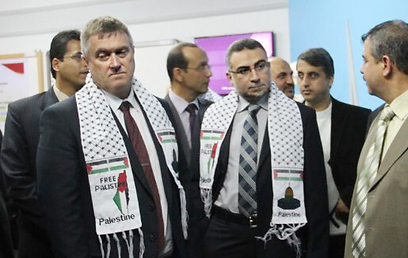 The British government has long been a staunch supporter of Israel, with Prime Minister David Cameron making a speech in the Knesset earlier this year. However the situation in Gaza over in recent weeks has seen Israel come under fierce criticism from politicians and the population alike. There have also been frequent reports of a dramatic rise in anti-Semitic incidents in the country.

Tens of thousands of people have marched in London and Manchester in support of the Palestinians, and to condemn Israel's military operation. Last week, British MP George Gallaway, known for his hatred of Israel and support for Arab leaders such as former Iraqi president Saddam Hussein and Syrian ruler Bashar Assad, declared his city of Bradford an "Israel-free zone".

There has also been a spate of protests inside British and Irish supermarkets, targeting products the protesters deem to have a connection to Israel. The decision several days ago by a branch of Sainsbury's in London to remove all of its kosher produce in order to avoid a confrontation with pro-Palestinian protesters was met with outrage and drew a quick apology from the supermarket chain.

McPhail has been serving in Jerusalem since January. In July 2011, he became Britain's first official ambassador to the new country of South Sudan, after having previously served there as consul general.