Three were lightly wounded and a 25-year-old was in critical condition Friday night when a rocket from Gaza struck a road in the area of Ashdod. The attack came at the tail end of a day of heavy rocket fire from Gaza.

A 4-year-old child named Daniel Tregerman was killed in the evening after being critically wounded in the Sha'ar HaNegev Regional Council by mortar fire during a large barrage of rocket fire from Gaza that also reached central Israel.

Security sources later claimed that the mortar fire that killed Tregerman had been fired by militants from within an UNWRA school in the northern Gaza neighborhood of Saja'iyya.

Hamas claimed responsibility for the fire on central Israel, saying that they had aimed for Ben Gurion International Airport. Iron Dome intercepted one rocket over Tel Aviv during the barrage.

At least 130 rockets were fired at Israel on Friday in total, with one landing a direct hit on synagogue in Ashdod, lightly wounding two and putting one woman in moderate condtion. Ten were treated for anxiety on the scene. 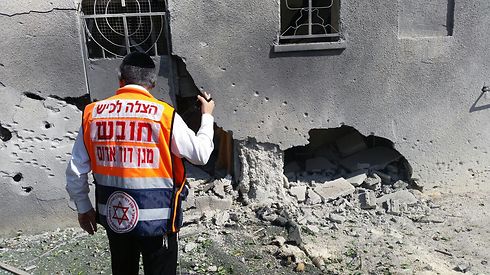 Iron Dome intercepted a rocket over Be'er Sheva late Friday evening and another two projectiles fell in open areas during the same barrage.

Earlier rockets fell near a preshcool in Be'er Sheva, wounding a man while another landed meters from another preschool in the south. The heavy-handed attacks on Friday came after a quiet night gave residents a much needed rest from renewed fighting which have seen a record number of rockets slam into Israel. 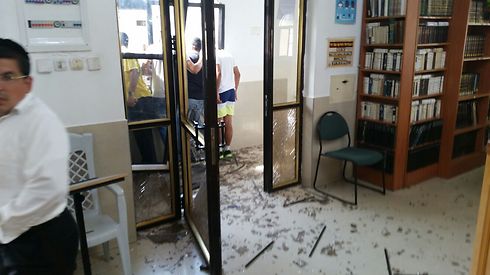 In the late afternoon hours, an apartment in Sderot also suffered a direct hit by a rocket from Gaza. Reports from the scene indicated that nobody had been injured in the attack.

Meanwhile, a Gaza health official said four Palestinians were killed in an two seperate IAF airstrike as fighting continued for a third day after the collapse of Egyptian-led cease-fire talks. A rocket was fired at Tel Aviv in the early afternoon, but fell in an open area, failing to cause damage. Hamas claimed responsibility for the attack.

A 52-year-old Israel man was moderately wounded from shrapnel in his arms after a rocket hit in Be'er Sheva noontime Friday; damage was also reported and he was taken to a local hospital. 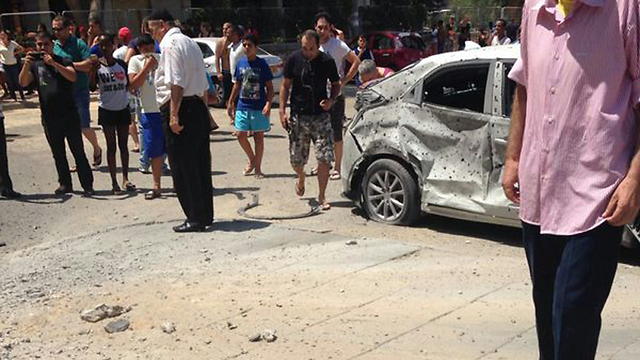 As part of the salvo, three rockets were fired at the city, two were intercepted while a third fell in an open area.

Dani Schtrukerman, the paramedic who took care of the man, said "when we arrived at the scene we saw heavy damage to the surrounding buildings and cars and shattered glass was everywhere. Citizens took us to a 54-year-old man who had massive shrapnel wounds on his arms. He told us he was hiding between two buildings when the rocket het, sending shrapnel his way." The hospital said he was in light to moderate condition.

Damage in Be'er Sheva in wake of rocket hit

The salvo which wounded the man was followed by a rocket barrage at Sderot, three of which were intercepted by Iron Dome. Two more rockets fell in Eshkol an hour later, causing damage to a local house.

Earlier, at least five rockets hit the south, mostly the Eshkol Regional Council, during the late morning hours, with one of the rockets landing 12 meters from a pre-school. Two rockets fired at Ashkelon were intercepted by Iron Dome and later two others fell in open areas near Netivot, with one also being intercepted above the town. 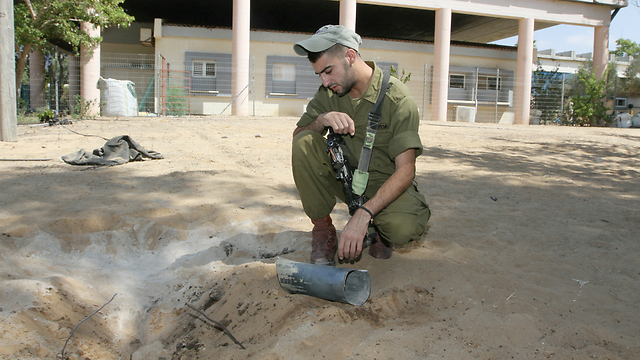 Sirens pierced the early morning silence, waking residents of the Eshkol Regional Council, which has suffered the majority of rocket hits in recent days, and informed them of incoming rocket fire shortly after dawn.

A rocket then exploded in an open area in Eshkol, and was followed by another rocket which fell outside one of the regional council's communities. Afterwards, a third rocket slammed into an open area in the Hof Ashkelon Regional Council, while Iron Dome intercepted the fourth shortly after.

According to the IDF, five more rockets were fired since midnight, though no sirens were reported until 6 am. 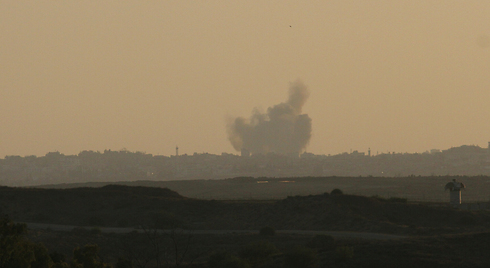 The IDF said it carried out 20 airstrikes early on Friday, targeting rocket launchers and weapons sites, and Gaza health official, Ashraf al-Kidra, says two workers were killed at a livestock farm that was hit in the airstrike.

Two men aged 22 and 24 were killed in a strike on Nusseirat refugee camp early on Friday, emergency services said.

Two more were killed in an air raid near neighboring Deir al-Balah.

Earlier this week, Hamas rejected an Egyptian truce proposal under which Israel would gradually ease its blockade of Gaza, without giving specific commitments.

Hamas demands a lifting of the border closure, imposed by Israel and Egypt after the militant group's takeover of the coastal strip in 2007.

Responding to the killing of the three, senior Hamas political leader Ismail Haniyeh said late Thursday that his group would not budge from its demands.

The IDF said aircraft hit more than 30 sites across Gaza and that militants fired more than 100 rockets and mortar bombs into Israel Thursday. A mortar bomb that landed near a kindergarten in a kibbutz badly wounding a man in his 30s, who sustained serious chest wounds when he was hit by shrapnel in the Eshkol-area kibbutz.

Earlier in the evening, around 7:30 pm, a number of sirens sounded in Be'er Sheva and other Negev communities. Iron Dome intercepted two rockets, and three others exploded in open areas. Damage was caused to a cowshed in the Yoav Regional Council.

Immediately after the Code Red sirens sounded in Be'er Sheva, the Magen David Adom call center received a report about a pedestrian who had been hit by a car while running to a protected space in Be'er Sheva. MDA paramedics evacuated the man, who suffered a head injury, to Soroka Medical Center in the city.