Graffiti on walls of vandalized Copenhagen school included slogans 'No peace in Gaza' and 'No peace to you Zionist pigs.'

A Jewish school in Copenhagen had its windows smashed and anti-Jewish graffiti referring to the conflict in Gaza spray-painted on its walls, the school said Friday.

"We know that a political message has been written on the walls but we don't know who is responsible," Jan Hansen, headmaster of Carolineskolen, told AFP. 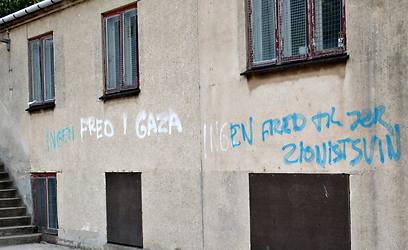 Messages daubed on the school walls included "No peace in Gaza" and "No peace to you Zionist pigs."

"There have been parents who didn't want to send their children to school today and there have been some children who were sad and a bit afraid who we had to send home," Hansen said.

Founded in 1805, the school, which includes a nursery, describes itself as the world's second oldest still functioning Jewish school.

A rise in the number of reported anti-Semitic crimes in Denmark last week prompted local politicians to organise a "kippah march" in central Copenhagen in support of Jewish people's right to display their religion openly.

There has been growing concern over the rise in anti-Semitic attacks in Europe, as pro-Palestinian protesters have targeted local Jewish communities over the conflict in Gaza.

In France, anti-Israel demonstrators tried to break into two Paris synagogues and vandalized a kosher butcher shop. In Britain, anti-Semitic attacks have risen to record highs since the start of the conflict, the Community Security Trust, which advises the some quarter of a million British Jews on safety, said last month.