Netanyahu: No immunity for anyone who fires rockets

After Egypt urged sides to renew talks, Egyptian diplomat says Cairo expects to receive responses from both Israel and Hamas by Monday; Israeli leaders say operation not over yet.

Prime Minister Benjamin Netanyahu convened his Cabinet Sunday for its weekly meeting, after southern Israel was hit with 15 rockets in the morning, and Saturday night saw at least five rockets fired from Syria and Lebanon at the northern Golan Heights and the Western Galilee, hitting an empty house.

"In recent days we have proven there is no immunity for those who fire at Israel's citizens. This is true in all sectors and regarding all borders. We are determined to complete the mission," Netanyahu said in refrence to rocket fire at Israel from both the north and the south. 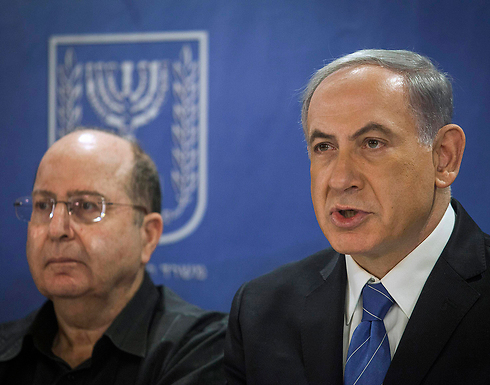 Regarding the operation in Gaza, Netanyahu said that "Operation Protective Edge will continue until its goals are achieved," adding that this "could take time".

"Many states in the region and in the West are beginning to understand that this is a single front, that Hamas is ISIS and ISIS is Hamas. They act in the same way. They are branches of the same poisonous tree. They are two extremist Islamic terrorist movements that abduct and murder innocents, that execute their own people, that shrink at nothing including the willful murder of children.

"In recent days we heard from Hamas spokesmen that they admit to what we have been saying all along, that they murdered Eyal, Gilad and Naftali," Netanyahu said, adding that "Both movements are, in effect, making an effort to establish Islamic rule, caliphates, without human rights, across wide areas, by slaughtering minorities, by not respecting the human rights of anyone."

Addressing growing anger by residents of Israel's south, who were told they could return home before ceasefire efforts collapsed and fighting started anew, Netanyahu said: "Residents of the area adjacent to the Gaza Strip...I appreciate your resilience. I appreciate your suffering and I share your pain.

"We will do our utmost to help you through these difficult days. At the next Cabinet meeting, we will approve an extraordinary package of assistance for your communities. We are with you and we will stay with you until quiet is achieved, and afterwards as well," he added.

"The more determined and patient we are, the more our enemies will understand that they will not succeed in wearing us down. Against their attrition, they will be struck very hard...The IDF is continuing to strike very hard at Hamas and the other terrorist organizations in the Gaza Strip and will continue to do so until the goal is achieved."

Defense Minister Moshe Ya'alon was also present, and addressed residents' anger, saying Israel was "in the midst of a complex operation, and we cannot present a simple image. There are no magic solutions.

Indirect ceasefire talks mediated by Egypt to end the conflict collapsed after rockets were fired from Gaza during a truce and Israel responded with air strikes.

The Egyptian Foreign Ministry on Saturday called on both sides to resume talks. Palestinian President Abbas, in Cairo after meeting President Abdel Fattah al-Sisi, also urged a swift resumption of negotiations. A senior Egyptian diplomat said Abbas had informed Sisi that Hamas was prepared to come to Cairo for further talks, but Hamas did not immediately confirm the report. Israel also had no immediate comment. The Egyptian diplomat said Cairo expected to receive responses from both Israel and Hamas by Monday. The talks, conducted in Cairo, have not involved direct meetings between Israeli officials and representatives of Hamas. Israel considers Hamas a terrorist organization and Hamas, for its part, refuses to recognize Israel. Egyptian officials shuttle between the two sides. Hamas has said it will not stop fighting until the Israeli-Egyptian blockade on Gaza is lifted. Both Israel and Egypt view Hamas as a security threat and are reluctant to make sweeping concessions without guarantees weapons will not enter the economically crippled enclave. Cairo talks

The Cairo talks had aimed to secure a lasting deal to open the way for reconstruction aid to flow into the Gaza territory of 1.8 million people, where thousands of homes have been destroyed.

"My main goal is for the truce talks to resume in Egypt as soon as possible to avoid more casualties," Abbas said in Cairo. Hamas spokesman Sami Abu Zuhri said the movement was "in favor of any real effort that will secure the achievement of Palestinian demands and we will study any proposal when presented." Saturday's violence took place a day after a four-year-old Israeli boy was killed by a mortar attack from Gaza, leading Netanyahu to threaten to escalate the fight against Hamas. The boy was the first Israeli child to have died in the conflict. The United Nations says about 400,000 Gazans have been displaced and more than 400 children killed in the longest and deadliest violence between Israel and the Palestinians since the second Intifada, or Palestinian uprising, a decade ago. Israel pulled ground forces out of Gaza more than two weeks ago, after saying they had destroyed a network of Hamas tunnels used for cross-border ambushes. But Netanyahu last week granted provisional approval for the call-up of 10,000 army reservists, signaling the possibility of heightened military action. Hamas leaders said on Saturday they had signed off on Abbas' bid to join the International Criminal Court (ICC), a move that could open both Israel and the militant group to war crime probes over the Gaza conflict. If the Palestinians were to sign the ICC's founding treaty, the Rome Statute, the court would have jurisdiction over crimes committed in the Palestinian territories. An investigation could then examine events as far back as mid-2002. Israel and Hamas have traded accusations of war crimes and both defend their military operations as consistent with international law.