Parents of Daniel Tregerman: We will never return home to Nahal Oz

Parents of four-year-old killed by Gaza mortar fire recall painful last moments with their son; mother: 'There is no chance we'll return.'

Three days after their son, Daniel Tregerman, was killed in Kibbutz Nahal Oz by mortar fire from Gaza, his parents have chosen to address the press.

Doron, the father, recalled the tragedy. "The lethal mortar hit after a few had fallen in the area; the siren sounded while we were at home. The kids were playing in the living room, there was a siren – and the siren scares everyone. We reach for the kids, Uri, and Daniel on my left, Yuval on my right." 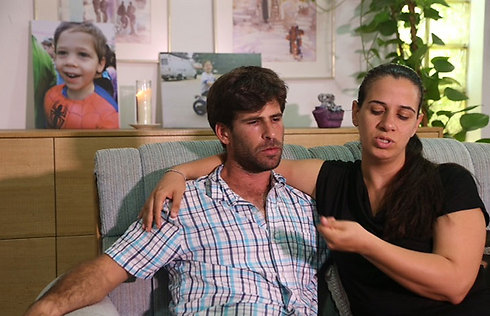 Doron and Gila Tregerman (Photo: Motti Kimchi)
He added, with great difficulty, "it all happened so fast, in three seconds. You realize it was not in an open area, that if it didn't land on top of you, it hit right on the other side of the wall. A hit that arrives in 3-4 seconds, in those seconds Daniel went outside and Daniel, I felt, passed in front of my eyes."

The father said his wide insisted he call for help. "I told her there is nothing she can do except for sooth the children. I already know there was no need for anyone to come. I went outside, I was by Daniel for a second or two; I covered him. That's it."

He emphasized: "We are trying to leave this inferno and we are leaving Daniel behind." 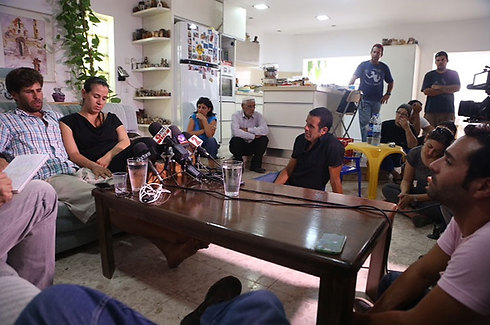 The mother, Gila, spoke of her last moments with her son. "He had a frozen stare in his eyes, maybe he was scared. Usually when there is a Code Red, he would be the first to run to the safe room, but this time he seemed to freeze."

"He didn't make it, something felt wrong. I had a bad feel, when the Code Red started, I had a really bad feeling," she said.

The mother spoke of their return to the family home after the ceasefire expired – before the fatal hit. "When we returned home, his toys were all over the place; suddenly he found another game, and another toy that he had missed and in the afternoon he laid on his bad and said, 'Oy, my bed, how I missed my bed.' He needed to, we all wanted to, return home."

On Monday, only a day after she laid her son to rest, his mother said the family was not intending to return to the kibbutz at the end of the shiva.

"There is no chance we'll return," she told Army Radio, "It's very clear now, there are no questions about it and I don't think there will be. This is not a 'calm' – these are our memories." Earlier on Monday, his mother said that "he was a sweet boy; the pictures that were released reflect who he really was. Everything he did, he did to the best of his ability. We always said he would be the youngest leader that will bring us towards peace. He really had those capabilities."